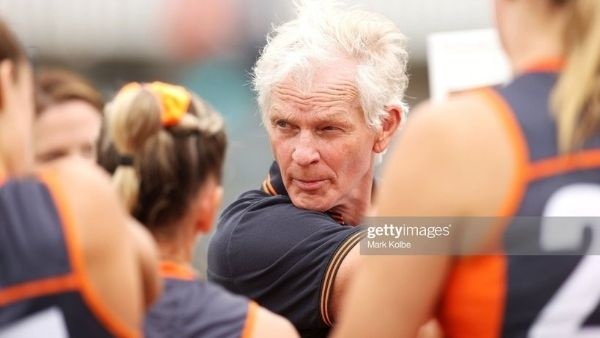 McConnell looking at the positives after disappointing loss to the Crows

Giants coach Alan McConnell was looking at the positives after a disappointing loss to the Adelaide Crows on Saturday afternoon.

McConnell looking at the positives after disappointing loss to the Crows

Giants coach Alan McConnell was looking at the positives after a disappointing loss to the Adelaide Crows on Saturday afternoon.

It was a tough day at the office for the GWS Giants after a 40 point loss to the Adelaide Crows with the Giants not registering a goal for the match.

It's the second week in a row that the Giants have struggled to get on the scoreboard with the match against Melbourne last week saw them only register one goal.

The loss last week created a disconnect within the Giants camp according to coach Alan McConnell, a disconnect that wasn't present in this match.

"Look the scoreboard is embarrassing, we can’t hide from it that’s how it is but I am proud of our girl's effort," McConnell said post-match.

"You know we’ve struggled to score for the last couple of weeks and I felt that created a disconnect within our group from last week, that wasn’t present today so in that context, I’m really proud.

While the Giants went down and not up this week, there were still lots of positives with the Giants able to match the Crows around most of the ground

"Potentially that’s the second week in a row that it gets worse, not better and I thought our effort and our energy around the ball was really good."

"What Adelaide showed us is that if you want to be a good team in this competition you’ve got to be able to execute and the speed at which we do it.

"I’m not talking about our fast how we run, I’m talking about how quickly we get the ball from hand to foot or how quick you get from one teammate to another or how quickly you decide you're going to switch the ball by foot and that you actually take to do it has to speed up if we want to compete with the big girls.

"If you look at all the numbers we’ve had as many uncontested marks and as much possession, time in forward half. Their ability to move the ball is far better than ours right now."

McConnell was looking at the positives and has urged fans to support the team when they face St Kilda on Wednesday.

"If you're disconnected and you're not playing well then you won’t fix it if you connect and you try really hard.

"There is a lot of better signs in today’s effort than last weeks and I’m very confident that we’ll put up a really good show and I encourage all our members and supporters to turn up at Blacktown on Wednesday because I know that they’ll see a good team that will play to win and I expect us to win."

Giants recruit Katie Loynes said that the team was really disappointed with the loss against the Crows.

"I’m pretty disappointed and I know that the girls are as well," Loynes said.

"When you look at a loss like that and not being able to score a goal is quite deflating but it’s such a short turn around and we play again on Wednesday night, you just have to bounce back and that’s what we’ll be doing."

The Giants will be playing three games within the span of eight-day, recovery will be the most important thing to get the Giants through.

"It’s all about recovery well and putting yourself in the best possible condition for each game and I know for myself I would love a seven-day break but it is what it is and we need to just recover well and regroup as a team."