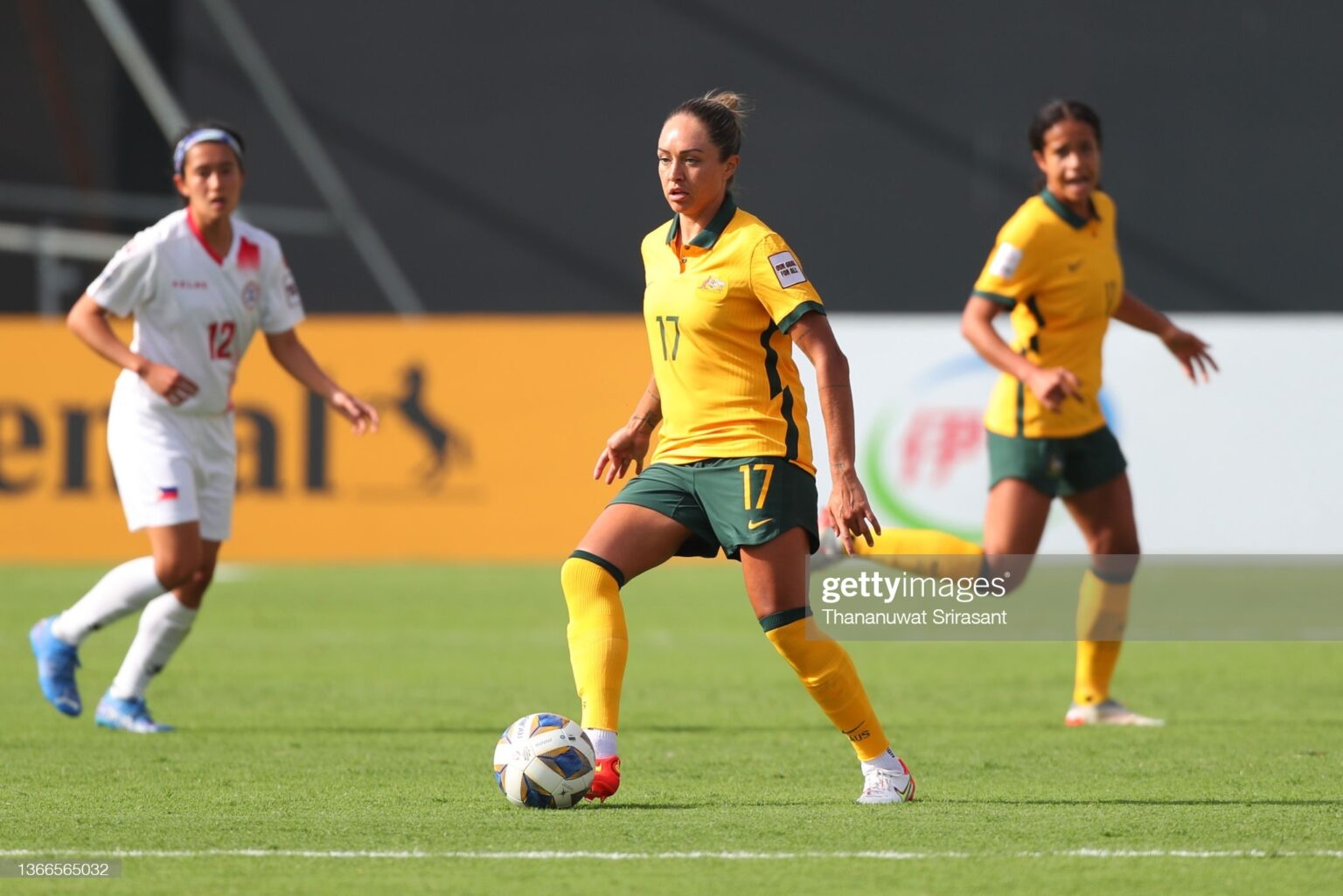 Matildas Waltz past the Philippines with strong second half

The Matildas were able to overcome a slow start to convincingly beat the Philippines 4-0 in their second Asian Cup match.

Matildas Waltz past the Philippines with strong second half

The Matildas were able to overcome a slow start to convincingly beat the Philippines 4-0 in their second Asian Cup match.

After a tense opening stanza, the Matildas came out after halftime and blitzed the Philippines' defence to run up the score to 4-0 in their second Asian Cup Group match.

The Australians were impatient in the first half of the match, as Alanna Kennedy, Ellie Carpenter and Sam Kerr all missed relatively straightforward chances.

The Philippines side was organised in defence, playing deep, and with good structures, meaning that every time the Australians did find themselves in the penalty area, they were rushed and feeling the pressure.

This organisation for the Philippines was bred from a long training camp for the team leading into the tournament, and paid off. The defensive structure the Filipino players played with prevented any easy goals in the first half, and made sure the Matildas were rushed every time they had an opportunity.

After wasting seven or eight good chances in the first half, the Australians would have been nervous going into halftime, but the nerves were eased shortly afterwards.

To nobody's shock, Sam Kerr was the first to score, making good use of a Steph Cately corner in the 50th minute as she headed past the goalkeeper.

Kerr was again at the forefront moments later, as another header was blocked, before Kyah Simon pounced on the loose ball to double the margin.

Once the Matildas had scored, the team seemed to relax a little bit, and take a calmer approach to breaking down the opposition defence.

After the hour mark, the Matildas were again pressing. In the 67th minute, Catley's corner fell a little short, and in the chaos in the box, Emily van Egmond found a way to tap the ball past the scrambling defence and into the net.

Matildas coach Tony Gustavsson then decided it was time to make some changes, bringing on debutant Cortnee Vine amidst three changes.

Vine, who plies her trade at Sydney FC, where she has impressed all season, joined with Holly McNamara, in her second game, and Courtney Nevin to inject energy into the Matildas side.

Steph Catley, Caitlin Foord and Kyah Simon came out of the game for the young trio.

The Australians were able to create more chances with the fresh legs, but the Philippines' defence continued to prove hard to crack.

Numerous chances were saved, or rushed, as the organised defence continued to wreak havoc.

In the end, Mary Fowler capitalised on a bouncing ball on the edge of the box, to rocket a fourth goal into the back of the net, past the defence and the keeper from a comfortable distance.

The passage of play had relied heavily on Fowler, Vine and Nevin, in an exciting glimpse of the Matildas' future.

In the end, 4-0 was a reflection of the Matildas' strength, Had the Philippines defence not been as strong or organised, it could have been 8-0, but they kept themselves in it for a long period of the match.

After the game, Gustavsson was thrilled by his side's performance.

"We knew this was going to be a very difficult game from the opening game, and I have to give a lot of credit to the Philippines, I think they made it very difficult for us," he explained.

"I think we were able to stay focussed and not get frustrated. What can happen in a game like this is when you create that many chances that we did in the first half, and the stats say that we should have been up three to four-nil, and you don't get those goals, you can tend to sometimes lose your head and get frustrated.

"We talked about that at half time, and said to stay focussed on what we're doing, keep doing it, just doing it faster than in the first half, and the players have come in with a conviction and confidence in the second half to do that, and when the first goal comes, so will the second and the third, and so it did."

Gustavsson was right, that once the dam was broken, more goals flowed. He was also right that the set piece has been effective for the Australians in the first two matches of the tournament.

"I'm really happy about how some of the things on the training ground in the pre-camp in Dubai have paid off in both these games.

"Again, we scored two corner goals. We're deadly on corners, we're really really good on corners and all that work that the players and the staff have done - I'm really happy with it.

The Matildas now have some respite, and have sealed a spot in the next round. A draw against Thailand in their next match will seal top of the group, and Gustavsson talked about the importance of that match in the Matildas achieving their goals for the tournament.

"We had two main targets, two main goals for the group stage - one was to win the group, and two was to get out of the group with as many players as possible available and peaking physically and mentally going into the playoffs.

"Now we have secured a spot in the playoffs, which is good. We have almost secured the first spot, a tie in the last game would be securing the first spot, and we're going to do that in a way where we make sure we have as many players as possible.

"The sport science department, and our SSSM (Sport Science and Sports Medicine) team will see which players need playing time to peak in the playoffs, and who we need to protect.

"Today we protected a couple of players who had minor things, so we didn't want to risk them."