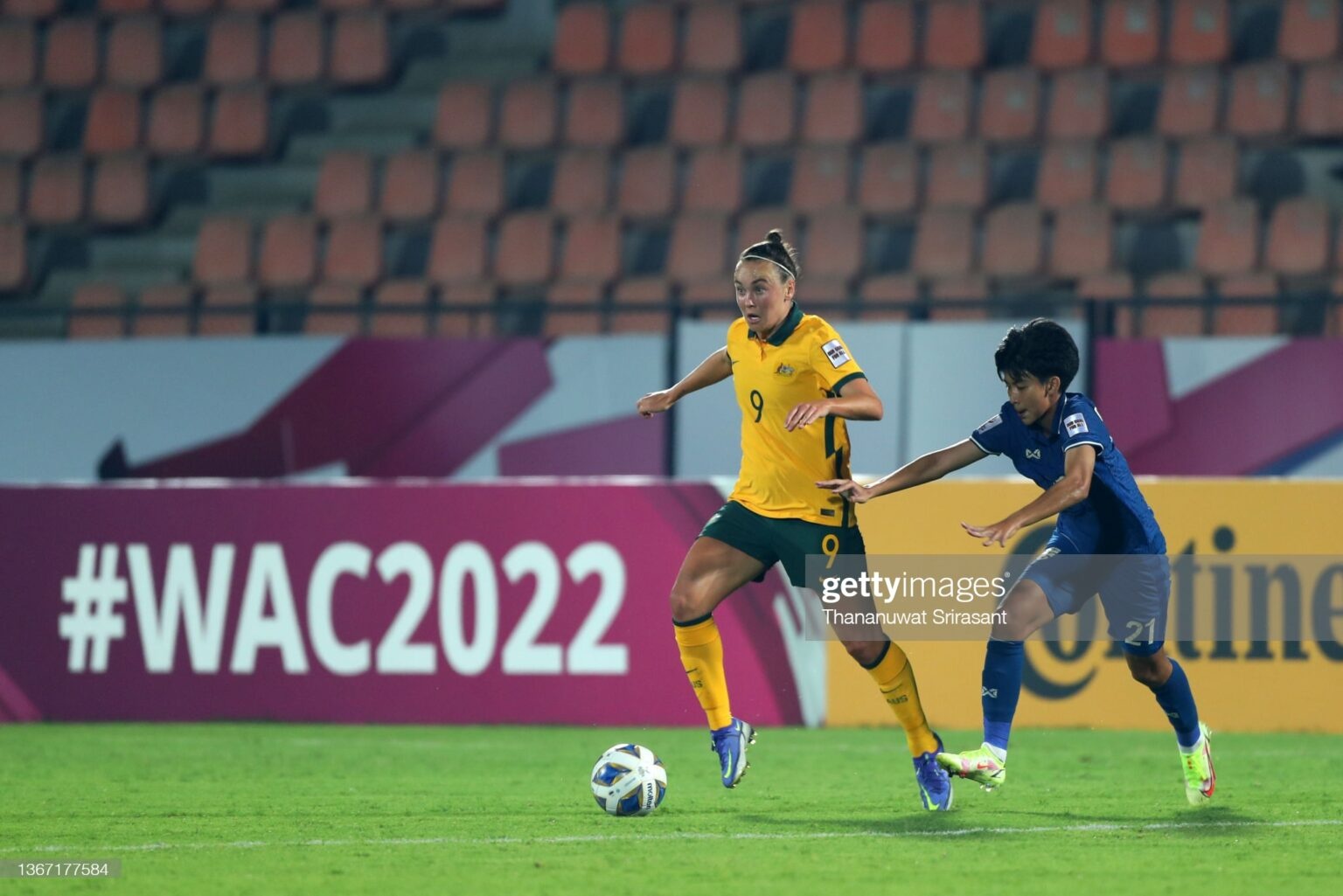 The Matildas were challenged by Thailand in their final group stage match, but prevailed 2-1 to top the group leading into the knockout stages.

The Matildas were challenged by Thailand in their final group stage match, but prevailed 2-1 to top the group leading into the knockout stages.

The Matildas were faced with a much tougher challenge in the final match of the group stage, but came away from the game with a 2-1 win to top the group as they progress.

Having already secured a spot in the next round, and virtually assured on the top spot in the group (ahead on goal difference), the Matildas went into the matchup against Thailand with a different looking starting side.

Tameka Yallop was out of the match after testing positive for Covid-19 the day before the match. Yallop wasn't the only key player missing from the starting XI, as coach Tony Gustavsson took the opportunity to rest many of his key players.

Only Steph Catley and Emily van Egmond backed up from the previous match to start again.

The significant changes showed, as the Matildas' play was far more stunted early and they were missing the trademark ball movement that has made them so dangerous this tournament.

It was just on half an hour in that Remy Siemsen was able to square the ball up to the edge of the penalty area, and Emily van Egmond took full advantage to open the scoring.

As the first half wore on, the class of the Australians started to show, and more chances were created. Holly McNamara and Kyra Cooney-Cross were dangerous as they started to show more comfort with the level, but were unable to produce a second goal for the half.

The second half began with the Matildas threatening, but it wasn't enough to find a score, so just after the hour mark, Gustavsson made a battery of substitutions. Sam Kerr and Mary Fowler entered the field, while Siemsen and van Egmond were given a rest, their job done for the day.

The Matildas continued to pepper the Thai goal, trying to find another goal to push out the lead. It seemed they would be thwarted, until Kyah Simon crossed and the ball was fumbled by the Thai keeper.

As the ball bounced around, Sam Kerr stepped up and tapped it into the back of the net, giving her a goal in each match of the tournament so far.

In the dying moments of the match, Thailand had a corner and another attacking opportunity. Keeper Lydia Williams punched the corner clear, but only as far as Thai star Panyosak, who lobbed it back into the net, as the Matildas conceded a goal for the first time in the tournament.

It was the final action of the match, as the referee blew the final whistle on the restart, in a frustrating moment for the Matildas.

After the game, Gustavsson said he took heart from the Matildas' reaction to conceding a goal.

"I'm happy [with] how upset the team were after the game," Gustavsson explained.

"They were upset about the goal we conceded in overtime. We put in clean sheets in the group stage, and we've done a phenomenal job defensively when we lose the ball, we've worked really really hard.

Gustavsson reiterated that the group stages had been a success, as the Matildas had achieved their two goals.

"One was to win the group, and the second was to get out of the group with as many players as possible available for the playoffs, but also fresh and peaking in form, and the fact that we have had all 23 players on the park during the group stage, it means that we're signalling to everyone that we need everyone in the tournament."

He was also impressed with the application his team has shown throughout the group stages, always bringing the same style of play.

"I'm also happy from a football perspective because we've been true to who we are, no matter who is on the park.

"We play the same way, everyone sees the same picture and we have the aggressive mindset, we attack with the ball and create a lot of chances. We had 24 shots against, and we could have scored a couple more.

"I'm also happy that we play the same way, no matter who is on the park."

The Matildas next match will be against South Korea on Sunday evening.