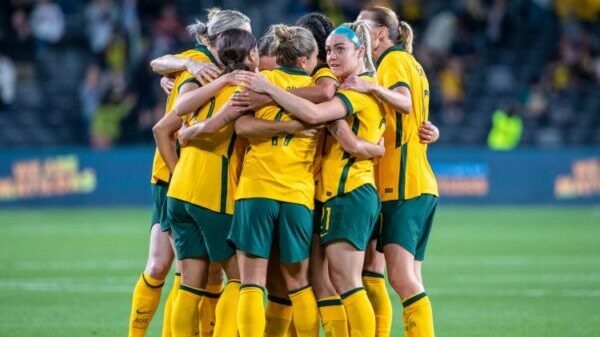 Australia head coach Tony Gustavsson has named his squad for the pre-Asia Cup training squad including some of the A-League Women's brightest stars.

Australia head coach Tony Gustavsson has named his squad for the pre-Asia Cup training squad including some of the A-League Women's brightest stars.

Australia head coach Tony Gustavsson has named a travelling squad of 24 players who will depart for the Matildas pre-Asia Cup training camp in the United Arab Emirates.

The group is made up of 21 players who have received final selection for the tournament, with four of the Liberty A-League Women's brightest stars of 2021/22 included for training which will commence on Monday.

The Melbourne City pair, Winonah Heatley and Holly McNamara are joined by Sydney FC's Cortnee Vine and Karly Roestbakken of Canberra United, with two of these players eventually being added to the final squad to make up Gustavsson's 23 players for the tournament which kicks off for Australia on January 21 when they face Indonesia in Mumbai.

Sam Kerr will captain a squad that contains 36-year-old defender Aivi Luik who had announced her retirement from international football back in August.

Charli Grant will be aiming to take part in her first major tournament after being a non-playing member at the Olympic Games with Remy Siemsen and Clare Wheeler, who made telling contributions in friendly matches towards the end of 2021 also named.

However, the squad contains only four players listed as midfielders - Kyra Cooney Cross, Emily van Egmond, Clare Wheeler, and Tameka Yallop which suggests that teenage star Mary Fowler, who Gustavsson has praised in recent press conferences for her ability to perform to a high level in several different positions, may be asked to play a little bit deeper.

The squad, all of whom have played W-League/A-League Women football during their careers is highly experienced overall. The average age (26.6) of the 21 players with guaranteed selection is older than in Australia's past seven World Cup campaigns, with the average number of caps held among this group, 59, standing higher than in any of the Matildas's previous Asia Cup campaigns.

Revealing the squad at a media conference earlier today, the Matildas head coach said: “We considered a lot of factors and reflected on the experience of the Tokyo Olympics in assembling this roster.

"It was important that, with the initial 21 players selected, we found the balance between players that have been the backbone of the national team for the past decade and providing experience to a new group of players with the World Cup next year in mind.

"Having the right mix of skills to win matches is paired with the right experience on the training park and in the dressing room. Over the past six months, we have worked to examine the talent pool extensively and we think we have found that balance with this squad.”

Gustavsson also explained the thinking behind taking four additional players to the training camp before whittling his squad down to the final 23.

"With additional time before we arrive in India, we wanted to ensure players have every single moment available to them to make their case to be a part of the Asian Cup.”

Australia's Asia Cup campaign opens on January 21 against Indonesia before they go on to face the Philippines on January 24 and complete their Group B schedule against Thailand on January 27 - all the Matildas' group games are taking place in Mumbai.