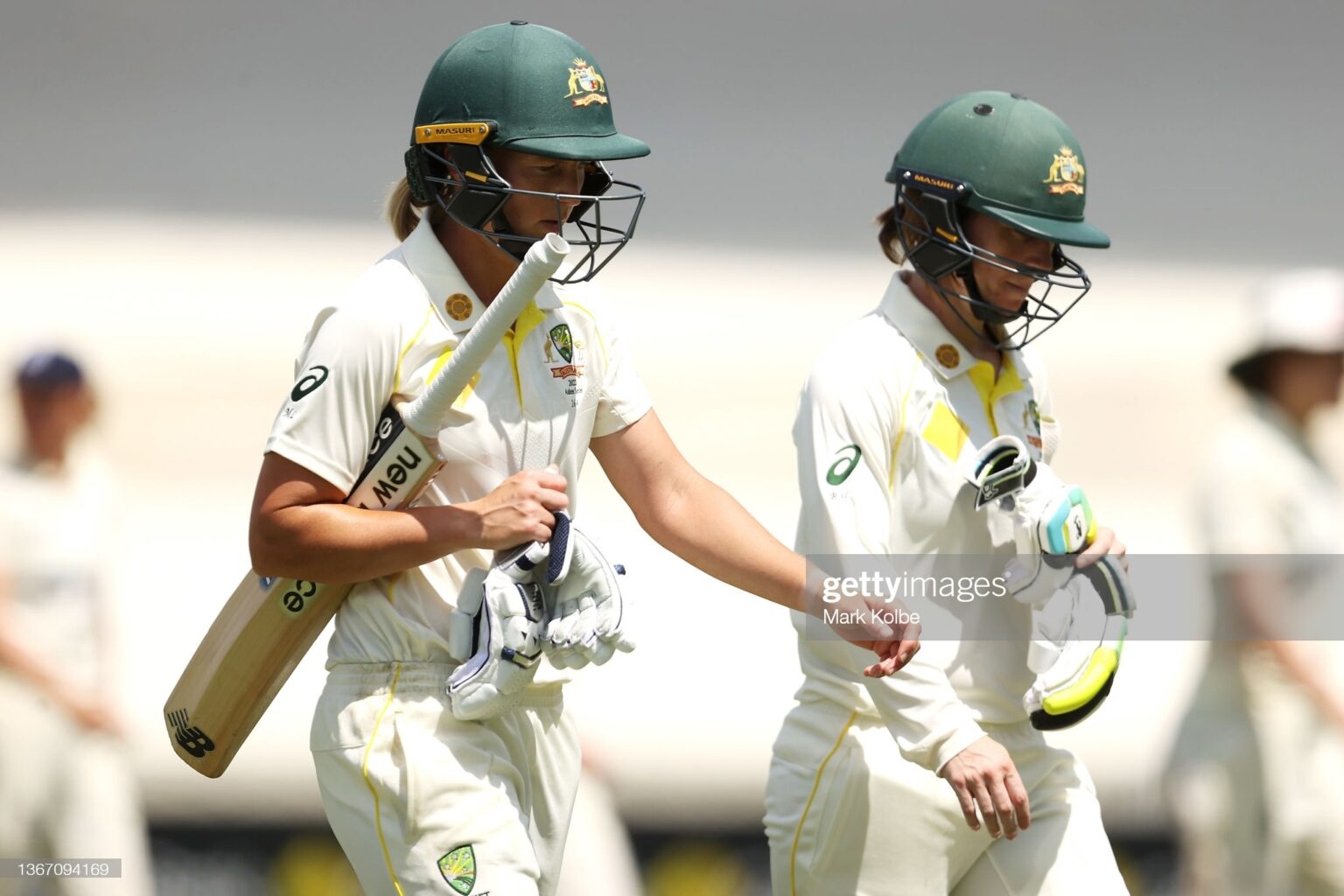 Manuka Oval puts on a show as Australia take the advantage

A late wicket made it an interesting end to Day One of the Women's Ashes Test, though the day belonged to Australia who cruised past 300 at Manuka Oval.

Manuka Oval puts on a show as Australia take the advantage

A late wicket made it an interesting end to Day One of the Women's Ashes Test, though the day belonged to Australia who cruised past 300 at Manuka Oval.

Manuka Oval put on a spectacular Day One of the Women's Ashes Test as Australia battled its way into a winning position with a big score. While it wasn’t perfection from the Australians, the team fought its way through the day setting up a possible Day Two declaration with some severe Canberra weather on the forecast for the next few days.

Australia finished the day with a score of 7/327 with Australian captain Meg Lanning top scoring with 93, along with 86 from Rachael Haynes.

England won the toss on a warm Canberra morning and decided to have a bowl with almost no cloud cover overhead. It was an odd choice although understandable with England wanting to get as much out of the pitch as early as it could with Australia having such a strong batting lineup.

England did manage to strike early with Katherine Brunt and Anya Shrubsole swinging the ball all over the place both in and away from the Australian batters. It didn’t take long for wickets to fall; first it was Alyssa Healy who edged behind off Brunt before only three balls later, the brave Beth Mooney (who is playing with a broken jaw) also edged behind, from the bowling of Shrubsole this time.

Australia was in a very precarious position when Ellyse Perry walked in with the score reading 2/4. But with Perry averaging over 85 in Test cricket before today, it’s fair to say Australia and the Australian fans weren’t all that worried.

After the days play Rachael Haynes spoke on the early wickets that she saw fall.

"I wasn't too stressed, I just think we played at a few deliveries early that we didn't need to," she said.

"Maybe there were some nerves but Meg [Lanning] and I spoke about leaving the ball and letting the bowlers bowl to us. The strong partnership helped set up the rest of the day."

Rachael Haynes then went on to speak about the fact that her career could be coming to an end and this will likely be her last Ashes Test.

"That's probably fair [that] this will likely be my last Ashes Test, so I just want to enjoy it for what it is. It's a really special occasion not just for me but for the whole group, we want to focus on another good days cricket tomorrow", she said.

Perry came out as her assured self even after a week of talk about her being dropped from the T20 side. She batted alongside Haynes, finding the boundary while rotating the strike when required, however, it wasn’t all easy with the pace bowlers continuing to swing the ball a long way.

The swing eventually became too much, with Perry giving the English wicketkeeper Amy Jones her third catch of the morning as she edged a pull shot from the bowling of Nat Sciver, departing for only 18 runs. But then entered England’s biggest problem of the day in Meg Lanning; playing against this Australian side is like coming up against the Avengers in a Marvel movie, the stars just keep coming to smash you into the ground.

And smash England into the ground Meg Lanning did as she combined with Rachael Haynes to take all the life out of the English bowling attack. Whether it be the pace or spin, Haynes and Lanning pushed their way through lunch with ease getting the score to 3/79 from the 28 overs before the long break. The hard work continued with Haynes bringing up her 50 from 107 balls, finding the boundary eight times.

The partnership continued well after drinks with both batters often going through the covers but also rocking back hard on the back foot to pull to the boundary with ease. It didn’t take long for Lanning to bring up her second Test 50, this one coming from 97 balls with seven boundaries.

There was a review soon after the 50 was brought up but it was turned down. In reality, it wasn’t all that close and probably didn’t warrant the review at all from England.

The pair continued through the second session getting all the way through tea putting on 120 runs through the session that saw 32 overs bowled. The over rate was once again slightly behind from England in a Test that is meant to see 100 overs per day. While 100 overs is a lot it should be comfortably completed with the women having shorter run-ups compared to the men with a lot more spin also being bowled.

Both women looked towards their centuries after tea but that ended up being their downfall. First, it was Meg Lanning to go for 93 edging one to a diving first slip for a great catch to the captain Heather Knight. Meg Lanning, for all the good she has done for the game in the white-ball formats has never hit a Test century.

Only three balls later it was Rachel Haynes edging behind to a delivery that grabbed some extra bounce, giving Amy Jones her fourth catch and giving Katherine Brunt another wicket for the day.

"I wasn't worried about [reaching 100,] it was a lack of concentration and I felt like it opened the door for England," she said.

The wickets brought out the aggressive pair of Tahlia McGrath and Ash Gardner who put the fight back to England, finding the boundary often and with ease. The partnership cruised along bringing up 50 from only 87 balls as Australia passed 250 and looked towards 300.

Gardner in particular was aggressive, bringing her 50 up just after the second new ball was taken. It only took her 63 balls with seven boundaries and one huge six coming off of her bat to reach the milestone.

Interestingly England opted to wait until the 84thover until it took the new ball, perhaps due to the over rate, and perhaps a thought it was 'spin to win'. It was certainly 'pace to win' though with the ball swinging all over the place towards the end of play with the new rock.

Rachael Haynes spoke about the counter attacking partnership from McGrath and Gardner.

"They batted with good intent and it swung the momentum back our way, it was a positive way to finish the day", she said.

There were three DRS decisions to be made within only a couple of overs as the front pads of both batters were often struck in front of the stumps. On some occasions, it was the swing and some it was the bounce that saved the Aussies.

Eventually, though it was too much for Gardner who was trapped in front for 56. She still went upstairs, with McGrath thinking it was swinging down the legside, but it didn’t quite swing far enough with ball tracking showing it to be hitting the wickets on DRS.

Tahlia McGrath and Annabel Sutherland shut up shop slightly towards the end of the day at Manuka Oval as they looked to get through the night with the goal of a declaration at some point tomorrow. McGrath managed to bring up her fifty as well from 83 balls to continue the amazing form she had in the white ball games earlier in the tour. A wicket came from the final ball of the day as McGrath edged behind to give Jones her fifth catch, it was a clear lack of concentration that McGrath will be kicking herself over.

Rachel Haynes summed up the days cricket after play.

"It would've been nice to go into the sheds one less wicket down, but overall it was a good day of Test cricket from us". she said.

With the ball, it was Katherine Brunt who showed her skills once again on what will likely be her final Ashes tour in this country. Nat Sciver also chipped in well with figures of 3/41 from her 16 overs. The spin of Sophie Ecclestone and Charlie Dean didn’t quite have the effect that England wanted with combined figures of 0/119 from 32 overs.

Rachel Haynes commented on the bowlers and the pitch after play.

"I felt like there was enough in the pitch all day, if the bowlers got their length right it was tough. There weren't too many drives down the ground today and it was a tough wicket when the bowlers got it right," she said.

"Their spin attack bowled very quick today, hopefully, ours take the pace off the ball a little bit more."

The cricket continues tomorrow with Australia taking on England at Manuka Oval with the first ball scheduled for 10.10am. Australia will look to bat a little bit longer before a declaration comes while England will want three quick wickets to arrest the momentum.