Discover Bridgerton Season 2. A new family will join the ton, with secret romances and scandals being uncovered. 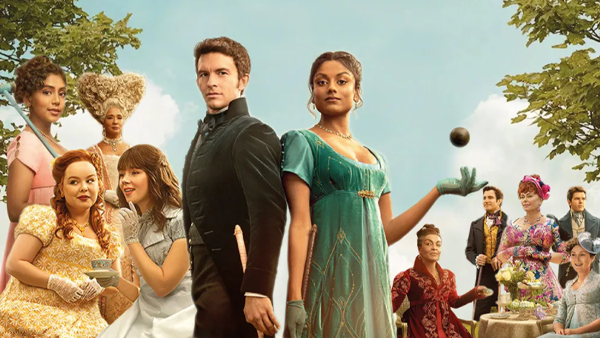 Ready yourself for the new social season. WithBridgertonSeason Two, expect the comeback of dazzling gowns, tea sessions (being gossip and the drink) and the build up of a secret romance. With the power to make you long for a bejewelled frock or be chased after by a prince, how could one object?

Season One followed Daphne and her marriage to Duke, Simon.BridgertonSeason Two focuses on her brother, Anthony's quest for a wife. It is refreshing to see how he sheds his party boy persona which he wore in the first season.

Viewers are introduced to the Sharma family, composed of mother, Mary along with her two daughters Kate and Edwina, who have come from Bombay. The purpose of arriving in London is to find youngest, Edwina a husband. The Sharma's backstory is revealed to us, making them the talk of the ton.

Anthony (Jonathan Bailey) first sets his eyes on Kate (Simone Ashley) when they both are riding horses in a forest. She rushes past him and he follows after her. From the first moment they meet, there is an undeniable connection.

At Lady Danbury's ball, the family is informed of potential suitors for the youngest Sharma. However, much to Kate's surprise, Anthony is here too.

Edwina (Charithra Chandran) is named this season's 'diamond', which results in a long line of suitors queuing up to meet her.

Kate is very protective of her little sister and the two of them share a loving bond.

Things get rather messy with Anthony pursuing the agreeable, innocent Edwina while having much more in common with the strong and competitive Kate.

Bailey and Ashley's characters are both the eldest and have had the responsibility of looking after their siblings, with little time to consider what they want for themselves. Both their fathers died as well, perhaps making them feel they have more of a duty to the family.

Kate and Anthony battle with their intense emotions, swearing to end what they have for the good of Edwina. Although this never lasts long. The pair keep gravitating to one another. Daphne senses the chemistry from the start, even walking into a room where she finds the two incredibly close.

All the while, poor Edwina has no clue. It is only on her wedding day when Anthony's eyes continue drifting to Kate as opposed to his yet-to-be wife, that she has pieced it all together.

Edwina is devastated and it takes her some time to forgive her sister. Kate is remorseful, wishing her feelings for Anthony would fade. It is upsetting to see a rift between the usually close sisters.

Eloise experiences a forbidden romance as she works to unveil the identity of scandalous writer, Lady Whistledown - not at all aware that the woman behind the quill is someone close to her.

Meanwhile, Jack comes in to deal with the Featherington Estate.

Although the series (created by Shonda Rhimes, based on the books by Julia Quinn) is set in the Regency Era, it has a modern touch to it. Another likeable aspect of the series is it's multicultural cast.

The series may not be completely historically accurate but the storyline has captured hearts, attracting a strong fanbase.

The situation between the Sharma sisters and Anthony could have been avoided if from the start he had simply accepted his feelings for Kate, instead of courting Edwina when his heart was not in it.

It felt like the characters were making it more complicated than it had to be. However, this plot line does make for a great deal of tension.

Expect more excitement with a third and fourth season confirmed, all part of the plan for at least eight seasons - to cover the number of Bridgerton children.

After finishingBridgertonSeason Two, you'll be wanting to play a game of Pall-mall and will maybe even adopt the 1800s way of speech.