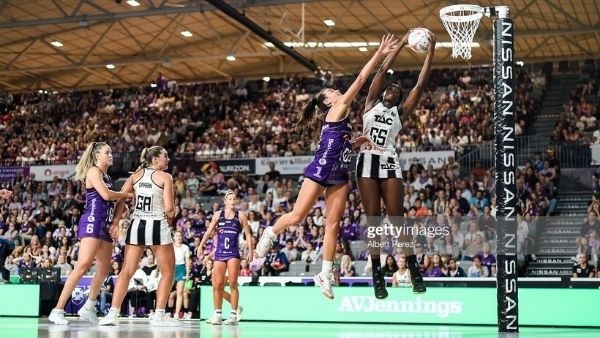 Magpies swoop on second win of the season against Firebirds

The Collingwood Magpies caused a major upset this afternoon at Nissan Arena with an eight-goal win over the Queensland Firebirds.

Magpies swoop on second win of the season against Firebirds

The Collingwood Magpies caused a major upset this afternoon at Nissan Arena with an eight-goal win over the Queensland Firebirds.

The Collingwood Magpies have caused an upset at Nissan Arena with an eight-point win over the Queensland Firebirds 67-59,to keep their season alive.

The Magpies took control of the game early, leading at every break but once the Firebirds starting coming in the third quarter, the Magpies took the pressure to another level.

"We needed to nullify Gretel. She's such a playmaker down that attack end and her connection with Wallam [Donnell Wallam] and what Wallam has done in the first first five rounds has been outstanding," Nicole Richardson said post match.

"We needed to try to work on that and you just can't give Gretel any free flow out on court and you've got to body up on her, you've gotta give her a presence because once you get to momentum, you know, she's really hard to stop.

"Then we needed to have an impact on Rav (Kim Ravaillion).  Rav and Gretel were the two that we needed to try to target, so I think our girls did a really good job there and it's not just those down back.

"Within that game plan, our wing attack and goal attack had a really big role to play in that you know, our aim was trying to suffocate them across the transverse line and I think our girls did a good job in executing that and predominantly, they really did that for 60 minutes.

One player who helped was Zoe Davies, in only her second game of Suncorp Super Netball. Davis took it up to one of the best goal attacks in the world, making Richardson proud of the effort.

"I think Zoe [Davies] played a role for us, there's not a defender in the league or around the world that's going to be able to contain someone like Gretel.

"So Zoe played a really good role for us today. We needed to put some physical presence on Gretel and you know, just not give her any easy balls or access to the circle and I think that Zoe did a good job on that.

"She just brings that intent to our game, adds a little bit more physicality and just finds ways to win the ball herself as well. So I thought I thought she did a really good job on you know, probably the world's best goal attack and in only Zoe's second game."

Molly Jovic returned to the side this week after missing the game against the Giants due to Covid-19 and had a massive impact and earning herself player of the match.

"Yeah, Molly worked hard for us defensively today and in attack and you know, credit to her for coming off  COVID and running a full game out in the centre, that's impressive.

"Molly worked hard for us defensively today and in attack and you know, credit to her for coming off  COVID and running a full game out in the centre that's impressive.

"I think it was the fact that I said to after the game there were times where I thought she started to struggle and when went to give her some fresh legs in there but you know she was able to then kick in and find another gear. so I'm sure she'll be pretty tired after this game but to her credit she fought hard."

This round is ANZAC Round, commemorating all the servicemen and women who have fought for Australia. One of the themes coming from ANZAC Day is mateship and Richardson was proud that the element of mateship was out on court for the Magpies today.

"It was amazing and that's something we I like it's the first time that we've had the privilege to connect ourselves with ANZAC Day and we really drew on that today, so we drew on that ANZAC Spirit. So, being brave, being courageous, being skilled and also that mateship and I thought the girls did that to a tee today, so really exciting."

"It wasn't just one person that stood up, we had players across the whole court put their hand up and stand up in any given moment and that's what it's about. It was great to see that consistency across four quarters, which has been missing in the first five rounds."

Queensland Firebirds midcourter Jemma Mi Mi notched up 50 games today, after sitting on 49 games for the past two weeks, she was able to reach the milestone this afternoon.

“I feel very lucky to get my 50th game and them all being with the Birdies is something pretty special and something I will remember for a long time,” Mi Mi said.

“[It was] disappointing we didn’t get the win, you want to go out and win every game. But the Magpies definitely showed up today and they just came out and fought really hard.

“You just want to do your job when you get out on court and whether it is 49 games or 50 games it is still just a game of netball at the end of the day.

“But it is your job and you just want to do your fans and your family proud, so it is nice to finally get that 50th.”

Looking back on her career to date, her highlight was came when she stepped out on court for the first time in the purple dress back in 2017.

“Probably my debut back in 2017, I think that was pretty special,” she recalled.

“Then probably the game after that we played Magpies actually and I started for the first time and that was against Ash Brazil, I remember – and Ash was actually really lovely to me on the court.

“It is kind of surreal because it is like a full circle moment.”

The Queensland Firebirds will looking to bounce back when they take on the NSW Swifts at Nissan Arena on Saturday, while the Magpies will take on cross town rivals in the Melbourne Vixens in the Melbourne Derby on Sunday.