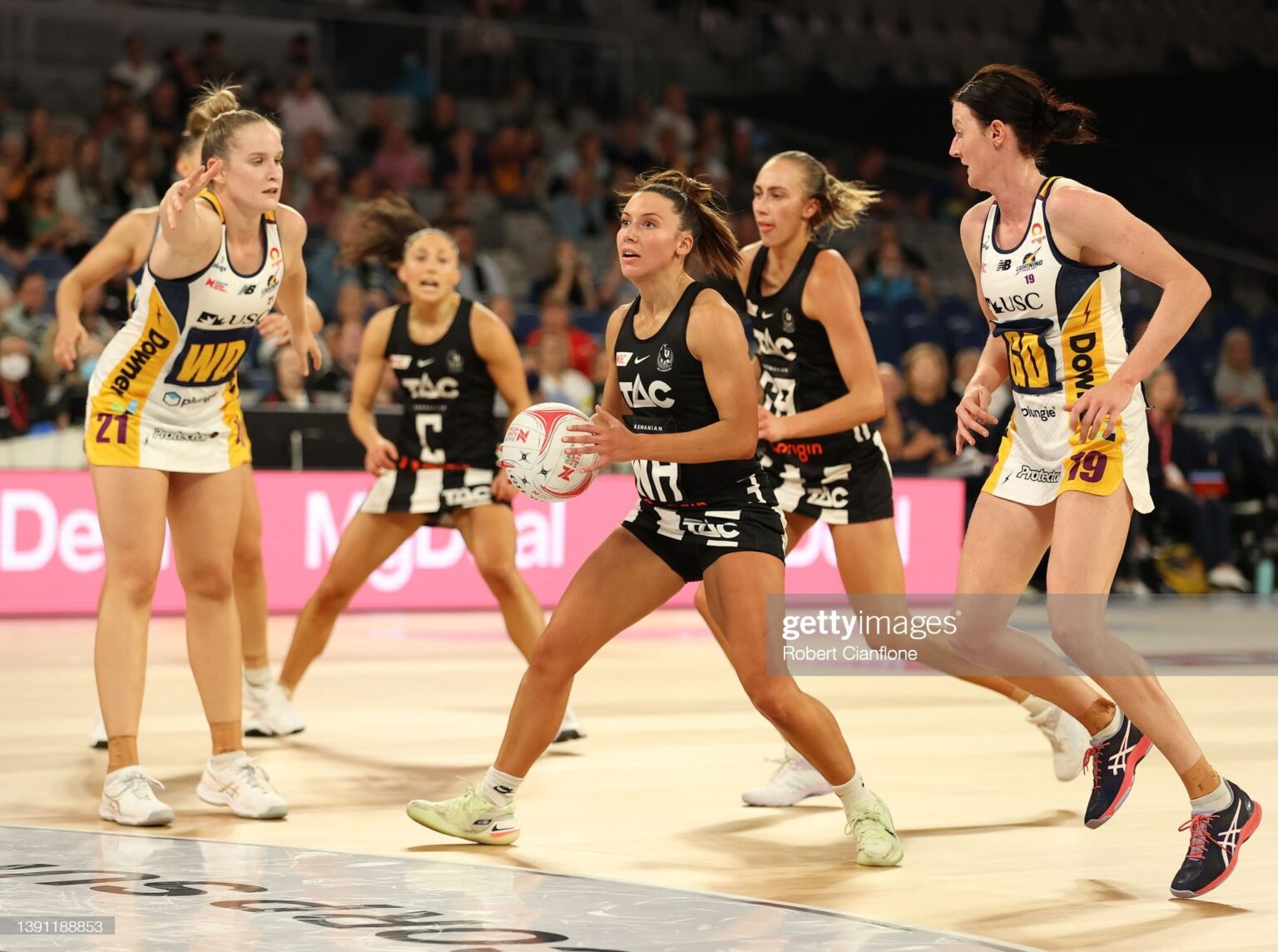 Magpies seize their first win of 2022 over Lightning

The Collingwood Magpies are on the board, despite losing two goal attacks to COVID-19, after a big win over the Sunshine Coast Lightning.

Magpies seize their first win of 2022 over Lightning

The Collingwood Magpies are on the board, despite losing two goal attacks to COVID-19, after a big win over the Sunshine Coast Lightning.

Just hours before the game, the Magpies announced that Sophie Garbin and Gabby Sinclair would be out for Round Four and Five. Nyah Allen has stepped in to fill Garbin’s role and Vixens nominated athlete Ruby Barkmeyer for Sinclair.

Allen has been a Collingwood Training Partner for several seasons now, which means she already has a connection with members of the Magpies team. She appeared fairly comfortable on court with Shimona Nelson, making goals early on in the game.

The scores broke after miss from Nelson put the Lightning up by two after five minutes, despite Jodi-Ann Ward’s best efforts. In the quarter, she had two gains and two rebounds to her name.

Allen brought the score to 13-all with four minutes to go, successfully sinking her first Super Shot attempt. In a matter of minutes, the Magpies were up by three, prompting the Lightning to start attempting some Super Shots of their own.

Although Steph Wood and Cara Koenen were unable to make a successful Super Shot, Nyah Allen was still going strong. In the final seconds of the quarter, she made her third, putting the Magpies in the lead 20 - 16.

Less than five minutes into the second quarter and the Lightning called a tactical timeout. Coach Kylee Byrne told the team, “When we step out there, this is gonna take energy just to lift.”

“At the moment, we just look like we’re at the one pace and we’re just going through some motions. Go back to what we know that brings us together and lifts.”

Steph Wood continued, “Eye contact, high fives, everything, we back each other up.”

This pep-talk made an immediate impact, with Laura Scherian making an intercept off the centre pass. After a struggle to get it into the goal circle, Cara Koenen made the score 23-19.

For the second quarter, Jacqui Newton was at goal defence and made her presence known. Throughout the game she created several opportunities for the Magpies to capitalise off.

With five minutes left, Coach Nicole Richardson took the time to give her team a breather. After telling her team they were “doing a really good job,” they spoke tactics for the final five.

During this time the Lightning made several positional changes, bringing Wood back on court in the process.

These changes seemed to make little difference, with the Magpies powering on ahead. By halftime, their lead was now 15 points – much to the crowd’s delight.

It was clear that the Lightning had to pick it up in the second half if they wanted to stay in the game. An early turnover got them started, which seemed to give the players a boost in confidence. Unfortunately, turnovers were few and far between with the Lightning’s time running out.

In the Power Five, it was time for the Lightning attacking end to start utilising their long-range abilities. With the score now 53 - 36, Byrne called a timeout to attempt to regroup.

Batcheldor replaced Koenen as goal shooter, attempting a Super Shot with no success. Wood, however, made two successfully, making it a 17 all quarter.

After the break, the Magpies kept their momentum, continuing to dominate across the court.

Kadie-Ann Dehaney stepped on court for the second time in the game, changing up the Lightning’s defensive end. The game was Dehaney’s 50th in the national league.

In the final five, the Lightning were still fourteen behind. If there was a time they need the Super Shots to sink, it was now. Once again Batcheldor came out, and made an immediate difference, putting two points on the board. Three more attempts and six points later, the score was within ten.

A minute left and it was Wood’s turn for a Super Shot. The Magpies were weathering the storm, staying in control despite the decreasing margin. With a final goal on the buzzer, it was a ten-point margin, 74 - 64.

Wing attack Kelsey Browne was named player of the match, with 29 goal assists to her name. Post-match Browne commented on the win, sharing "I think after last week everyone was really gritting their teeth trying to get that win and it just feels so surreal today that we're got it."

"Unfortunately we don't have two of our players here today, but that one's for them."