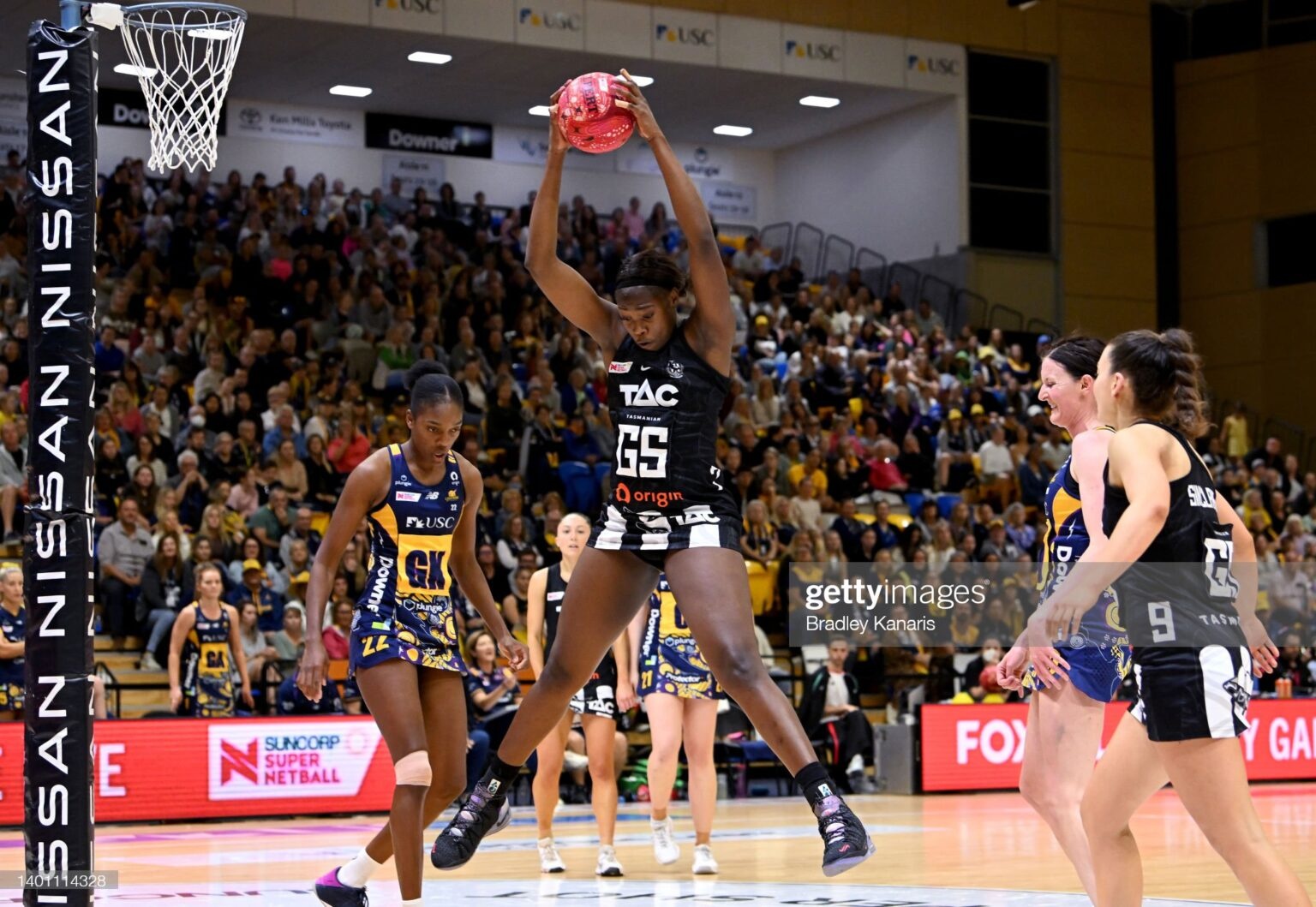 The Collingwood Magpies have beaten the Sunshine Coast Lightning to take control of a finals spot with one week to go in Super Netball 2022.

The Collingwood Magpies have beaten the Sunshine Coast Lightning to take control of a finals spot with one week to go in Super Netball 2022.

The Collingwood Magpies have beaten the Sunshine Coast Lightning to end the penultimate round of Suncorp Super Netball, and in doing so, have vaulted themselves into the top four for the first time this season, with one week to go.

The teams traded goals early, as neither the Magpies could gain ascendancy early. Steph Wood and Cara Koenen were in good form for the Lightning, while Shimona Nelson was holding court at the other end, dominating for the Magpies.

Ten minutes into the match, Nicole Richardson went to her bench, swapping Gabby Sinclair on for Sophie Garbin. Sinclair has been strong over the past few weeks, and the coach explained after the match that she was keen to get her on, but didn't want to disrupt the flow of her team.

"We started with Soph, we’ve started like that all year, so just changing our starting lineup when we haven’t done it all year," Richardson said.

"I wasn’t sure what that was going to do the mindset of both Gabby and Sophie, so I basically stayed with what we started with and obviously injected Gabby quite early into the game this week. Sophie’s still doing some really good things out on court for us, but I felt like we needed to inject Gabby."

The move started to pay dividends in the second quarter, as Sinclair sunk six of her seven shots, while also working as a foil for Shimona Nelson. Nelson had 26 goals to her name at half time, as the Magpies edged in front by a goal.

Coming out of half time, the Lightning had a new-found strength and speed, as they fought back to get the game on their terms. Lightning coach Kylee Byrne explained after the match what they had discussed to spur that change.

"Our half time chat was good, we identified what we were doing well, and maybe what they would come out with," Byrne said.

"Collingwood came out and were really physical in that first half and we could tell that was a certain plan of theirs, particularly for our shooters, and just to get in their face and definitely knock them around a bit.

"I was a bit concerned that would come out in the second half, and while that wasn’t the reason, I think there was an element of that, they were getting caught and they were able to stay with us when we got the ball, so we will need to chat to the umpires about that."

The Lightning started to move more in the circle, trying to disrupt the Magpies' defence, which started the third quarter strongly. Cara Koenen was shifted from goal shooter to goal attack, while Steph Wood swapped to play her partner.

"We were trying to get Cara more space, I thought Geva [Mentor] was keeping her close to the baseline well, so it was just to get Cara to move, and when she is on the move, her entry into the circle is quite beautiful to watch.

"There were some times where we could get it over and up and get it into her at the post, but that was more about getting some space and also defensively, Cara has got a really good defensive game."

Mentor and defensive partner Jodi-Ann Ward were putting on a show defensively, as they finished with 15 gains, six intercepts and four rebounds between them. Richardson had nothing but praise for the duo after the game.

"That’s a couple of weeks in a row where they’ve been outstanding for us in terms of winning ball.

"We probably need to find ways to be a bit more creative out the front to win ball a bit earlier and not rely on those two in the circle but very pleasing with the combination between those two and what they’ve been able to produce. They’ve got better as the season has gone on."

As the clock turned for the final quarter, the Magpies put their foot down, knowing that finals was on the line, and produced a nearly-flawless quarter of netball. As a team they had one missed shot that rolled out of bounds, as the only turnover for the quarter.

The Magpies pulled away from the Lightning, who fought hard, but were unable to find the same attacking flow, as they grew increasingly desperate. The Magpies defence stood tall, especially in the final five minutes when the Lightning threw the kitchen sink at them, in the hope of finding a win.

"I thought our defenders did really well in the last quarter," Richardson said after the match. "That last time out was called just to address what we were going to do with that two point shot and it was a little bit defensively, but also what we could do from an attacking perspective.

"What we tried to look at, so what we tried was we tried to starve possession of the ball, so instead of us scoring so quickly and then giving the ball back in their hands, it was finding a balance between making sure we were still ticking the scoreboard over but also taking some time off the clock to starve them of possession.

"From an attacking perspective, I thought we did that well, and we just sat a little bit higher in the ring, to really confuse that two point space, and that brings in the hands of Molly [Jovic] and [Ash] Braz on the outside of the circle as well."

The Magpies would go on to run out six goal winners, dominating the final period of the match to vault into the top four on the ladder.

"It was great to get the win. Lightning came hard at us and we were able to weather the storm that they presented and get ourselves into a good position where the game probably should not have been as tight," Richardson said.

"We lost our way at the back end of the third quarter, we got a little bit too long in our attack from gaining ball so we tidied that up, and super impressed with the team in the last quarter only giving away one turnover. A real good day out, and we’ve set ourselves up nicely and destiny is in our own hands now."

For the Lightning, it is the story of the season. With five new faces in their squad of ten, there have been plenty of occasions where the Lightning have fought hard, but have been unable to close the deal and win matches.

Coach Kylee Byrne rued another missed chance, in a season of them.

"That’s one point we’re certainly going to have to look at next year, getting those opportunities where we are about three goals down to turn that into a lead and then build on that lead. Getting those runs, and being in those tight situations, and making sure we come out on top," she said.

"I thought our defenders got into great positions to defend Shimona and when you go up against a team where their goal shooter scores 50 plus goals consistently, just getting those little wins are the ones that matter.

"There were probably a few missed opportunities and rebounds or pickups that I would have loved to go our way, and that's the difference between a five goal loss as well. They stood up well but we still need to find opportunities out there."

After the game, Nicole Richardson paid tribute to Ash Brazill, who played both a defensive role, and an attacking role, in helping the Magpies transition their turnovers into goal. The Magpies managed that at 65 per cent efficiency today, a telling indicator of a strong performance.

"Braz is such a strong attacking player for us if we can get some flow through our back end," Richardson said.

"We knew that Lightning play with quite an aggressive wall, which makes it difficult for our front two to get through, so we looked to try and exploit that going to Braz through the back door, and then going over the top of the wall, and I thought that worked quite well for us tonight."

The win means that the Magpies control their own destiny heading into the final round of the season. Win, and they will make it through to the finals of Super Netball in 2022. Lose and they will be relying on other results to go their way.

That's the good news for the Magpies. The bad news? Their final match of the season is against the minor premiers, the Melbourne Vixens.