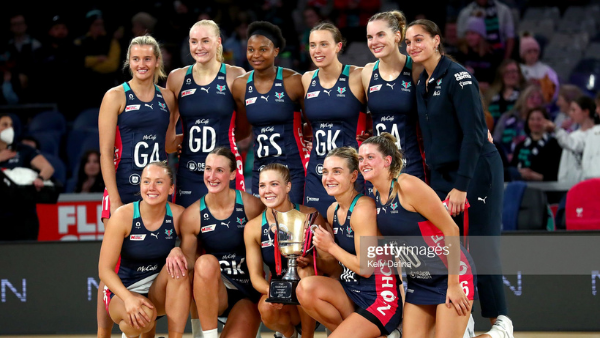 The two sides were fighting for more than just the four points, with the Sargeant-McKinnis cup up for grabs. The Swifts were looking to hold onto the cup, while the Vixens hoped to bring it back to Victoria.

The Melbourne Vixens were quick to open proceedings, with Kiera Austin scoring the first goal of the match, which the Swifts had a quick reply for as Kelly Singleton converted down the other end.

A missed shot from Austin saw the Swifts make the most of the opportunity, with Singleton converting down the other end.

A pick-up from Kate Moloney in wing defence saw the Vixens once again draw the match with a goal from Kumwenda.

Two turnovers in the Vixens' attacking third saw the Swifts extend their margin to four points with nine minutes to play in the first quarter.

An intercept from Sarah Klau gave Singleton the opportunity to convert down the other end, bringing the margin out to five goals and forcing Simone McKinnis into calling a time-out.

The Vixens started strong out of the time-out, being able to capitalise off a Swifts turnover with the margin going back to four goals. Although a footwork call against Kumwenda saw the Swifts gain possession, the Vixens were able to win it back and score through Kumwenda, bringing the margin back to three points.

An intercept from Maddy Turner allowed the Swifts to take the margin back out to five points, which was quickly followed by a strong baseline drive from Singleton on the Swifts centre pass to continue their run.

An intercept from Hannah Mundy helped break the Swifts momentum, with an Austin super shot bringing the margin to five going into the quarter time break.

OVER A THIRD – THE RUN HOME: PREDICTING THE FINAL LADDER

The Vixens made a few changes at the start of the second quarter with Liz Watson going to wing attack, Moloney going into centre and Kate Eddy coming on at wing defence.

A Moloney intercept that led to an offensive contact on Maddy Proud saw the Vixens have the chance to bring the margin back down to five, with the opportunity almost slipping through the Vixens fingers as Paige Hadley got her hands on an intercept. The Vixens were able to win the ball back and Austin converted.

With the Vixens cutting down the Swifts' margin to just two, Swifts coach Briony Akle called a time-out to try and stop the momentum of the Vixens.

The Swifts started strong out of the time-out with a pickup from Turner and Housby converted down the other end.

A pick-up from Eddy allowed the Vixens to break the Swifts next centre pass, and Austin scored down the other end.

Allie Smith came on in wing defence for the Swifts with three minutes to play in the first half, to try and stop the impact of Watson.

A missed shot from Housby gave the Vixens the chance to bring the margin two, but back-to-back goals from Kumwenda brought it back to one. The Vixens were then able to break the Swifts next centre pass with Kumwenda levelling the score for the first time since early in the first quarter.

The Swifts brought Sophie Fawns on at the start of the second half, with Housby moving up into goal attack.

A Jo Weston rebound gave the Vixens the opportunity to bring the margin out to three points, the side's highest lead of the game.

The Swifts were able to bring the margin back to just one with three consecutive goals and started to lift their defensive pressure, with no easy path to post for the Vixens.

A couple of pick-ups by Eddy saw the Vixens move out to a five goal margin, before the Swifts called a time-out to stop the Vixens momentum.

An intercept from Eddy saw the Vixens push out their lead to nine points, as the Swifts brought on Tayla Fraser in wing defence.

Another intercept from Eddy gave the Vixens the chance to take the margin to 11, but they couldn’t capitalise, with the Swifts bringing the margin back to nine through Housby.

An intercept from Emily Mannix saw the Vixens extend their lead to 11 with Kumwenda having no troubles scoring down the other end.

The Swifts brought Singleton into goal shooter while Teigan O’Shannessy came on at goal keeper to try and stop Kumwenda’s impact in the final minutes of the match.

A flurry of super shots from Housby left the adjar open for the Swifts but it wasn’t enough to get over the line with the Vixens up by five points at the final whistle.

McKinnis was pleased with the game from Eddy after she came onto wing defence in that second quarter.

“She got a hand to lots of ball, she hassled, she took intercepts and drove it out, so it was really good to see her out there doing that and Kate Moloney when she went into the middle was super.”

Despite a good win, there is still places for improvement for the ladder leaders after a slow start out of the blocks.

“I think there was lots to be pleased about, but there’s still not just in the goal circle, but still areas we want to get better.

“I thought we were a little sloppy with the hands and dropped balls, those sorts of things. Certainly, some real positives and the way we played our way through to get back into the match and the way we finished it.

"Certainly, we can tidy up with some of the execution stuff.”

While the Vixens reclaimed the Sargeant-McKinnis Cup, for McKinnis the rilvary extends beyond the Cup.

“It is all about the VIC, New South Wales rivalry. I know it’s the Sargeant-McKinnis cup, but it is about VIC v New South Wales, that old traditionally rivalry that we’ve had.

“So, it’s nice, I’d rather have it than not have the cup, but obviously the win is the most important part for us.”