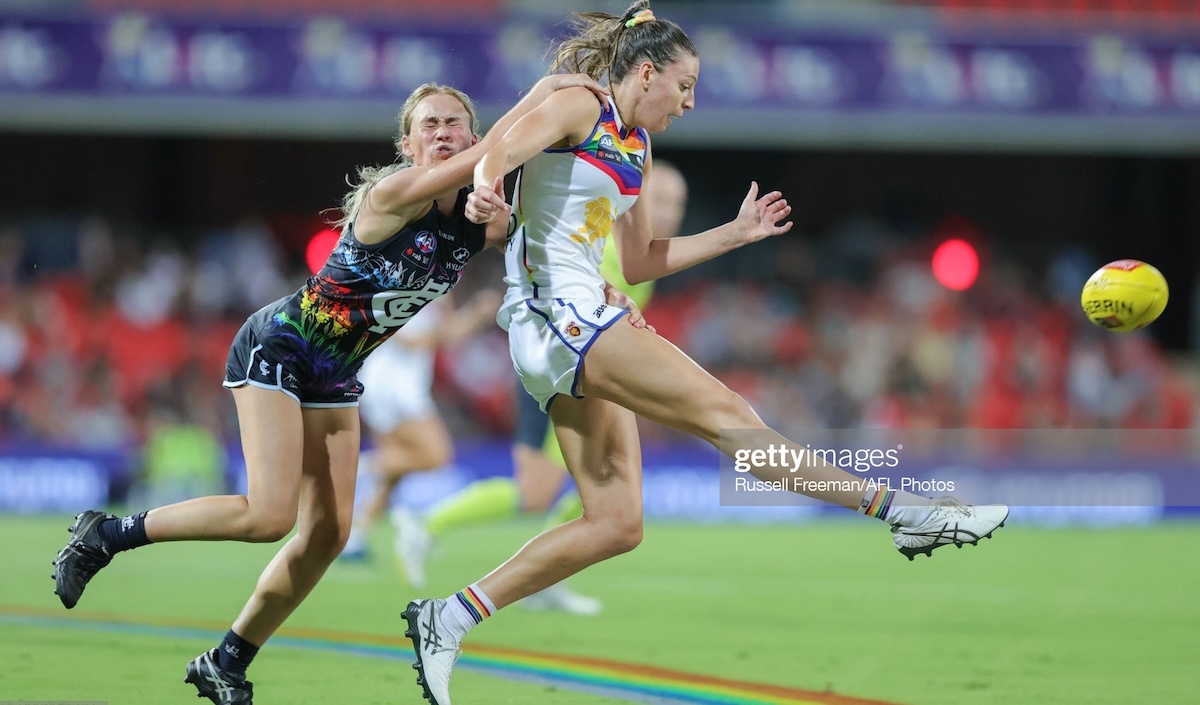 Lacking pressure across the field, the Carlton Blues had a miserable Tuesday night on the Gold Coast, losing to the Brisbane Lions by 35.

Lacking pressure across the field, the Carlton Blues had a miserable Tuesday night on the Gold Coast, losing to the Brisbane Lions by 35.

Lacking pressure and a little composure with the football, the Carlton Blues have had a miserable night on the Gold Coast, losing by 35 to the Brisbane Lions.

To conclude Pride Round, Carlton travelled to take on Brisbane in a clash that was part of the Covid-19 rescheduling ahead of the second round.

While the Lions quickly found form to jumpstart their season, even after Covid swept through the group, it wasn't all happy days in the den. Ruck Taylor Smith went down with a knee injury and they'll all have their fingers crossed it's nothing too serious.

It's been a turbulent start to the reigning premiers' campaign, as they've been caught up in the chaos, with new Health and Safety Protocols chaos seeing them have an extended break between playing in the first and third rounds.

Putting their 30 point loss to the Adelaide Crows in the season opener behind them, the Lions were out hunting a big win on Tuesday night.

There were four debutants across the two teams for this clash: Ruby Svarc and Zimmorlei Farquharson came in for their first matches in the Lions' jumper, while KeeleySherar and Brooke Vickers debuted for the Blues.

The Carlton pair were handed their debuts as Gab Pound and Jess Good missed travelling for the match due to AFL Health and Safety Protocols.

Returning from the birth of her daughter, Sharni Webb was also included in the Lions' line up for her first game in 674 days.

Without stars Kate Lutkins (ACL), Dakota Davidson (foot sprain) and Sophie Conway (Health and Safety Protocols), the Lions would have been forgiven for a slow start. However, they kicked things off nicely with Jesse Wardlaw hitting the scoreboard with a major.

Set up by the run and bounce ofFarquharson, Wardlaw slotted her second goal just a few minutes later. Greta Bodey added another, and the Blues were certainly on the back foot in the first quarter at Metricon Stadium.

It was perfect timing for Carlton when Courtney Jones was awarded a free kick near the behind post. She ran around and snapped the goal right on the siren to put her side just two goals down at the first break.

Whether the goal should have even been possible was questioned by the commentary team and fans alike, as the ball did appear to bounce over the line before Jones was awarded the free kick at the next contest. However, without a review system the goal had to stand.

To open things in the second, a fumble from Tahlia Hickie on half-back was pounced on by Madison Prespakis. A quick handball to Lucy McEvoy had the Blues heading inside 50 to Nicola Stevens, who slotted the goal.

Slick ball movement from the Lions continued to impress, as they executed precisely on transition to hit targets. A mark and goal by Jess Wuetschner was the end of one of these brilliant passages.

Courtney Hodder got her season underway with a lovely goal on the run and it put Brisbane up by 20 points at the main break.

It was a stalemate to start the third quarter, with neither team able to hit the middle of goals. The ball was ping-ponging from one 50 to the other, as both sides had chances to

Brisbane had a chance to score; Hickie rebounded the out of defensive 50 and went straight up the middle to Smith, who picked up the ball and was able to run and bounce, such was the lack of Carlton pressure.

However, Smith rushed her kick inside though and was intercepted by Jess Dal Pos.

Darcy Vescio had their chance to score their first goal for the season with less than a minute left in the term. They missed, hooking to the left for a behind.

FREMANTLE RUN AWAY FROM THE TIGERS ATTACK IN AFLW ROUND 3

It was not a nice start for the Lions in the final term, Smith going down on her right knee. She was taken off in the arms of trainers, unable to weight bear initially, and will be assessed in due course.

A running goal from Emily Bates kicked off the goal-fest in the fourth. Farquharson hit the scoreboard next, in her debut match, and Bodey added her second for good measure.

Jones hit back with her second for Carlton, but the opportunities continued for Brisbane.

Carlton reduced the margin again through a third Jones' goal, but this was quickly back out to the final deficit of 35 thanks to a late Wuetschner goal.

Prespakis (27 disposals, four clearances) did everything she could and will need to ice her no doubt sore shoulders from carrying the Blues tonight. Kerryn Harrington had 21 disposals.

Brisbane remainsin Queensland, hosting Geelong off a short turnaround in Maroochydore on Saturday, while Carlton returnshome to host North Melbourne at IKON Park.