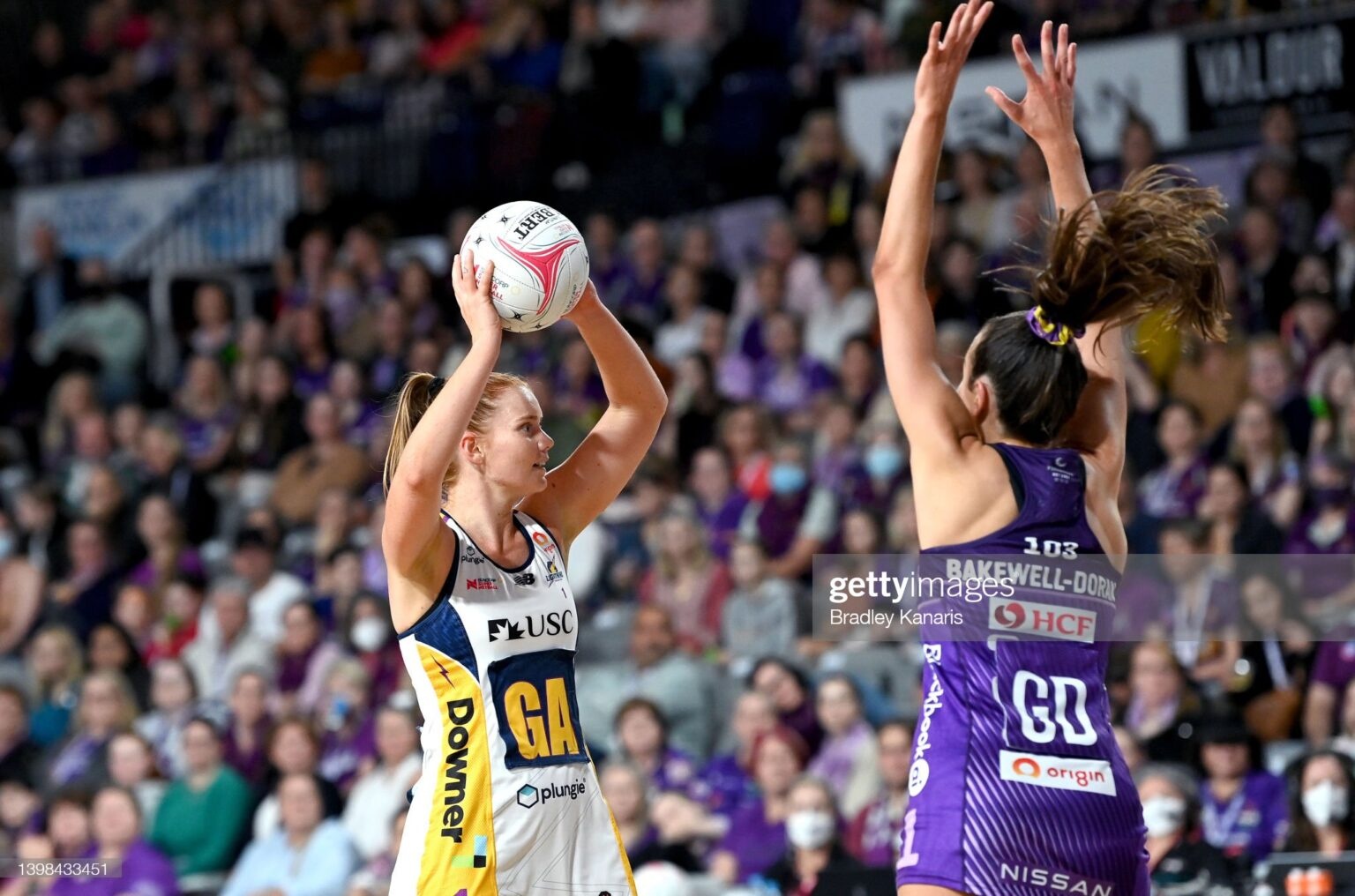 The Sunshine Coast Lightning have thrown a major spanner in the works by defeating the Queensland Firebirds by 21 goals to start Round 11.

The Sunshine Coast Lightning have thrown a major spanner in the works by defeating the Queensland Firebirds by 21 goals to start Round 11.

The Sunshine Coast Lightning have shocked the Queensland Firebirds in the Battle of the Bruce, to throw the Firebirds' finals hopes into doubt.

After losing their previous four games, the Lightning were all but eliminated from finals contention. Despite that, the cellar-dwellers of the ladder appeared determined to challenge the finals contenders for the rest of the year.

With the fuel that a number of players came from the Queensland Firebirds' environment, before making the trip up the highway to the Lightning, the visitors came out swinging.

A strong close to the first quarter, including two Super Shots for Steph Wood opened up a gap, as Kadie-Ann Dehaney and Tara Hinchliffe blanketed the Firebrids' shooting circle.

Annie Miller also started strongly, playing well against Gabi Simpson early, with four feeds in the first six minutes, before Kylee Byrne took her aside for some coaching.

The Lightning took a four-goal lead into the first break, and it never got any close than that. The Lightning had seven of the next ten goals, to stretch the margin by the midway point of the second quarter.

By half time, the Firebirds were eight goals down, and starting to show signs of trouble across the court.

Megan Anderson started to swing the changes early in the second half, bringing Kim Jenner and Mia Stower in for Eboni Usoro-Brown and Donnell Wallam.

The changes didn't help the Firebirds though, as Cara Koenen and Steph Wood piled on the pain in the third term. The third term was the closest, as the Firebirds only conceded one extra goal in the quarter, but they couldn't cut into the lead.

The Lightning brought out the changes for the final term, giving Annie Miller, Steph Wood and Kadie-Ann Dehaney an early finish, as they shifted up a gear.

The Lightning ran away in the final quarter, piling on a monstrous 28 goals in the quarter, while the Firebirds only managed 16, and the lead pushed out past 20 goals.

"To get a win like that took all 10 players to stand up and deliver on their roles. This new group was always to going to take time to establish what this new era of Lightning looks like, and this week we have seen absolute resilience and belief that sets us up for the remaining games this season.

"I couldn’t be prouder of what they did tonight."

OVER A THIRD – THE RUN HOME: PREDICTING THE FINAL LADDER

GIANTS JOIN TOP FOUR AFTER SENDING MAGPIES DOWN IN LAUNCESTON

After the game, a dejected Megan Anderson looking for the positives in the loss.

"It was an improvement on our last couple of games, but still not quite at the level we are used to," Anderson said.

"Early on, our defenders were getting us plenty of ball, but we jut weren’t converting it, just some crucial errors at really crucial times, when we were making a comeback, so that was disappointing from an attacking point of view.

"I just felt like we were in it and coming back for the majority of it, but it just blew out again then when we needed some two pointers in the end and had to take a few more risks.

"We haven’t had to chase too much throughout the year, so it's not something that we’ve normally done, but we know that Mia can do that for us. It's just a matter of making sure she can get that ball in two point times, I just think it was some execution errors that stopped the ball getting into our attack circle.

"The Lightning defence made us think twice about our passes. It was a different line up with Macey in there at wing attack, and Mia on there at shooter, so just those fine-tuning things that you need to get used to and we didn’t have that time tonight."

The Firebirds have now lost three games on the trot, and have put their finals chances in serious doubt as a result.

"We haven’t had much time on the training court this week, so it's really hard to fix things up that you need to work on. We’ve got two good solid sessions this week, so hopefully we can sort some things out and put on a good showing this week.

"The Diamonds selection week really did knock some of our girls' confidence, and they haven’t quite come back and hit their stride again.

"That’s something that we need to sort out pretty quickly for the last three rounds and salvage a bit of pride."

The Firebirds have three games to play, including both the Giants and the Swifts, who are above them, but will have to win at least two of their remaining three games to make finals.

The Lightning will need to win all three of their remaining matches, and have results go their way to be any hope of making finals.