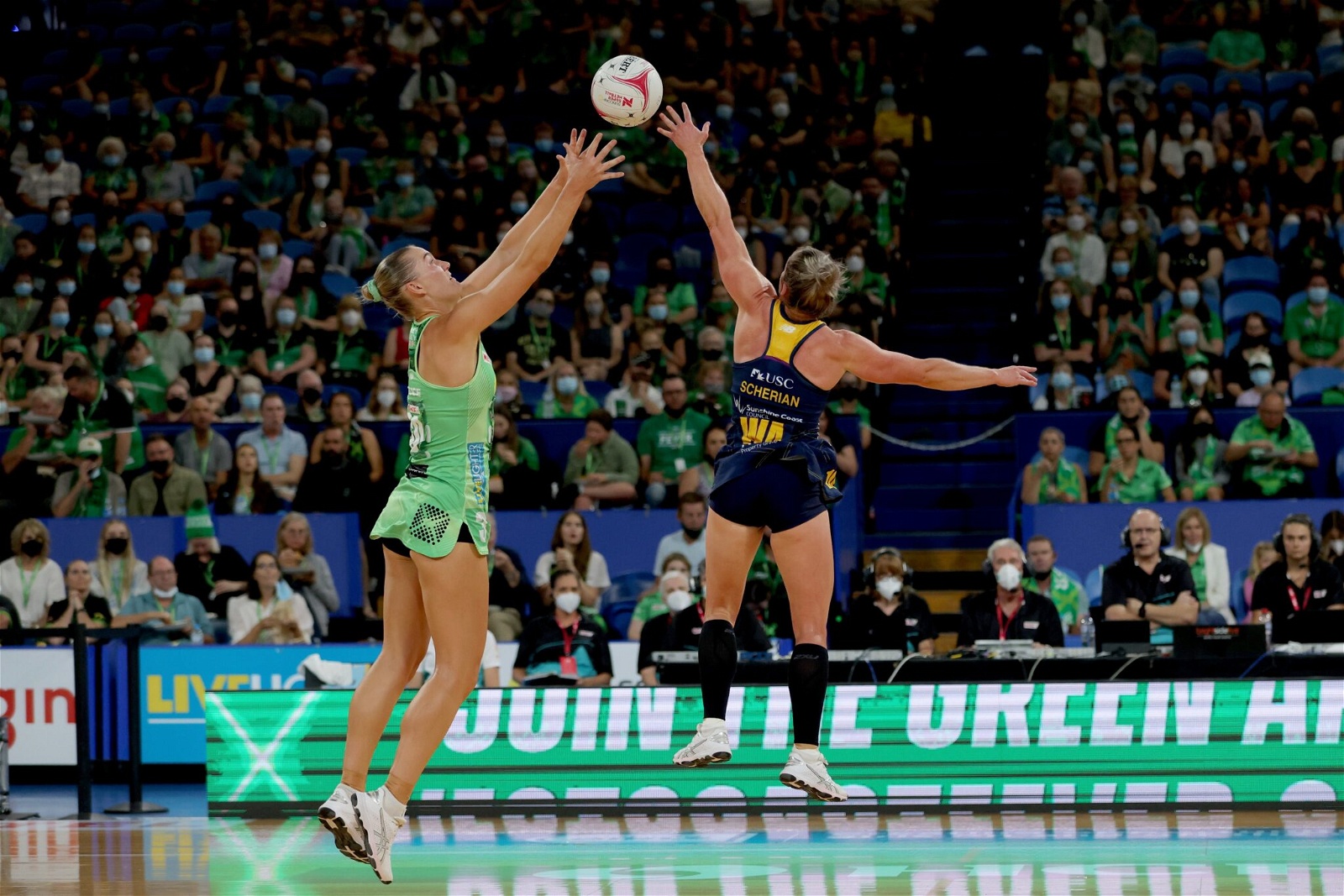 Lightning struck down with Fever in record breaking win

The West Coast Fever put up a record-breaking performance with an 82-63 win over the Sunshine Coast Lightning to end Round One of Super Netball.

Lightning struck down with Fever in record breaking win

The West Coast Fever put up a record-breaking performance with an 82-63 win over the Sunshine Coast Lightning to end Round One of Super Netball.

The Sunshine Coast Lightning proved no match for the West Coast Fever in Round One of the 2022 Suncorp Super Netball season, as the Fever flexed their muscle in a powerful win.

The Lightning didn't play poorly, with their 63 points enough to beat more than half of the competition in the first round. They just had the misfortune of coming up against a raring Fever, who never gave them a chance.

The Fever opened up with a new look lineup, in their first game under new coach Dan Ryan. Verity Simmons started in the centre circle, with Alice Teague-Neeld playing at wing attack, and Sasha Glasgow in the circle, and Jhaniele Fowler at goal shooter.

The lineup provides three forward half creators for Fowler, and is a chance to get the entire shooting trio all on the court at the same time, to pick up the rhythm of game quickly and effectively.

The strategy worked a charm, with Teague-Neeld picking up the only intercept of the first quarter, and the Fever scoring 26 goals in a lightning-quick (pardon the pun) start.

The Fever didn't slow down in the second quarter, taking a lead of 46-35 at half time.

Jhaniele Fowler was the chief destroyer, with 33 goals from 33 attempts at the main break.

The Fever started to make changes late in the second quarter, with Rudi Ellis coming on into goal keeper, and the change was matched by the Lightning, who brought on Reilley Batcheldor to make her Super Netball debut.

At the end of the third quarter, the Fever had put the match to bed, with 70 goals to the score, and a 26 goal lead. The highest ever score in National Lague history, 80, was well in sight.

At three quarter time, the Fever were converting 88 per cent of their centre passes to goal, an absurd rate that was a show of how effective the forward line had been with the new combination.

While the Fever's scoring slowed to a comparative crawl, with just 12 goals in the final quarter, but it was still enough to get over the hump, and break the record.

After the game, Dan Ryan was thrilled with the performance of his team.

"Really happy with that - its a great starting point for us," Ryan said.

"I don't think we expected a 20 goal margin, and certainly set that up with a cracking first quarter, and most pleasing to get all ten players out there contributing different roles at different times and to come home with a 20 goal win to kick off the season.

"Today was about enjoying it more than anything else. Its been a long preseason, its been a long couple of years for the end of the players, and at the end of the day, if you love what you do, you do it well, so we wanted to make sure there was a focus on getting out there, soaking up the atmosphere, connecting with the crowd and each other and the performance will come from that."

Aside from the Team Girls Cup, there was little exposure to the other Super Netball teams over the preseason, so Ryan was able to prepare a new-look forward line, that was unveiled today.

"We spent a lot of time in the preseason building the skillsets of the players in the lineup that have been here, and provided Alice with a great opportunity and now we've got some great depth and versatility in how we can play that line.

"We can do what we did last year, and we can throw some changes in there, and just having that variety and that confidence in the players to be able to do that and confidence in themselves to change that is great too."

As part of the new lineup, Sasha Glasgow played her best game for the Fever from the goal attack position, with Ryan paying tribute to her efforts to master the position.

"She's absolutely a work in progress, but today was a demonstration of the hard yards shes done in preseason and her diligence to learn more about the position but how her skillset can complement the ones around her as well, so she was exceptional today."

While the forward line was a new look for the Fever, the defensive combination of Courtney Bruce and Sunday Aryang is not new, and has even appeared at international level. Both represented Australia at the International Quad Series over the summer.

Today, the defence showed up, with the Fever managing 18 gains, as opposed to the Lightning, who only managed two.

"That combination continues to grow all the time, and I though Jess [Anstiss] did a great job starting in lockdown wing defence, and Stacey Francis-Bayman coming on at halftime and really impacted.

"To be able to throw Rudi out there to throw something different at the attack is really important as well, so a great combinations and great weapons to use to change it up."

Despite the huge margin, Ryan was unsatisfied with how his team finished the game.

"I think we can definitely be better in the final quarter. We didn't win that one. To win three out of four quarters, but there is always part of the coach that wants more and a four quarter effort is really critical. We played well in the last quarter but I thought we could have been a little bit more secure in how we played.

"Just to get everyone to experience game day and to experience the crowd and to get the season rolling will take a lot of the focus out of it and to shift on to next week."

Meanwhile for the Lightning, they will be counting the cost of the match.

The margin of the loss, and the fact that they had been blown off the court early will no doubt require some rebound.

More concerningly though, Cara Koenen failed to finish the match. The Lightning will be hoping her injury is not too severe, and that she will be back on court quickly.