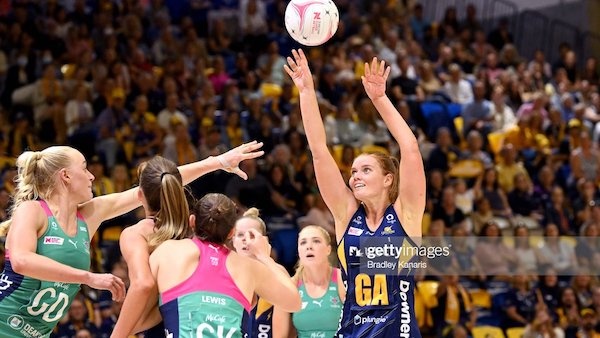 The Sunshine Coast Lightning have dealt the Melbourne Vixens their first loss for the year, dominating the second half for a 13 goal victory, 71-58.

The Sunshine Coast Lightning have dealt the Melbourne Vixens their first loss for the year, dominating the second half for a 13 goal victory, 71-58.

The Sunshine Coast Lightning have responded to their mid-week shocker, handing the Melbourne Vixens their first loss for the year with a dominant second half for victory, 71-58.

A change in the starting seven saw Kate Walsh start at goal defence and, with Steph Wood shooting the lights out, the Lightning found form in front of their home crowd for a sensational win.

The Vixens were less than impressed with Saturday's outing, a disappointed Simone McKinnis spoke post-match about the "shocker" third quarter that cost her side the game.

"Our third quarter was a shocker. I think we got caught up in their game, their crowd, all of that, I think that we panicked a little bit, and we really just didn't have winners in positions across the court. Lightning were super good tonight and we were searching for answers, so yeah, didn't cope well with that third quarter challenge."

Wood was upbeat, and deservedly so - her side had just beaten the ladder-leading Vixens by 13.

"I think we, well no, we knew we had that in us, and we've talked about it a fair bit and after last game it was less about the talk and more about the actions - put it out there.

"So, for us to go out there tonight against a really quality opposition and put that netball in front of an incredible home crowd, is something we knew we could do, and I think it sets us up now for our season."

The first surprise of the afternoon was seeing Walsh's name at goal defence on the team sheet. Byrne had been preferring Kadie-Ann Dehaney in the position and, with Dehaney moving to Sunshine Coast from Melbourme this season, her intel would be valuable. However, Byrne admitted post-match that after the way Walsh and Tara Hinchliffe finished off the game against the Magpies, it was worth a shot against the Vixens.

"We haven't had a lot of time since the last game, so look I was just happy with how Tara (Hinchliffe) and Kate (Walsh) ended the Magpies game, and with a bit more of a moving circle this week, I thought those two would do the job, and they definitely stood up today," Byrne said.

It was a tight opening quarter as the sides went goal for goal at times. A small run to start the Power Five by the Vixens was replicated by the Lightning, but it was the away side who took a lead of two into the first break.

In the second, the Lightning worked to exploit the Vixens' box defence through the leading of Wood in the front end.

Rahni Samason came onto the court for the Power Five at goal shooter, as the Vixens tried to further stretch out their lead. While the first to make use of the two point shot was Wood at the other end, it wasn't long before Samason drained one to put the Vixens back in front.

Feeling the heat after losing their lead to the Wood and Cara Koenen combination, the Vixens made a change to bring Olivia Lewis into goal keeper.

The Lightning's excellent second quarter saw them go into the half-time break ahead by two.

It all went downhill for the Vixens from here. In the third, the Vixens had three general play turnovers, made no intercepts (to the Lightning's two) and had zero gains (the Lightning had four).

A super shot from Wood in the opening seconds of the Power Five extended the Lightning's lead to seven and forced the Vixens to huddle for a time-out and reconsider their tactics.

The three-quarter time margin was 12, the Sunshine Coast home crowd had lifted and was willing the side through the final 15 minutes of play.

Sunshine Coast maintained its lead through the fourth quarter, not even a few wayward passes and other errors could stop the side from taking out a win over the previously unbeaten Melbourne team.

Wood looked to have her eye in on the super shot tonight, scoring five from six for the game, and after the match she said the use of the Power Five is something she and Koenen still find tough to know when to and when not to use it.

"Look I've openly said I wanted to shoot more of them (supershots) this year, and we've spoken about it, and it's very much like, shoot them, but then if you miss them, don't shoot them...

"You've just got to back yourself and that's the thing, Car's (Cara Koenen) and I spoke about at times I play the post and then kick it out, like don't both bust it in the super shot zone, play to post, kind of let the defenders relax a bit and then swing it back out, if it's on.

"And there were times, I think she was looking at me to shoot a super shot, but I was like nah, shoot the one, cause the super shot is great to build a lead, but it doesn't have to be taken every single time, you can play to the one."

While her super shots might have excited the crowd, Byrne was more impressed by Wood's efforts in the big moments.

"Yeah [she was in special form] and it wasn't just the super shots. What impressed me the most tonight was in the moments that mattered, she stood up," Byrne said.

"So, you know, they might have got a run, or we got a gain, and you just saw her energy rise and she just knows what to do in those big moments, and it was good seeing her back to her best today."

The Lightning were more consistent against the Vixens, one of the keys to their win was that it was a four quarter effort.

"That was a word that Kylee (Byrne) bought out in the change room before, and that's a big one, it's consistency. Because we have put some good quarters together this year, but we just haven't strung them all, all four of them."

However, Wood still sees the room for growth as she doesn't think her side's fourth quarter was at the same level as their third.

In the Vixens camp, McKinnis found a positive in the game, and that was the role of Hannah Mundy when she entered at centre in the third quarter and then moved to wing attack for the fourth.

But there's plenty of work for the Vixens to do after this contest. They'll return to the tape before turning their attention to the Adelaide Thunderbirds next Saturday night.

"We just have to refocus, we weren't good enough today, we have to acknowledge that, and work through what we need to from that game.

"But we just got to, you know, there's some super netball in this team, we've shown that, and we go and get back to playing how we know we can."

The Lightning will travel to Sydney for a clash with the Swifts next Saturday, while the Vixens return home for a run of three, beginning with the Thunderbirds.