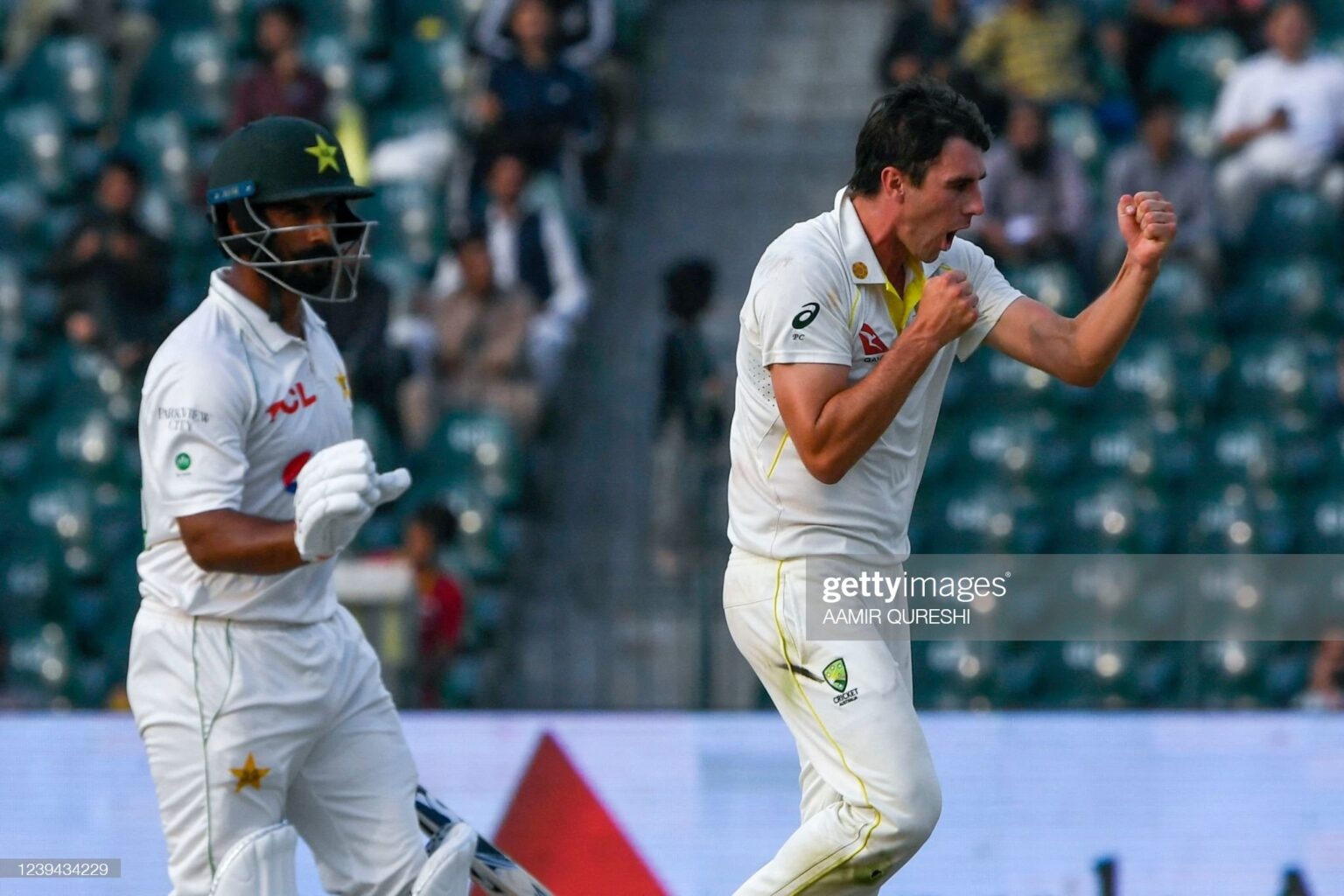 Starc and Cummins have destoryed the Pakistan middle and lower order late on day three to put Australia in a commanding positon.

Starc and Cummins have destoryed the Pakistan middle and lower order late on day three to put Australia in a commanding positon.

There haven’t been too many flatter pitches in Test cricket than what we have seen in Pakistan, even if the TV commentators aren’t allowed to say it. Australia will take a 134-run lead into the second innings after blasting away the Pakistan middle and lower order.

"I don’t think the wickets help the bowlers at all, the wicket started dead and has shot through lower and lower. The key is reverse swing and we saw Pakistan did it well in the first innings and it was Patty [Cummins] and I today."

Day three looked as if it was going to be another long day of run-scoring but late wickets with reverse swing saved Australia from what could’ve been Pakistan’s day.

Pakistan began the day on 1/90 with the two men in form Abdullah Shafique at the crease alongside Azhar Ali on 45 and 30 respectively. These two continued on their merry way through the first session pushing the ball all around the ground but at quite the slow pace.

In fact, the Pakistan pair only pout on 69 runs in the 28 overs of the morning session, it was hard to know at that point, but the slow run-scoring has cost Pakistan dearly in the end. Nevertheless, they survived pushing away the pace bowlers as well as the spin combination of Nathan Lyon and Mitchell Swepson.

It wasn’t until deep into the second session that Australia managed their first breakthrough. It was Nathan Lyon getting an edge behind to Alex Carey, it was an ever so faint edge that even the umpire didn’t pick up. Pat Cummins went for the review, and it paid off big time with Shafique having to go for 81.

It wasn’t his day today, but Shafique has been a revelation in this series. So far he’s averaged 92.50 with a century and two half-centuries that add to the two half-centuries he made late last year. He looks like a really exciting prospect and one to keep an eye on for the next decade of Pakistan cricket.

A small partnership continued between Azhar Ali and Babar Azam but even that came to an end before the tea break as Azhar Ali once again missed out on a century with a score of 78.

Fawad Alam survived through to tea and even passed it for a small amount of time but with the score on 248, the game changed completely.

Pat Cummins and Mitchell Starc came into the attack with just over an hour in the day to play. The ball all of a sudden began to reverse, the Pakistan batters could hardly put bat to ball.

Fawad Alam went first as Starc nipped the ball through the gate to rip out his stumps, only six runs later Mohammed Rizwan also missed one that nipped back in from Mitchell Starc meaning he also had to go back to the sheds.

It was now the turn of Pat Cummins to join in on the action. Pakistan went in with the high-risk high reward strategy of playing five bowlers and having Sajid Khan bat at number seven it clearly didn’t work.

In a matter of minutes, Pat Cummins ripped through Sajid Khan, Nauman Ali and Hasan Ali. Only four runs were put on between the first of those wickets falling and the last.

The wickets didn’t stop though, Mitch Starc had yet another go and smashed the pad of Babar Azam off before cleaning up the innings with Naseem Shah’s wicket.

AUSTRALIA MISSES MORE MILESTONES AS PAKISTAN COMFORTABLY GETS TO STUMPS

Pakistan’s last seven wickets fell for 20 runs, It’s the kind of innings that can completely destroy a tour and it looks as if that is what might happen tomorrow. With only two days left in this series, Pakistan needs to find something if they are to get back into this match. It was just the fourth time in Test cricket history that four wickets have fallen for zero runs.

Mitchell Starc spoke after play about how well the Australian attack bowled.

"Pretty good finish to the day, we said from the outset of the tour that things would happen quickly towards the back end of matches or days.

"To keep in control of the scoreboard and then once we had a sniff to finish the day like we did today I guess that’s the blueprint, I’m really proud of the guys today.

Finally, though we saw the Aussie seam attack stand up and take big wickets. Pat Cummins finished with 5/56 alongside Mitch Starc who took 4/33.

The pair answered a couple of key questions, firstly if Pat Cummins can still bowl well as captain, that one was always obvious. Mitch Starc also proved that he is still here to stay in Test cricket.

The truth about Mitch Starc is that he’s going to go down as one of Australia’s greatest all format bowlers, yet for some reason he attracts criticism. One man who should cop some criticism though is Mitch Swepson who didn’t look threatening in his 18 overs, in fact, he bowled less than half of Nathan Lyon’s 40 overs.

Australia had a small bat after bowling Pakistan out it was just three overs but they put on an extra 11 runs to push the lead up to 134 runs.

Mitchell Starc spoke on the plans for the rest of the Test.

"Things will start to quicken up at the end of today and then on days four and five, to end the day like we did.

"I think it’s a different wicket, this one has been quite dead from the get-go, it’s been shooting low and ever seen that happen more as the game has gone on. We are quite well rounded but last week we thought the wicket was going to break up more than it did, for us we’re in another position of opportunity."

Tomorrow Australia’s batters have a big job ahead of them, they need to score quickly in order to set up a total that Pakistan can’t reach but that also gives the Aussies enough time to take 10 wickets. The fourth innings will really be a big test for both of the Aussie spinners who need to show some guile against a team that plays spin very well.

Day four is set to be a big one tomorrow as David Warner and Usman Khawaja take to the crease at 4 pm AEDT.