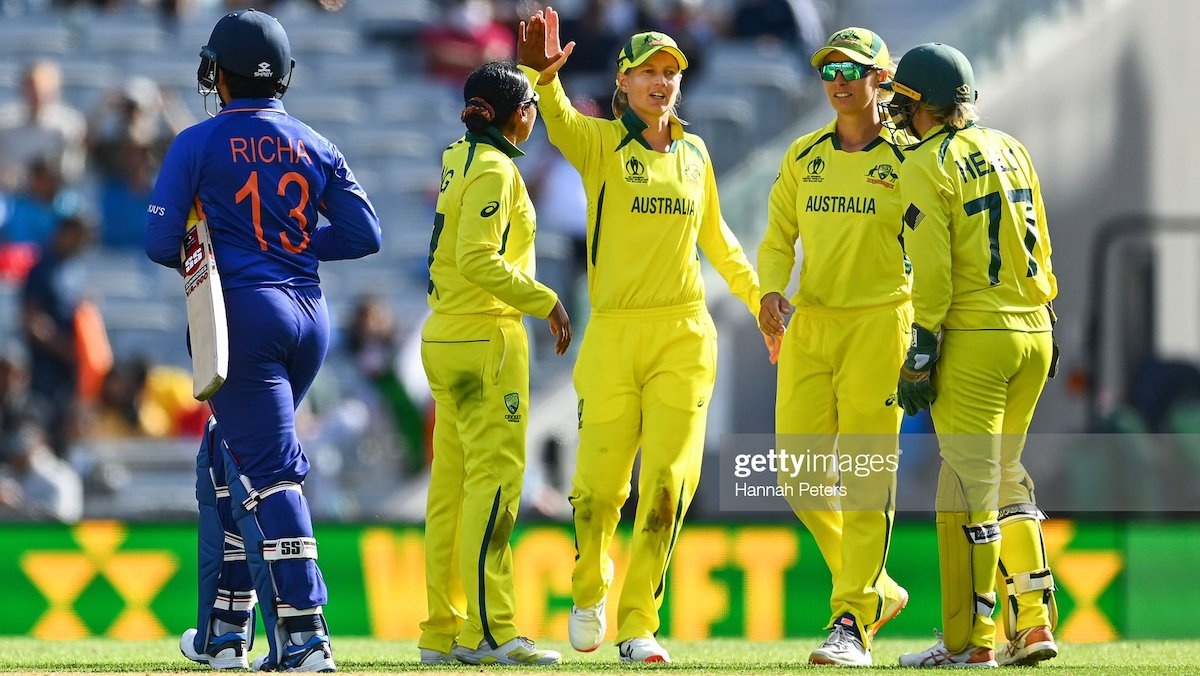 It was a tight call, but Beth Mooney was as composed as ever to finish off the chase in the final over. India challenged Australia, and rain threatened to dampen the contest, but it was a thrilling win that will give Australia confidence it can finish off close matches.

India's middle order batters put on an impressive total for Australia to chase down, but an opening partnership and a 97 run effort from the captain earned the win.

Another hundred run partnership between Lanning and Ellyse Perry was critical to Australia being in a position to win, after their openers had set them up beautifully.

Speaking of their partnership post-match, Lanning said they've got different games and hit to different areas of the ground, which she thinks helps them to put pressure on the bowlers.

"She's very calm, and so I think that that allows me to just settle in and play my game. She's a world class player, has been for a long time, and when she's at the crease I think everybody feels pretty calm," Lanning said.

"It was nice to be able to put that partnership together again, we felt like if we could put a couple of big ones together that was going to help get us over the line, and that's how it turned out."

Meg Lanning won the toss for Australia at Eden Park and decided her side would bowl first, with South Australian pacer Darcie Brown coming back into the XI.

India named Jhulan Goswami in her 200th ODI, and brought Shafali Verma back into the side for today's match.

Brown got the first wicket for Australia, Smiriti Mandhana edging her behind to Meg Lanning at slip. Brown drew Mandhana into the drive, but with the ball heading well outside off an edge reaches Lanning low.

Shafali Verma fell next, Brown taking the second opener in her three-wicket haul. This one was caught at gully by Beth Mooney.

An important partnership between Yastika Bhatia (59 from 83) and Mithali Raj (68 off 96) started to form, and the pair went on to make more than 100 and both hit their half centuries.

Another 50 came off the bat of Harmanpreet Kaur, who finished 57 not-out for the innings, as India batted its way to 7/277.

Jess Jonassen took the wicket of Sneh Rana for a duck and ran out Pooja Vastrakar for 34 off the final ball of the innings, to complete Australia's bowling efforts.

Australia's chase got off to a great start, as Alyssa Healy, supported by Rachael Haynes, put on a quick 50 run partnership in seven overs.

The Aussie's love of the bat-friendly wicket continued, Healy hitting a 49-ball half-century. It was a tight single, though, and the Australian would have been in trouble with a direct hit.

They took a look at an LBW appeal after Lanning was hit high on the pad, well in her crease. While it was clear of the bat, ball-tracking had the delivery missing off stump.

A second review from India in a matter of overs was a poor decision, this time it was pitching outside leg and the team had used both its reviews in the first 17 overs, without taking a wicket.

Healy's knock ended on 73, a reverse sweep gifted a catch to Raj at short third man, and it was the breakthrough India was desperately after.

Haynes fell soon after, caught by Richa Ghosh off the bowling of Pooja Vastrakar, and Australia found itself with two fresh batters at the crease.

With a bit to repay after going for 16 runs in just one over that featured 12 deliveries, Perry had to settle quickly out in the middle with Lanning. While the openers had done a good job to make a dent in the 278 run target, this pair would have to step up.

And they did, as they have many times before. In fact, Lanning and Perry have batted together in fourteen ODI run chases, and today was their twelfth 50+ run partnership from those fourteen matches.

The duo continued to tick off the milestones, taking Australia past the 200 mark and making their way to a 100 partnership, their ninth together in ODIs. Only Belinda Clark and Lisa Keightley have shared more century stands in women's ODIs.

While Lanning was the clear run scorer, Perry's patience and support at the crease were vital to the partnership.

Just as Australia was closing in, with 53 runs required, the rain finally reached Auckland and the players were sent from the field.

Perry was caught by Raj for 28 when play resumed swiftly, without the loss of overs.

With eight runs required off nine balls, Lanning was out for 97, just three runs short of a century.

Lanning said that while the individual achievement of making a hundred was not her focus, it's always a bit disappointing to fall so close to a milestone.

"To be honest, I just wanted to win us the game.

"I wasn't too worried about getting a 100. It would be nice, but yeah I was disappointed at the end there just to add a little bit of unnecessary pressure on Moons (Beth Mooney) and Tahlia (McGrath)."

Tahlia McGrath joined Mooney at the crease and the latter scored the final runs required with three deliveries to spare. A tight finish, but the Australian's remain undefeated and confirmed their place in the semi-finals.

BABAR AZAM CENTURY AS THE AUSSIES FAILED TO MAKE INROADS

While Australians watching along back home might have been feeling nervous, the camp in New Zealand was pretty confident it had the firepower to get the job done.

"We were pretty confident, to be honest. We had Moons (Mooney) there who was set and Tahlia McGrath, who is showing that she's very cool under pressure.

"So we'd expect to be able to get those runs on a really good batting wicket. Yeah it was frustrating for me to get out, I would have loved to be there just to finish off the game and not put that, I guess, little bit of unnecessary pressure on Tahlia (McGrath) and Moons (Mooney).

"But I think overall that was a pretty clinical choice. So, I thought Healy and Haynes set it up nicely at the top, they sort of got us ahead of the rate and that just allowed the new batters to come in to settle themselves in and build partnerships."

With five wins under their belt, the unbeaten Australians are still trying to piece together that perfect game.

"I'm not sure what the plan is!" Lanning laughed.

"I guess we've seen throughout this World Cup that there are a lot of great teams and anyone can win on any day. So you can't come in and expect to win.

We obviously want to win every game that we play, but we understand that it's going to be challenging. There's some world-class teams out there who really get up to play against us, and that's exciting for our group to be able to try and match that and make sure we bring our best every game.

"We want to make sure we're improving each game that we play - that's what tournament play is about, you want to be peaking at the right time and I feel like we're doing that. We've had different people contribute at different times, which we need - you can't rely on one or two players.

"So I feel like across the group, we've had some great contributions and everybody feels in a good spot, but we have to continue to get better and put that sort of perfect game together. That's what we're searching for and we've got a couple more games in... the round games to make sure that we do that."

Australia will play South Africa on Tuesday at Basin Reserve, Wellington with action from 9am AEDT.