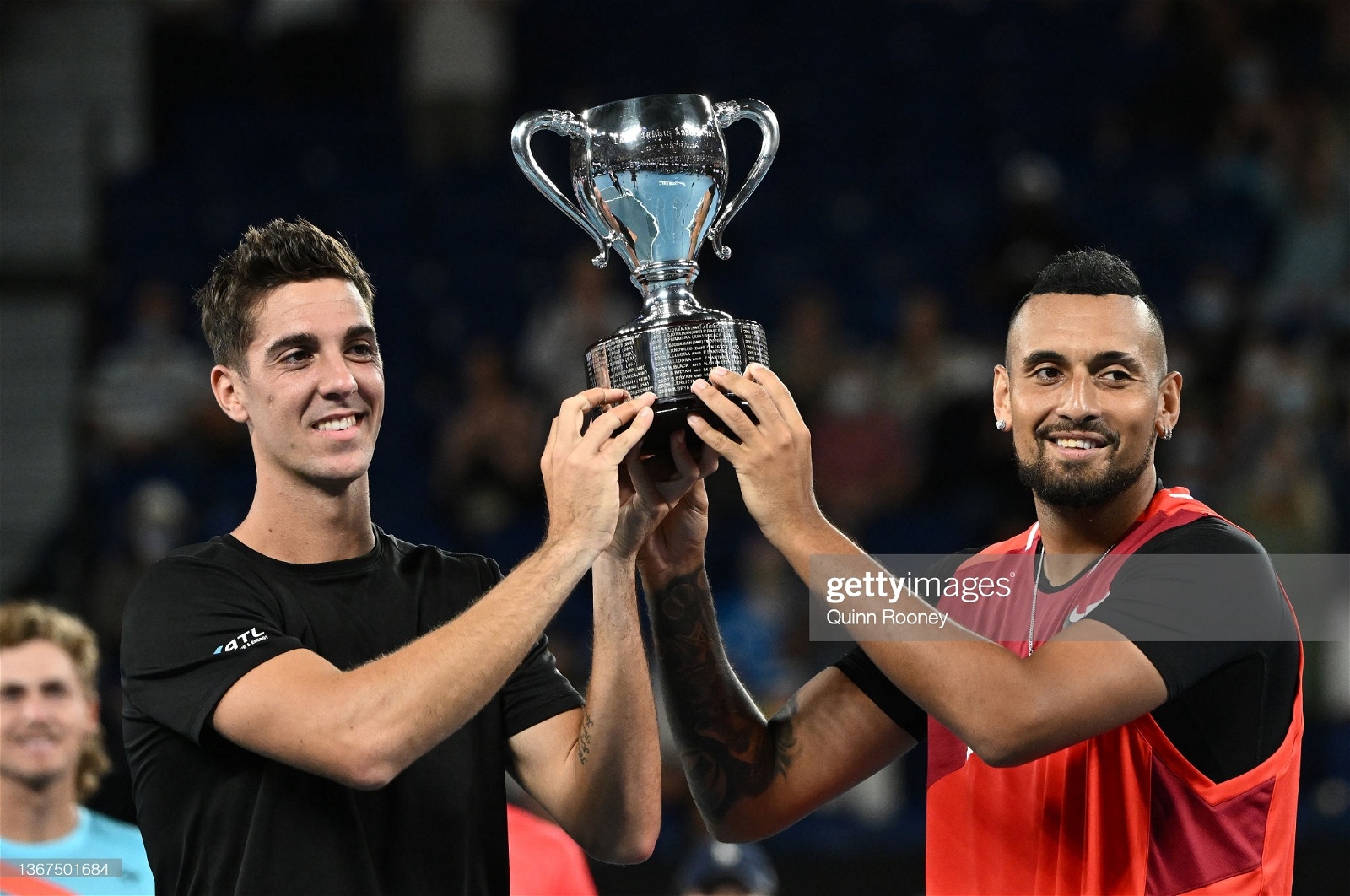 The all-Aussie men's doubles final was a fitting follow up to Ash Barty's Australian Open title victory, with the Special Ks winning in straight sets.

The all-Aussie men's doubles final was a fitting follow up to Ash Barty's Australian Open title victory, with the Special Ks winning in straight sets.

The all Aussie men's doubles final was a fitting follow-up to Ash Barty's Australian Open title victory, with the Special Ks, Nick Kyrgios and Thanasi Kokkinakis, winning in straight sets and becoming the first wildcard pairing to win the Australian Open Title in the Men's Doubles.

Both combinations were looking for their maiden men's doubles Grand Slam Title and neither one had an easy path to victory. Regardless of who won, it would be the first Aussie pair to claim the Australian Open men's doubles title in 25 years; the last to do so being Todd Woodbridge and Mark Woodforde.

Wildcards, Kyrgios and Kokkinakis came up against the first and third seeds, as well as fiery opponents like the sixth seeds Michael Venus and Tim Puetz.

Meanwhile, Purcell and Ebden's path to the final included the second and fourth seeds. Both of the top seeded pairs lost to the Aussies in straight sets.

Max Purcell was the first to serve, and from the jump the Special Ks looked to attack, particularly when Kyrgios was receiving. Ebden lacked the firepower at the net and didn't put away every shot, allowing the popular duo to attack him directly.

Kygios first serve didn't get anywhere near Purcell, earning the first ace of the final. Meanwhile Kokkinakis looked like an experienced doubles player at the net, preventing Ebden and Purcell from getting a single point in the game hitting two winners.

In Ebden's first service game it was Kokkinakis that had the easier time receiving, with three of the four points Kyrgios/Kokkinakis lost coming when Kyrgios was receiving.

The last of the quartet to serve, Kokkinakis didn't have the same ease his teammate did, faulting on his first serve three times. But that didn't matter because Ebden and Purcell seemed to have a harder time receiving the second serves over the first.

In the next four games, all four Australians seemed to find their footing on serve with Ebden and Kokkinakis both putting the jets on, fighting to play at every shot that came their way.

However, neither combo got anywhere near breaking with three of the four service games going to 40-30. The first in the quartet, Purcell, was the only one to serve a love game.

The Special Ks got the jump of Purcell's third service game for the match early, getting 30-0 ahead. But Ebden and Purcell were able to fight their way back into the game despite Purcell struggling with his first serves, with it going to deuce twice. However they managed to stay on serve, putting the pressure on Kygrios.

And pressure Kygrios' serve they did, benefiting from longer rallies where they could attack Kygrios once he came to the net. However, the 26-year-old was able to keep his cool and win points from his difficult to receive serves.

Three break point opportunities came and went for the Special Ks in Ebden's service game, with the more experienced doubles players fighting their way back into the game to bring it to deuce twice. Attacking shots from Kokkinakis were the difference to take the break on the fourth break point opportunity, hitting several winners and skilful returns.

It was Kokkinakis' job to serve out for the set, and he opened with his specialised wide serve that has done so well for the pair this Australian Open. All too soon he had three set points on his hands and he didn't waste them, serving out the set looking as in control as ever.

Purcell was the first to serve once again in the second set, with Ebden rallying and doing plenty of the leg work in the first service game hitting three winners and revving up the crowd.

Once again Kyrgios' serve was too good and Kokkinakis was able to attack with the forehand at the to keep them on serve.

Ebden's next service game was incredibly clean, winning the game 40-0 with the pair hitting two winners followed by an ace to win the game.

Although still troubled by his first serve, Kokkinakis' forehand winners into the alley were too good for Ebden or Purcell to even get near and when he did manage to keep a first serve in it was nearly unreturnable.

Purcell got the first look at the new balls and polished off an ace without any trouble at all. He motored through his service game lasting just one minute and 28 seconds, with the longest rally lasting five shots which was ended by a fantastic winner.

Another quick service game from Kyrgios put the pressure back on Ebden and a competitive rally between the quartet went the way of the Special Ks, followed by two attacking points offered the pair three break points. It was Kokkinakis who did most of the legwork once again, hitting a winner to take the break.

Despite hitting two aces, Kokkinakis served the first double fault of the match in the next game to keep Purcell and Ebden in it. But he made up for it covering half the court to hit a forehand into Ebden, that was hit into the net, falling in the process.

Play was halted briefly after a spectator was calling out in the middle of the points, with Purcell, Edben and Kokkinakis taking it to the chair umpire while Kyrgios demanded he be ejected, with the crowd giving the individual a chorus of boos as a send off.

Immediately after Purcell served his first double fault of the match, and Kyrgios and Kokkinakis won the next point from an unforced error. Despite the crowd getting more unruly as the Special Ks got closer to Championship Point, the play only got better with several extended rallies at the net bringing the entertainment.

The first Championship Point was dismissed with Kokkinakis unable to get control of a Purcell serve and they'd have to wait to see if Kyrgios could serve out the match.

The final game started with a Kokkinakis winner and was followed by two successive aces before Kokkinakis finished it off with a backhand winner right down the middle of the court.

It's the pair's first doubles title together since Junior Wimbledon in 2013 andcaps off an incredible January from Kokkinakis in particular after he won his first ATP singles title at the Adelaide International in the lead in to the Australian Open.

Off the best month of his career Kokkinakis thanked his team as well as the crowds and Kyrgios labelling the title as a 'crazy cherry on top'.

"Wow, what a week, first of all, [I'd] like to congratulate Max and Matt, hell of opponents, great doubles pairing, great guys, so yeah super tough match but great week all round.

"Secondly, Nick I love you brother. I can honestly say we did not expect to even come close to this but with the help of you guys all week, it had been unbelievable, the coverage it got, the support for us we couldn't have asked for anything more.

"Thanks to my team it's been a rough couple of years for me personally, the last few years but what a month we've had, I couldn't ask for anything more coming into Aussie Open I was already happy and this is a crazy cherry on top so thanks for all the work, thank you."

Krygios in awe of the moment appeared to be lost for words at moments as he spoke to a happy Rod Laver Arena.

"Honestly, this week has been a dream come true for me, I wouldn't want to do it with anyone else. Max has been to the finals twice, I believe, so he's a hell of a dubs player and Matty's had a hell of a career so I'm just super happy I don't even know how we're doing this or what's going on right not to be brutally honest.

"Everyone that came I know it's been a tough couple of years. I battled covid a week out of Aus Open, and my team, I wouldn't have been here without you guys."