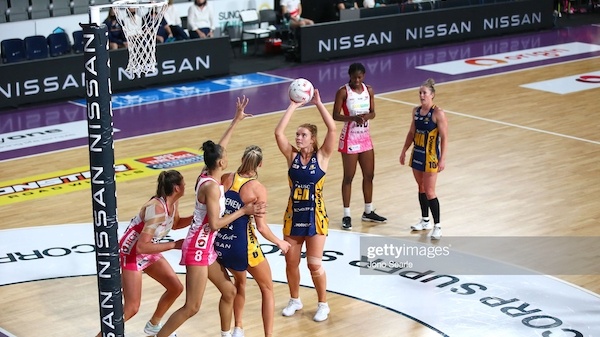 When the Australian Diamonds line up this Quad-Series, there is a Super Netball combination that could link up in the green and gold for the first time: Steph Wood and Cara Koenen in the goal circle.

While Koenen has been around the Diamonds squad for three years now, she only made her debut in March 2021 at the Constellation Cup in New Zealand. Her Lightning teammate Wood was injured and did not feature in the squad that travelled.

It was an exciting series for the 25-year-old, who took ownership of the goal shooter bib in just four trans-Tasman matches, but the Diamonds have not played since.

The Quad Series, beginning on Sunday morning, presents a new opportunity for Koenen to cement her position at shooter and push for the combination with Wood to be the preferred choice come Commonwealth Games time.

Speaking to media before flying out to London, Koenen was excited by the prospect of taking the court with her Sunshine Coast teammate, and good friend, Wood.

"I think that obviously Steph and I have been playing together now for quite a few years, we have a pretty good connection I’d like to think on court," Koenen said.

"And obviously that gives me a lot of confidence going into a tournament like this, especially with limited preparation with the rest of the group - obviously borders posed quite a [few] problems for us last year coming together as a full squad.

"I think that I take a whole lot of confidence knowing that we’ve trained together over the last few months heaps and looking forward to what we can do."

While Koenen would love to take to the court with Wood as her trusty shooting sidekick, she is also excited to build other partnerships with Gretel Bueta, Sophie Garbin and young gun Sophie Dwyer.

"We’ve got such a diverse group though, heading into this tour, so we all bring very individual strengths and we’ve got a couple of days in Sydney and then when we head over to the UK we’ve got a few training sessions before we actually start taking the court.

"It’ll be really, really nice to continue to build on our connection against international opponents, but also getting to know a few of the other girls a bit better on court and strengthening those connections so that we’ve got many, many options when it comes to game time."

The pairing only strengthens the two individuals, which Lightning coach Kylee Byrne is very proud of.

"I think back in the last Constellation, which was March, Cara was able to put her hand up without Steph by her side, which was amazing and showed that she’s deserved this selection and wearing the green and gold dress," Byrne said.

"We all saw what she did there, which [included] that player of the match performance, so the fact now that Steph’s beside her… that connection is there with both of them, and I haven’t seen them both train as hard or prepare for a season as they have in the last two months.

As for how she'll feel when the pair get on court together in the Diamonds' dress, Byrne had a huge smile and was almost emotional as she spoke of what it would mean for herself, the club and those who have been a part of the journey with them.

"I’m genuinely excited to see what they both can do and it’ll be a huge moment for us as a club and those that have been with them for the last five, and even 10 years, to see both of them on the court together and I hope that that happens in the first test."

SHARELLE MCMAHON TO BE IMMORTALISED IN BRONZE

Koenen and Wood are not the only Super Netball combination that could hit the court for Australia.

Melbourne Vixens' teammates Liz Watson and Kate Moloney may play alongside each other in the midcourt, while Sarah Klau and Maddy Turner could be given the chance to run a NSW-Swift's-like-muck in defence, and if Sunday Aryang gets her debut she may be in the defensive end with Courtney Bruce, just like when they play for the West Coast Fever.

During the squad's two day camp in Sydney, Marinkovich spoke about how the Diamonds' can utilise the pre-existing combinations as a strength of the team and have them support the development of new partnerships on court.

"I think for us, it’s been thinking about what are the strengths of the team, of the individuals and the way in which players interact together," Marinkovich said.

"I think the way in which we’ve constructed our language, the systems that we’re putting in place are to play to those strengths and what it is now, is the responsibility and that shared ownership across the entire group to get the connection between more than just the players that they associate directly within SSN.

"This is the part that gets exciting, when you get your best players in Australia coming together, the energy and the way in which they take on board training, they challenge each other to the enth degree, but there is just this underlying commitment that they all have a role to play.

"Whether that’s as a squad member, driving the standard in which we train, whether it’s a starting seven-player or its a player coming off the bench to impact the game, there’s an understanding that there’s a role to play at particular points in time and everyone’s embracing that, which makes it a really close-knit and a team that can really target our vision with real unity."

The Diamonds realise they will be going into the Birmingham Commonwealth Games with just eight Test matches under their belt in two years. It's far from ideal, but it gives even more meaning to this Quad Series.

There are new combinations to trial at the International level and four games to do it in. How many variations will the Diamonds try out using the 15 players in their squad?

Super Netball fans, and especially the Sunshine Coast Lightning supporters, will be hoping the Koenen and Wood combination in the goal circle is one that gets plenty of court time!

The Australian Diamonds are in London to defend their Quad Series title, with games against the Proteas, Roses and Silver Ferns, from January 16.