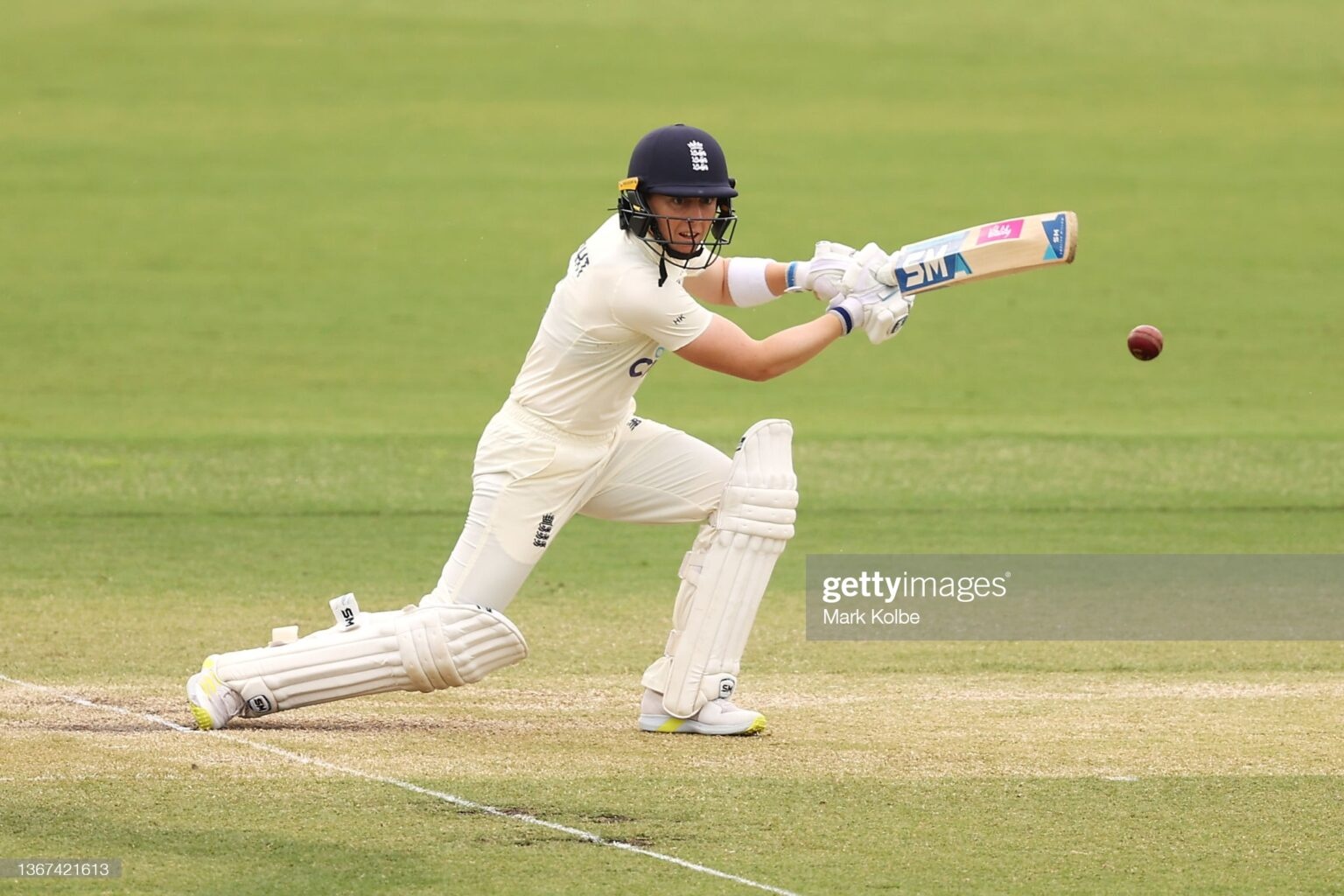 Knight succeeds in quest to frustrate Australia in Ashes Test

Heather Knight played a starring role with a brilliant innings, but the weather gods played a big part in Day 3 of the Ashes Test.

Knight succeeds in quest to frustrate Australia in Ashes Test

Heather Knight played a starring role with a brilliant innings, but the weather gods played a big part in Day 3 of the Ashes Test.

Heather Knight played a brilliant innings to have an unbeaten 168 as England, and then the rain staved off any Australian hopes of a win in the Ashes Test match.

After resuming at 8/235, 102 runs behind, England were hoping to reduce the deficit before losing the final wickets. Heather Knight resumed at 127 not out, with Sophie Ecclestone on 27 alongside her.

Knight proceeded to put on a display of ferocious strokeplay, dispatching the Australian bowlers to all parts of the ground. The most visible part of her innings was her ability to play safe and aggressive, in what was a chanceless innings.

With the Australians holding onto that lead of just over 100 runs, there would have been optimism in the Australian camp that the bowlers could pick up the last two minutes quickly, and the Australians could take a strong first-innings lead and take the match away from the English with an aggressive second innings.

The Australians failed to take their chances in the morning, dropping catches for the first time in the match, and they would prove costly.

It wasn't to be, as Ecclestone and Knight frustrated the Australians, pushing the ninth-wicket partnership to 100 before Ecclestone fell to Tahlia McGrath, trapped plumb lbw off a vicious ball.

Kate Cross came to the crease with the English at 9/269, but continued to bat with freedom, as she leaned on her first ball almost sending it to the midwicket boundary.

Cross continued to occupy the crease while Knight went on the attack, before she eventually fell to a short ball from Elyse Perry, with the English all out for 297.

Knight was undefeated for her highest score, 168 from just 294 balls, and her performance had singlehandedly taken the advantage away from Australia.

Things were made worse for the Australians, as Alyssa Healy was dismissed for a duck, giving her a pair for the match, a dreaded statistic for an opener.

Fellow opener Rachael Haynes fell for four runs, as she edged onto her pad and the sharp catch was taken by Tammy Beaumont at short leg.

The Australians found themselves at 2/12 when the heavens opened. There was no further play for the day, and despite the added overs tomorrow, any chance of a result is small.

Knight spoke after the day's play about her innings.

"I think it's my best innings for England," Knight explained. "The situation we're in, in an Ashes game, against probably the best innings in the world, so super pleased.

"I felt quite rusty actually at the start. They bowled pretty well with the first new ball, despite probably bowling a little bit more in the channel and not making us play. When you've played a lot of white-ball cricket and you've got a red ball moving in the channel, it's quite hard not to have a little flirt with it."

Knight paid tribute to teammate Sophie Ecclestone, whose 34 played a key role in frustrating the Australians and allowing Knight to bat for longer.

"Sophie's batting was unbelievable. The team really needed her to stand up, and she's actually got a really sound technique, she was hitting the ball a lot straighter than I was.

"Really chuffed for her that she was able to put in that sort of patient knock, facing over 100 balls and doing a real job for the team to obviously get past that follow-on, first and foremost, and then to get so close to the score."

The English side managed to get within 40 runs, after being almost 232 runs behind when the eighth wicket fell and took enough time out of the game that the rain could play a part.

Australian all-rounder Ash Gardner talked after the day's play about the intent to try and get into a winning position tomorrow.

"It's certainly going to be pretty hard. We've only got a lead of 52 at the moment, and I think we've got 109 over to play tomorrow.

"I think it's going to be pretty tough to get ourselves in that position, obviously we would love to get anywhere around the 200 mark.

"Hopefully we can score some quick runs tomorrow and then we can get about 50 or 60 overs at them."

Both players made reference to the fact that Women's Test matches are only four days, and any rain delay makes a result difficult.

"In the three test matches that I've played, rain has affected every single one of them, so it's always made it pretty challenging to get a result," Gardner said.

"It's really frustrating. We've put ourselves in a really nice position, and the way we came out just before lunch was exactly what I asked of the girls," Knight said.

The Australians will resume at 2/12, leading by 52 runs with eight wickets in hand. There will be 109 overs tomorrow, with play resuming at 9:30 am AEDT on the final day of the Test match.