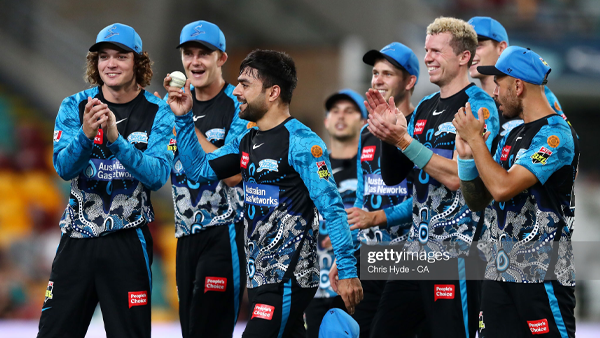 In his final game of BBL|11, and his 300th T20 game overall, Rashid Khan provided a spark for the Adelaide Strikers - with both bat and ball - to guide the team to victory over the Brisbane Heat.

In his final game of BBL|11, and his 300th T20 game overall, Rashid Khan provided a spark for the Adelaide Strikers - with both bat and ball - to guide the team to victory over the Brisbane Heat.

In his final game of BBL|11 and his 300th T20 game in his career, Rashid Khan provided a necessary spark for the Adelaide Strikers, guiding the side to a 71-run victory against the Brisbane Heat at the Gabba.

Despite the home side welcoming six first-choice players - Chris Lynn, Xavier Bartlett, Liam Guthrie, Nathan McSweeney, Matt Kuhnemann and Ben Duckett - back into the lineup, many of those inclusions couldn't maximise their chances within the game.

Afghanistan international Rashid Khan turned the game on its head at various points throughout the entire match, with both the bat, but mostly the ball, the leg-spinner finishing with figures of 6/17 from four overs - his best figures of BBL|11 and his T20 career, which also takes him to an outright lead in this season's list of leading wicket-takers.

Khan's contribution to the game began when he made his way to the wicket in the 16th over of the Strikers innings after Jake Weatherald departed and while his time in the middle was short, it was still electric.

Khan hit two sixes from the first two balls he faced, launching the ball over the rope at opposite ends of the wicket - long stop and long on - before being undone by a fellow countryman Mujeeb Ur Rahman, predicting Khan would expose his stumps, and finding an edge onto the stumps, bowling the Strikers all-rounder.

However, where Khan did the most damage was with the ball, dismantling the Heat's batting lineup, especially down the order on the way to the eventual victory.

Strikers captain Peter Siddle first brought Khan onto bowl in the seventh over - which went for an expensive 11 runs as Duckett took hold of the leg-spinner, hitting two fours within the over.

Although, the ninth over was where Khan - and the Strikers - started to inflict further damage to its opponents - the side recording a team hat-trick from the Afghan's first three balls of the over.

Lachlan Pfeffer was the first causality of the over, the unfortunate victim of a mix-up between him and Duckett. Playing a full-length delivery to midwicket and wanting a quick single, Pfeffer was halfway up the pitch before being sent back, but couldn't make up the ground and was run out.

With his second ball of the over, Khan had Sam Heazlett gone for a golden duck as he was caught, cramped on the crease and attempted to push the delivery to the on-side, however, only found a faint edge straight into Harry Nielsen's gloves.

Khan would complete the team hat-trick when Jake Lehmann played all around a well-pitched, flighted ball that spun back in, bowling the Heat batter, and earning Khan his second wicket of the night.

Khan was rested until the 13th over when he entered once more, and in continuing good length deliveries of multiple varieties, he claimed his third wicket, Will Prestwidge - also for a duck - when he tried a slog sweep but found Weatherald on the boundary rope at long-on.

As the tail-end of the Heat lineup began to be exposed, Siddle placed a couple of slips into position for the remainder of the over, however it would just go for two runs.

Despite the Heat electing to use its power surge following Khan's third over, he was still entrusted to bowl his final over when the field was set to two outside the circle.

In the 15th over, Khan began with a dot ball, before bowling Kuhnemann, then having his revenge on Ur Rahman who was caught by Short at deep mid-wicket. The hat-trick ball didn't come as Bartlett hit a single, but two balls later, Khan had his sixth, combining with Short again - this time at slip - to have Guthrie's wicket, and end the game.

Speaking to Fox Cricket post-game, the outgoing star said his performance, and the way he plays, especially in this format, was all down to enjoying himself and trusting in his craft.

"I think this format is just all about enjoying yourself, your skills inside and giving one hundred per cent and keep smiling," he said.

"I think that is something that gives me energy inside, I really don't worry about the reason a lot, if it comes on my way or the other way, I'm pretty happy but my process remains the same, I keep smiling and keep enjoying myself. I think that's how the success comes and I'm mainly focused on that. There's specific things I do but I just enjoy my skills and my talents."

Although he now leaves for international duty with Afghanistan set to host the Netherlands in a three-game One Day International series in Qatar from Friday, Khan made sure to mention how humbled he's been by the team, and fans.

"Since the first year I've been with the Strikers, the love I got from the fans and the team, the boys have supported me through all my seasons and have given me so much love and all the freedom," he said.

THE MELBOURNE STARS GET SCORCHED BY 47 RUNS IN GEELONG

The Strikers started the game well with the bat, however, Short fell for 27 off 19 just before the end of the powerplay off the bowling of Will Prestwidge, having dispatched the bowler for two fours leading up to that delivery.

Brisbane's first-choice seamers, Bartlett and Guthrie couldn't get their deliveries in the right positions as Henry Hunt and Weatherald cruised along, despite some building dot-ball pressure. Kuhnemann finally found the breakthrough two balls after the midway drinks point, bowling Hunt for 25 of 26.

Prestwidge picked up his second, again in a positive reply after being hit for six by Weatherald, looking to go big again but being caught at deep square leg. Khan fell next for 13 off 4, but not before his hard-hitting display as Jon Wells 23* off 24) and Thomas Kelly (24* off 16) saw out the 20 overs, the former being the more damaging in the partnership, hitting a four and a six to start the 17th and 18th overs, respectively.

The Heat never truly got going in its chase, losing McSweeney (five off five) in the first over and Lynn (seven off seven) in the third. A small partnership between Pfeffer and Duckett added 45 runs - including a couple of boundaries each - before the carnage created by Khan.

The Heat lost 8/28 within seven overs to come crumbling down and finish with a score of 90 runs. While Bartlett utilised the fielding restrictions in the first over of the power surge, taking Siddle for 15 runs including three fours, Khan again made sure to restrict the chase and bring an end to the match.

The Adelaide Strikers return to Adelaide Oval for a matchup against the Perth Scorchers on January 14 from 10:10am ACDT while the Brisbane Heat are on the road for a January 16 meeting with the Melbourne Stars at the MCG from 7:15pm AEDT.