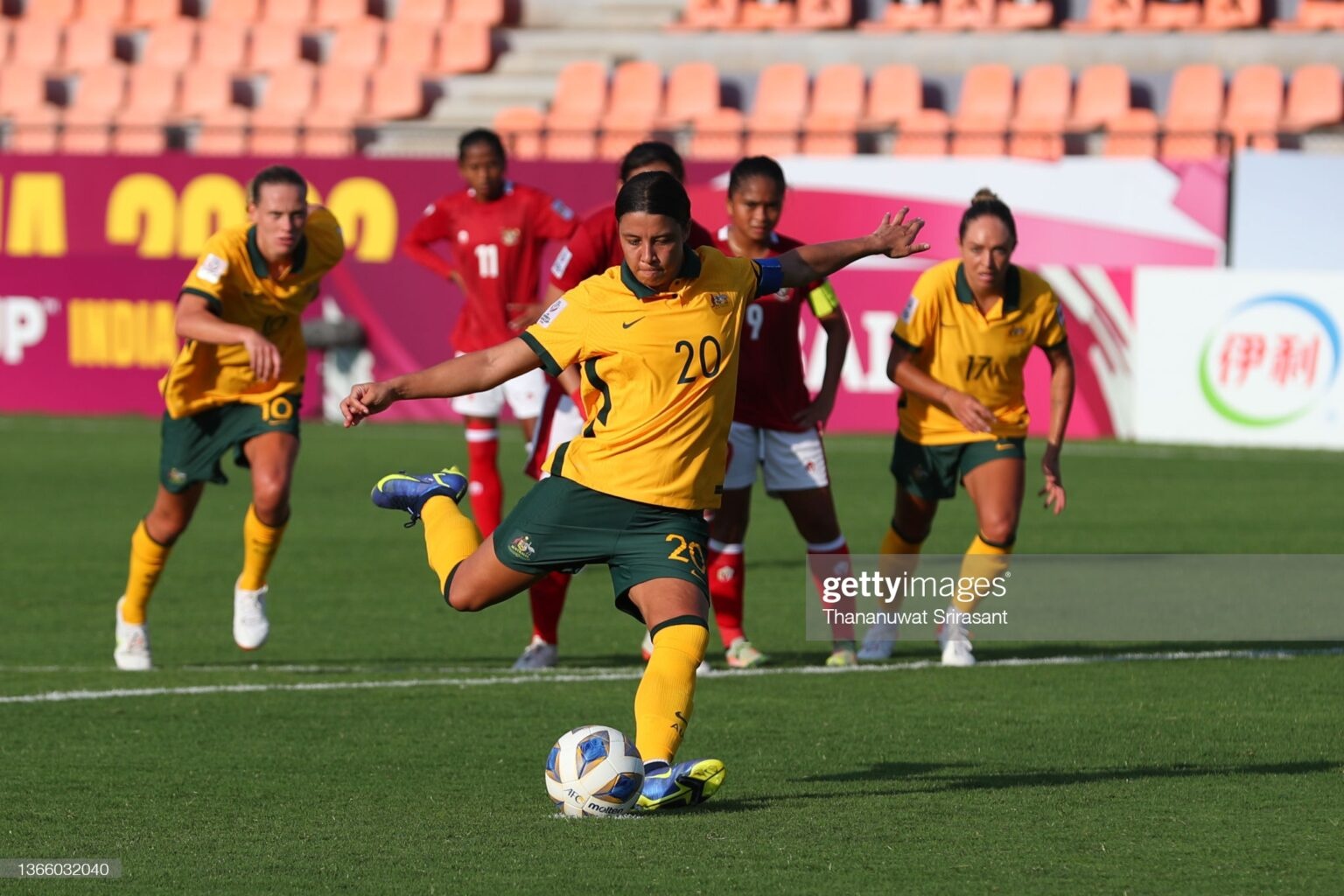 Kerr-ly start for the Matildas at the Asian Cup

The Matildas opened their Asian Cup with an emphatic 18-0 win over Indonesia, on the back of five goals and a national record from Sam Kerr.

Kerr-ly start for the Matildas at the Asian Cup

The Matildas opened their Asian Cup with an emphatic 18-0 win over Indonesia, on the back of five goals and a national record from Sam Kerr.

Sam Kerr scored five goals for the Matildas to become the most prolific Australian football goal scorer of all time, as the Matildas opened their Asian Cup with a monstrous win against Indonesia.

Kerr came into the match having scored 49 goals for Australia, one behind Tim Cahill, who had the most goals for an Australian in international football. It took her all of nine minutes to draw level with Cahill as she opened Australia's account.

It took about 90 seconds before she overtook Cahill, as she tapped in an assist from Emily van Egmond.

Kerr spoke after the game about the significance of the milestone.

"Obviously Timmy's a legend in Australia, so to be in the same conversation as him is an honour, but anytime I score for my country it's an amazing honour, and... I didn't have many so I don't take any goal for granted, and I said after the game there's no team I'd rather do it with, and it's an honour to wear the jersey with the Matildas."

Kerr then started to run riot, and five minutes later, she set up Caitlin Foord to make it 3-0 for Australia.

The pain for Indonesia didn't stop at the 15-minute mark, as moments later Mary Fowler showed exactly why she is considered one of the bright heirs to Australian football. She took full advantage of Ellie Carpenter's run and speed and made it 4-0.

Less than ten minutes later, Foord was paying it forward, this time with an assist for Hayley Raso to capitalise.

The onslaught prompted substitutions for Indonesia at the defensive end, as Shalika Aurelia and Rani Mulyasari came on.

The changes didn't stem the bleeding, as a penalty was awarded, and Kerr stepped up to the mark to seal her hattrick.

Carpenter, after dishing one off, finally got an opportunity after half an hour. A Raso pass out into space allowed Carpenter to run onto the ball, and from the edge of the penalty box, bury the ball in the top corner of the net.

Before halftime, van Egmond again provided an opportunity for Kerr to tap in her fourth goal, before Kerr won a penalty, and van Egmond stepped up to the spot and scored in the same bottom left corner as Kerr.

At halftime, it was 9-0, and talk was on that the record for the biggest Matildas winning margin ever, against American Samoa in 1998 was under threat.

Matildas coach Tony Gustavsson rung the changes at halftime, with his team comfortably up. Clare Polkinghorne, Steph Catley, Fowler and Foord were all given early showers, as Tameka Yallop, Courtney Nevin, Aivi Luik and Kyah Simon came on.

Despite the changes, the Aussies weren't slowing down, as Carpenter floated a long cross over Nurhalimah's head and found the back of the net. After waiting almost five years between her first international goal and her second, Carpenter had scored her third 15 minutes later.

It didn't end there, as Kerr scored again, bringing her total to five, and van Egmond chipped in two more to have a hattrick of her own.

Even a missed penalty by Kerr didn't seem to affect the Matildas, as Simon added two goals in a matter of minutes, while van Egmond added a fourth.

The Matildas never took their foot off the gas, as Aivi Luik broke through for her first international goal in the 79th minute, and Hayley Raso scored her second just moments before full time.

After the game, Gustavsson praised his players for keeping their foot on the gas, as they finished 18-0, and played at a high level all the way through the match.

"I brought the players together after the game, and I only had one thing to say," Gustavsson explained. "I was impressed by the professionalism of the players to stay focussed for every second of the game, from the first second to the last."

"I think we set the standard going into this tournament, what we're about, and what we want to do. It was a great opening game for us.

"In the opening game of the tournament, it's very important to set the tone for the team and get off to a good start."

Kerr echoed this sentiment as well.

"We showed the ultimate respect to Indonesia by coming out with our best team. We scouted them out and we knew they had some tricky players and we weren't going to take them lightly," She said.

"This is the Asian Cup, and we want to get as far as we can in the tournament, and I think that's the biggest respect we can show the opponents."

When asked about specific performances of Alanna Kennedy and Emily van Egmond, who played key roles in the centre of the defence and midfield respectively, Gustavsson had nothing but praise for his stars.

"First of all, I think what both of them did what the whole team did, they were very professional and very focussed.

"What can happen at times, particularly at Alanna's position at centre back, is that when the game looks like it looks, it can easily be that you lose focus, and not get involved as much, but she stayed focussed, she led the backline, and she communicated a lot. Her passes to open up the middle were great.

"What's impressive with her is her understanding of the game, She knows exactly where to be, when to be there, and to connect the team and the link to the team. She's like the heartbeat of the team and the tempo controller of the team, and she impressed me in that sense today.

The Matildas next match is against the Philippines on Monday night at 9:00 pm AEDT.