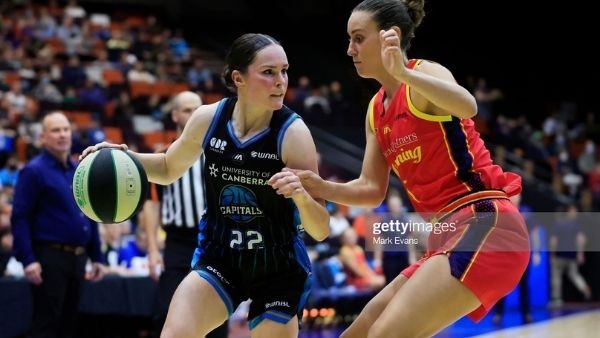 Kelly Wilson to write her name into the WNBL history books

Kelly Wilson will have her name forever engraved into the WNBL history books as she's set to be the first player to reach the 400 game milestone.

Kelly Wilson to write her name into the WNBL history books

Kelly Wilson will have her name forever engraved into the WNBL history books as she's set to be the first player to reach the 400 game milestone.

UC Capitals player Kelly Wilson will write her name into the WNBL history books on Wednesday night as she becomes the first player in WNBL history to play 400 games in the league.

After surpassing former Dandenong Rangers and UC Capitals Champion Jess Bibby (394 games) to break the WNBL games played record during the 2019/20 season while playing for the Bendigo Spirit, she took the 2020 season off as she had her first child.

Wilson's career first started all the way back in 2002 when she started with the Australian Institute of Sport.

Wilson made the move to Sydney Uni Flames for the 2003/04 season to play under a previous WNBL games record holder in Karen Dalton. During her first season at the Flames, she took out the WNBL rookie of the year award.

Wilson has played an integral role in all the clubs she's been involved in, being a four-time championship player across three clubs.

After winning the championship with the UC Capitals, Wilson moved back to the club played 186 games for in the Bendigo Spirit, which saw her break the all-time games record that season.

Wilson has also been successful on the International stage, having won gold with the Opals at the 2013 and 2015 Oceania championships.

After returning to the game in 2021/22, for the UC Capitals playing alongside good friend Kelsey Griffin, she hasn't missed a beat. Averaging 33.4 minutes per game along with 8.3 points, with no signs of slowing down.

She's been a key to the Capitals success so far this season as they sit second on the WNBL ladder.

Wilson's Capitals will be looking to get the win in her milestone match as they take on rivals in the Sydney Uni Flames on January 5 at the National Convention Centre in Canberra.