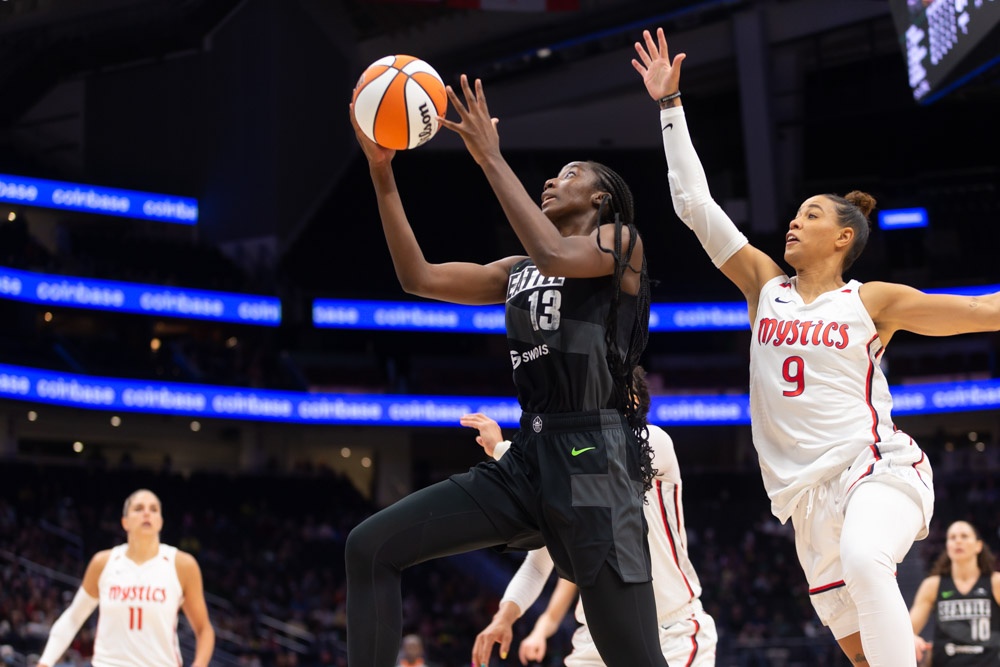 Keeping up with the Aussies in the WNBA: Week 15 edition

The final week found some Aussies fighting for their playoff lives while others were firmly in the postseason.

Keeping up with the Aussies in the WNBA: Week 15 edition

The final week found some Aussies fighting for their playoff lives while others were firmly in the postseason.

There has been a lot happening in the WNBA over the last few weeks, especially with all of the Australians involved.

Tina Charles agreed to a contract divorce with the Phoenix Mercury and joined the Seattle Storm, which, in turn, bumped Ezi Magbegor to the bench.

Liz Cambage abruptly left the Los Angeles Sparks for a multitude of reasons. Yahoo Sports reporter Chris Haynes wrote a detailed report on the events that led to her departure that you can check out here. On August 15, Cambage announced on Instagram she’d be stepping away from basketball to focus on personal growth.

Week 15 proved to be the most crucial week for Kristy Wallace’s Atlanta Dream and Bec Allen and Sami Whitcomb’s New York Liberty, who were both fighting for their playoff lives, albeit against each other for the last two games.

On the other side, Ezi and Steph Talbot’s Seattle Storm came into the week to preserve their seeding, having been in the playoffs for a few weeks. Here are the events for this past week for the Aussies in the WNBA.

Kristy Wallace: Wallace did not appear in any of the Dreams’ final three games of the season due to health and safety protocols.

Atlanta finished tied for 9th overall in the league with a final record of 14-22. Their 87-83 loss at the New York Liberty on August 14 ended their season.

The Liberty found themselves in a sticky situation regarding their playoff destiny. Every single game was a crucial element to their hopes of securing a spot in the postseason. After two tight wins to conclude the season, New York found themselves clinching the seventh seed.

Rebecca Allen: Spida continued making an impact in the Liberty’s final four games even if it wasn’t in the stat sheet. In a 86-77 loss at the Dallas Wings on August 8, Bec didn’t contribute much on the box score. She recorded two points, three assists, two rebounds, a steal, and a block on 1/5 (20% shooting) in 21 minutes.

Two days later, the Liberty concluded their trip to Dallas with a 91-73 win. Bec was way more active and had a greater, more balanced impact in that win. She started and recorded seven points, four rebounds, two assists, a steal and a block on 60% shooting. Her sole block was an electric one, swatting away Marina Mabrey’s shot attempt in the first possession.

On August 12 at Atlanta, Coach Sandy Brondello made the decision to move Allen to the bench in favour of Betnijah Laney, who recently came back from injury. Regardless, Bec played starter-like minutes with 20. She had seven points on 60% shooting and a rebound to secure a crucial 80-70 win over the Dream.

The Liberty returned home to play their final game against the Dream with the biggest stakes. It was a win-or-go-home situation. Their backs were against the wall as they fought throughout their playoff-clinching 87-83 win. Bec recorded seven points, two rebounds, an assist, a steal, and two blocks on 43% shooting in 18 minutes off the bench.

Sami Whitcomb: Whitcomb’s minutes periodically decreased throughout the latter part of the season after the Liberty traded AD Durr to the Dream for Marine Johannes on June 8th. Regardless of minutes played, whether it be single digits or 20+ off the bench, she still impacted the game every minute she got.

In game one against the Wings, she only appeared for nine minutes and scored three points, shooting 33%. Game 2 was when she shined in the series against the Wings. Whitcomb again appeared off the bench but had such a stellar first half that Coach Brondello decided to start her in the third quarter over starting point guard Crystal Dangerfield.

That decision served fruitful as Sami finished with a team-high 15 points, four rebounds, five assists and a steal. She shot 63% from the field and an eye-popping 57% from three. When asked about starting Sami in the third, Brondello stated, “I thought her defence was really solid. She gives us more offensive scoring…I always go with my gut. Doesn’t mean I’m always right, but it worked out tonight.”

The Storm were in a vastly different situation than the other two teams. They were already guaranteed a playoff spot. It was only a matter of which seed they ended up with. They played three games, going 2-1, against the two best teams and one team that ended up missing the playoffs. They clinched the fourth seed once the season officially concluded.

Ezi Magbegor: Despite Ezi now assuming a bench role after the signing of Tina Charles, she’s still producing at a high level. She’s making the best of her situation and hasn’t been disappointing.

On August 9, in a 111-100 win over the Chicago Sky, Magbegor scored 13 points, two rebounds, and an assist in 16 minutes of action. She only missed one of her shots from the field, shooting at an 86% clip.

In a blowout 96-69 win over the Minnesota Lynx, Magbegor didn’t produce the way she’s been consistently performing throughout the season. A large factor was being guarded by legend Sylvia Fowles. She scored four points, two rebounds, an assist, and two blocks on 50% shooting and 15 minutes off the bench.

In the Storms’ regular season finale against the Las Vegas Aces, they found themselves on the losing end, dropping a hard-fought battle by a score of 109-100. Ezi didn’t record any points, but she did gather six rebounds and an assist in 16 minutes off the bench.

Stephanie Talbot: Against the Chicago Sky, Talbots only appeared for nine minutes, but she did have a great impact. She scored six points, one rebound and two assists on 67% shooting from the field, which were both threes.

In the following game against Minnesota Lynx, her minutes increased. Whether it was due to the blowout is not relevant because every minute is valuable, no matter the score. In 15 minutes off the bench, she scored seven points, four rebounds, one assist, and a steal.

Lastly, against the Las Vegas Aces, Talbot hit two threes in limited time off the bench. In nine minutes, she scored six points, two rebounds, an assist, a steal, and a block.

That concludes the regular season of the WNBA. Tune in next time for an Aussie in the playoffs update.