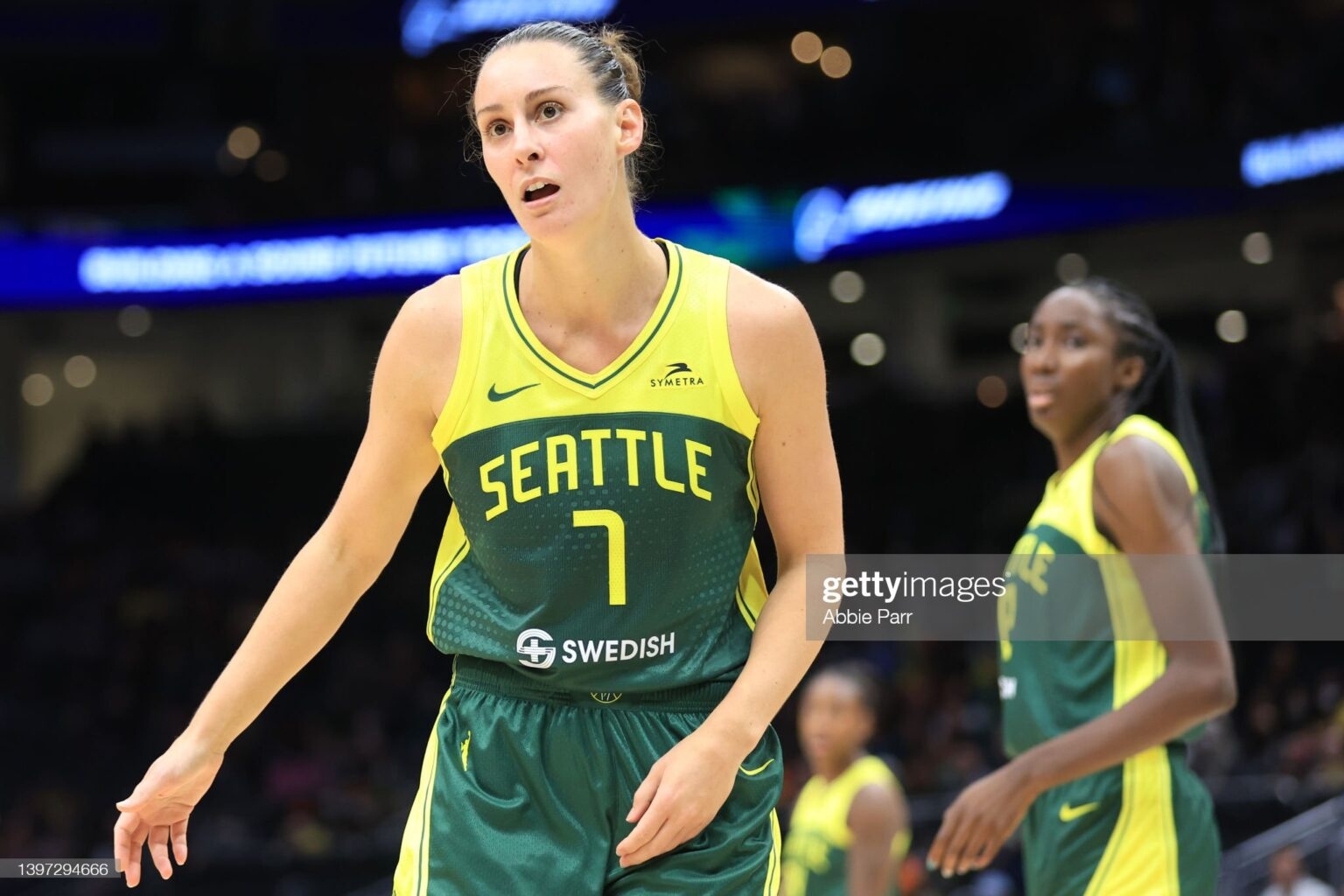 Keeping Up With The Aussies In The WNBA: Week 1 Edition

Week one of the WNBA regular season has come and gone but it was not without its fill of Australians making their debuts.

Keeping Up With The Aussies In The WNBA: Week 1 Edition

Week one of the WNBA regular season has come and gone but it was not without its fill of Australians making their debuts.

Week one of the WNBA regular season has come and gone, but it was not without its fill of Australians making their debuts, stuffing the stat sheet, and producing highlight plays.

As of May 16 in the United States, there are nine Australians listed on WNBA rosters. All but one player made their 2022 season debut but that will be subject to change. With that being said, let's jump right into an overview of each of the Aussies in the WNBA.

Kristy Wallace, guard, Baylor: The 16th overall pick in the 2018 WNBA draft, and the 2021-2022 WNBL sixth woman of the year with the Southside Flyers, made her WNBA debut on May 7th against the Dallas Wings. After an extremely productive preseason debut, the rookie earned a starting role in the rebuilding Dream squad. She averaged 14 points in the two preseason games.

Anneli Maley, forward: The 2021-2022 WNBL MVP with the Bendigo Spirit had an interesting path to solidifying her spot on the Chicago Sky. First, she signs a training camp contract for the Sky. After preseason, she is waived. Shortly after, she clears waivers and is signed to a hardship contract for the Sky. Finally, the team announced they re-signed Maley on May 10.

In the Sky's two preseason games, she averaged 8 points per game, but her rebounding really stood out for Coach James Wade. She averaged 4.5 rebounds in those two games while going after both the offensive and defensive boards.

In the Sky's three regular-season games, she showed why she's an important asset to the Sky. Note: she only appeared for two minutes in Chicago's most recent game against the Minnesota Lynx. In her regular-season debut against the Sparks, she only put up two points, but her defence is what truly allowed her to stand out. She was all over the court in that game, recording four rebounds but also an impressive three steals. In the following game against New York Liberty, she scored a career-high six points and had a block.

Alanna Smith, forward, Stanford: After spending her first three WNBA seasons riding the bench with the Phoenix Mercury, Smith found her place in a rebuilding Indiana Fever team. She is finally able to show her skills and potential with way more playing time than she had with the Mercury.

Initially, Smith signed a training camp contract with the Fever, but it was widely expected she'd make the regular-season roster. She's appeared in all five of Indiana's games, starting only one. Regardless of playing a bench role, Smith is producing.

Indiana's second and third games of the season were the two games that Smith truly shined. She hit the hardwood for 17 minutes in both games and shot practically lights out. Against the Sparks, she shot 50% from the floor, grabbed two rebounds, a steal, and sent back two shots. Against the Lynx, shot 66.7% from the field and grabbed five rebounds, two steals, and one block. So far, she's averaging 4.8 points and 2.6 rebounds per game.

Amy Atwell, forward, Hawai'i: In a league like the WNBA, where there are only 12 roster spots per team for 144 in total, it is practically unheard of for a 3rd round pick to make a roster. In comes Atwell, who was picked 27th in the 2022 WNBA draft by the Sparks. The 2021-2022 Big West player of the year is the second player drafted from Hawai'i.

Atwell shined in the final game of the preseason, scoring 19 shots on a perfect 6-6 shooting from three. That performance was enough for Sparks head coach Derek Fisher to select her to the roster.

Coach Fisher trusted Atwell enough to start her in the first game of the regular season against the Sky. She has yet to score but is being aggressive and getting nice looks. In their most recent game against the Connecticut Sun, she recorded a career-high 13 minutes, a rebound, and two assists. It is only a matter of time before Atwell breaks out her scoring.

Liz Cambage, centre: The former Australian Opal and Olympian found a new home in LA after a two-year stint with the Las Vegas Aces. She was with the Tulsa Shock/Dallas Wings before her trade to Vegas in 2019. (Tulsa moved to Dallas and rebranded to the Wings in 2016.)

Cambage continued her ruthless scoring to begin the season, averaging 15 points per game in four games. Her best game came in a win against the Fever, where she recorded a double-double with 22 points and 11 rebounds. In the following game against the Dream, she recorded a season-high in blocks with five.

So far, along with her 15 points per game, she's averaging 5.3 rebounds, one block, and two steals in 23 minutes.

Rebecca Allen, forward: Allen has yet to appear in a game as she was finishing up her overseas commitments with Valencia in Spain. Bec will make her season debut on May 17 in the United States against the Connecticut Sun.

In the season opener against the Sun, she had a stellar outing dropping 15 points on 50% shooting from the field, five rebounds, five assists, and three steals. She recorded zero points in the next game against the Sky but followed that outing with seven and nine in the next two games, respectively. Despite her slow scoring start, in which she's averaging 7.8 points in four games, she's all over the court in her rebounding, playmaking, and disrupting the passing lanes. She's averaging 2.8 rebounds, 3.5 assists, and 1.3 steals in four games so far. Whitcomb is producing all around the court, allowing her to impact the game in different places other than scoring.

Ezi Magbegor, forward: After being a primary bench player in her first two seasons with the Storm, the 2022 WNBL champion has found herself in the starting lineup in the first four games of the season. Ezi's expanded role is allowing her to show off her versatility on both sides of the ball while showing her growth.

Magbegor is currently shooting 39% from the field, but her presence on the boards and defence is the most impressive line so far. On the May 14th game against the Mercury, Magbegor had one of the best games of her WNBA career. She poured in eight points on 40% shooting, but her defence stole the floor. She grabbed a season-high 10 rebounds along with two steals. Her most impressive stat of that game was her seven blocks which is a career-high.

Ezi is turning into a defensive machine. She's becoming a wall in the post that opposing players will fear when going up against her. In four games, she's averaging 8.8 points, 6.3 rebounds, 1.8 steals, and 3 blocks per game, good for second in the WNBA.

She also passed the 50 career block milestone in the game against the Mercury.

Stephanie Talbot, forward: Steph is in her second season with the Storm and she's already improving in practically every single statistical category. In four games, she's averaging 7.3 points and 5.8 rebounds per game, which are way up from her 2021 final stat line in those two categories. Her 24 minutes per game are also, so far, a career-high.

Along with Ezi, Steph had a career game against the Mercury. She scored eight points but most impressively grabbed 14 boards with eight on the defensive end and six on the offensive end. That game also happened to be Talbot's first start of the season in place of star Breanna Stewart. She hits two triples in the first half, one of them being the game's opening points.

Flashback to the May 6th season opener against the Lynx. Talbot played in 22 minutes off the bench and scored 11 points on an efficient 67% from the field. Overall, Talbot is averaging. She scored three and seven points in the next two games, respectively. Assuming Stewart is out for the Storm's next game, Talbot should get more playing time and continue to build off her great outing against the Mercury.

That's all for this week in Keeping Up With The Aussies In The WNBA. This upcoming week of WNBA hoops is bound to be an exciting one. See you next week for the Week 2 update!