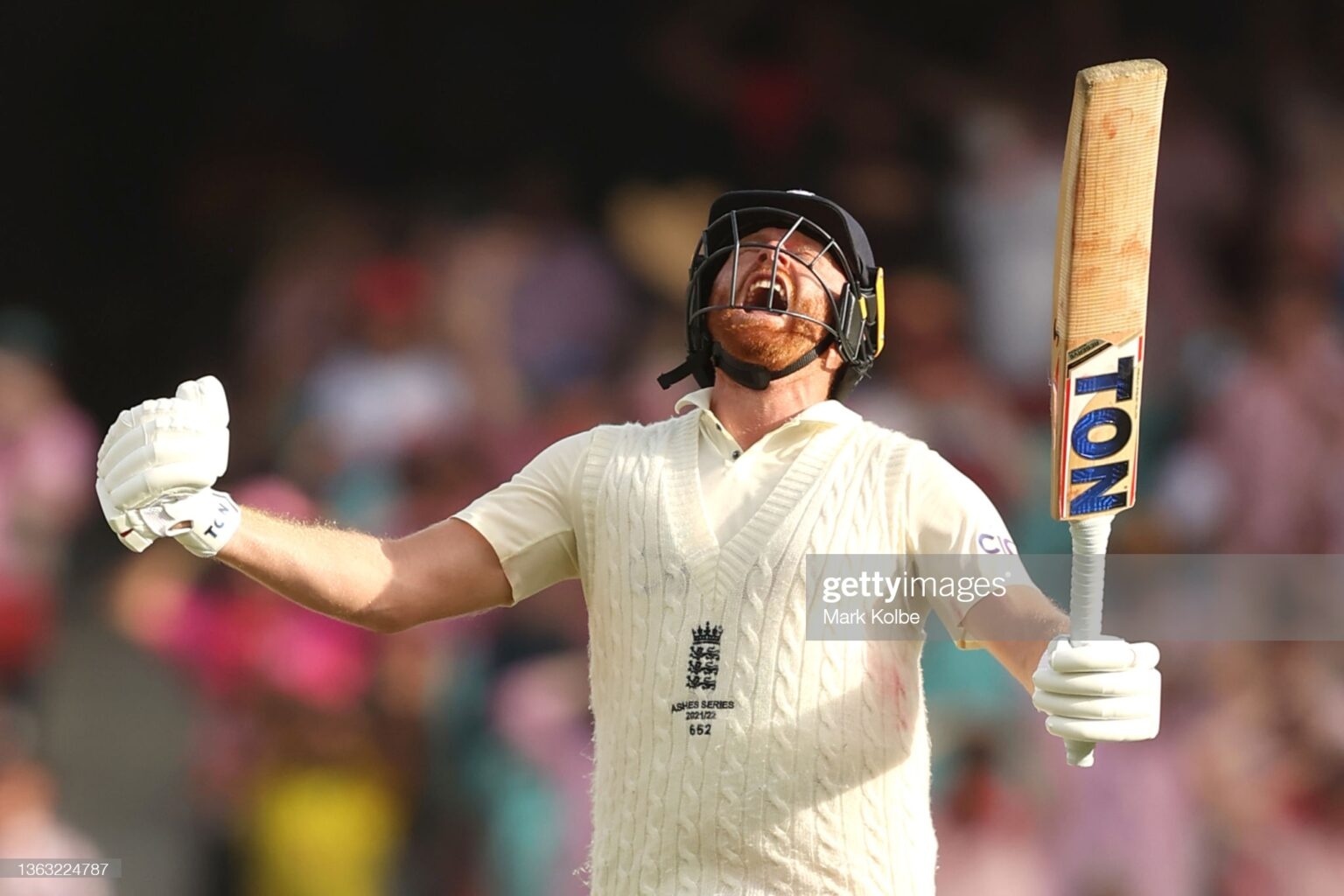 Jonny Bairstow's redemption is complete with a huge century at the SCG to put England in a good position ahead of day four.

Jonny Bairstow's redemption is complete with a huge century at the SCG to put England in a good position ahead of day four.

Jonny Bairstow's redemption came to the fore as he struck a century after England were in serious trouble at 4-36. He guided his side past to the follow-on target and beyond as he struck an unbeaten 103* on day three of the fourth Test.

Early rain delayed the start of the match until well after the starting time, eventually though both teams managed to get onto the ground. Haseeb Hameed and Zac Crawley looked good for a small amount of time. Zac Crawley in particular played a couple of great straight drives off the bowling of Pat Cummins.

The Zac Crawley wicket really was the start of one of England’s worst collapses. It was Joe Root that then went edging a wide one out to slip before Dawid Malan flicked one to leg slip on the lunch break. England had lost 3-0 in the space of 10 overs all while not scoring. Yes, that’s right 10 maidens were bowled in a row between Pat Cummins, Scott Boland, and Cam Green.

Justin Langer spoke on the bowling after the days play.

"It was just relentless, incredible bowling, and then as we've been waiting for it was a great fightback [by England].

"We've been relentless with our lengths and lines and have bowled good pace. Ben [Stokes] then threw a bit of caution to the win regarding his batting."

Something good must have been served for the English lunch because when they came out the game had changed. Ben Stokes although injured looked to take the fight to the Australians. Hits on the body were constant, one into the thumb of Bairstow was particularly bad, he required some treatment and must be in some doubt for the next Test.

The thumb injury was quite bad but Bairstow was determined to not go off the field.

"It takes quite a bit to get me off the park, yes it was sore but in the circumstances, it was one of those where it was a decision I made to stay out there.

"These are decisions you take upon yourselves and the medics gives you advice, but ultimately it's an Ashes Test and it will take a lot to get you away from that,"

Australia at least will be hoping that Bairstow is in doubt, his hitting was impeccable. England only really offered up one chance, that being a caught and bowled from Stokes which Cummins dropped, he just couldn’t hang on in his follow-through. Although who could possibly forget the review Australia had for LBW that had actually bowled Stokes, the only issue for the bowler Cam Green was that the bails didn’t fall off.

Stokes and Bairstow looked to take the attack to Lyon almost treating him in the same way Australia treated Jack Leach at the Gabba. At one point before tea Lyon had figures of 0-54 from nine overs, it was incredible the way that Bairstow in particular was able to sweep him consistently into the legside. It was easy to see why England thought Bairstow was the answer in India his play against the spin was world-class.

The pressure looked on, especially on Pat Cummins who hasn't really faced a challenge as of yet as captain. Justin Langer spoke on this.

"He has a lot of support around him. England had the better of us for the last two sessions, so that will be good for his development.

"It can't always be rainbows and butterflies and he found that out, but so far he hasn't put a foot wrong yet."

After tea, though Lyon did manage to strike, an arm ball came into Ben Stokes who misread the ball, it crashed into his pads, and he had to go. Stokes was so confident that it was out he was walking even before the decision was given.

Jos Buttler didn’t look all that interested out in the middle, he was out chipping to cover. It’s hard to see how Buttler can stay in the side with the effort he put in today. Perhaps Jonny Bairstow could take the gloves and Ollie Pope, or Dan Lawrence could find a spot back in the middle.

Bairstow did touch on whether the thumb injury would affect his possible keeping. He interestingly didn't say that the keeping position was Buttler's to have.

"I don't know as of yet [whether he could keep], I'm not sure about keeping but from a batting point of view I'll be out there in the morning."

A solid down the order contribution from Mark Wood allowed Bairstow to continue on, even if he was stuck in the 90s for a long period of time. Wood eventually was out to a contentious review, the snicko didn’t quite line up with the pictures we were seeing.

Bairstow though soldiered on eventually bringing up his century with Jack Leach out in the middle. Playing second fiddle is of course a job that Leach knows plenty about after having done it so well for Ben Stokes at Headingly.

Bairstow was extremely happy with his performance after the days play.

"I'm absolutely over the moon if I'm honest, it was the hardest one [century] so far. To put the work in and get the partnership with Ben was a big one.

"I feel like I still had the ability to do it, it hasn't been easy over the last two years but you know how much this means to me."

Today though really was Jonny Bairstow’s day, he was clinical and tough. It would be impossible to count the number of times he was struck on the body. He will come out tomorrow looking to give England a lead or at least something positive for his bowlers. England are not yet out of this game.

Justin Langer spoke on what needs to be done tomorrow.

"We are going to need to be really good tomorrow to make sure we can stay in this content. With Jonny try to get him out as early as possible and get the game moving forward."

Play will resume tomorrow at 10 am live from the SCG.