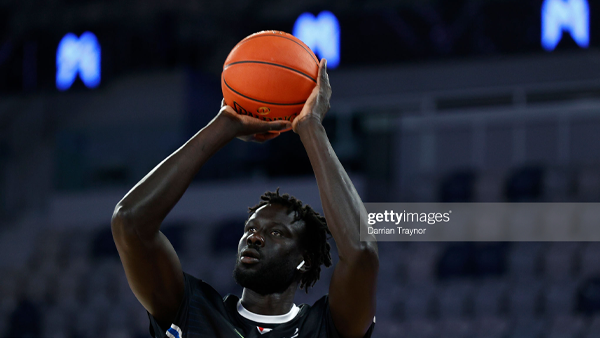 While Melbourne United centre Jo Lual-Acuil kept hushed regarding being on the NBA's radar, coach Dean Vickerman has seen his want to improve and develop more to create greater chances of success.

While Melbourne United centre Jo Lual-Acuil kept hushed regarding being on the NBA's radar, coach Dean Vickerman has seen his want to improve and develop more to create greater chances of success.

Since signing with Melbourne United three years ago, centre Jo Lual-Acuil has continued to progress as both a player and a leader according to coach Dean Vickerman, who believes it's a factor as to why he's being heavily scouted by NBA representatives.

Off the back of a what's been labelled a career-best game for Lual-Acuil where he posted a double-double, scoring 26 points along with 21 rebounds in Melbourne United's 94-85 loss to the Tasmania JackJumpers, coupled by another double-double (23 points, 12 rebounds) against the Adelaide 36ers the game before, it's got him on the radar of NBA scouts.

Lual-Acuil's rise through the NBL has been a three-year journey, and he's got better as the seasons go on, improving on almost every line of his output and statistics. The 27-year-old also won the league's Sixth Man of the Year award last season as he was a key component in United's NBL21 championship winning season.

However, speaking to media on Thursday, the South Sudanese-born player was unwilling to give in to the hype around his dominant performances and output, instead of focusing on how he can deliver success to a Melbourne United outfit who's looking for back-to-back championships.

"Filling up the stats sheet is not really a thing that I go into a game thinking about," he said.

"[I] go into it thinking about my assignments and the game plan, what we need to do and hopefully as a team, we get a win. My stats are very irrelevant, as long as the team wins."

With the rumblings about a potential move to the NBA at the conclusion of the current NBL season, the 211cm centre didn't feel like commenting on the reports, such is his desire to focus on his performance with Melbourne United before addressing any future plans. Previously, he went undrafted in the 2018 NBA draft.

"I'm really just focused on the present," he stated.

"Like I said, stats are irrelevant, what anybody's saying outside of the team is irrelevant to me. I get my confidence from my teammates and my coaching staff and that's how I go from there."

While Lual-Acuil himself wasn't willing to give in to any external pressure of what outsiders were saying or who was looking at him closely outside of the club, his coach had plenty to offer about his star centre's prospects and his development.

After the past two games, Vickerman believes that Lual-Acuil's ability to work both ends of the floor proves his capability to stand up in big moments, and in big games when both offence and defence need to be executed well, especially as Melbourne United came up against last year's runners-up, the Perth Wildcats.

"It's been an amazing development here and we're so proud of him and our staff about how they've helped him get to the level that he's at right now over the three-year journey," Vickerman told media.

"When we wanted a Jock Landale replacement, [we were] so fortunate to have one in our building and to go from the sixth man to a starter and take on that role and now take on a major scoring role and be regarded as one of the best centres in our league right now. He keeps looking forward [to] what's next, [asking himself] 'Can I be an All-Star five in this league?', 'Can I take the jump to the NBA?'.

"When he played the [NBL x] NBA games a couple of seasons ago and we started him at power forward, he looked like he belonged in that area. There's gonna be a lot of scouts looking at different players in our league and they'll start focusing on him a little bit more."

More so than his coverage on the court, to Vickerman, Lual-Acuil has also demonstrated an ability to ask questions of himself and wants feedback about how he can improve his game and get better, an element that the coach says is reflective of his leadership qualities.

"I think, he wants critical feedback from me, he wants to know where he can better," Vickerman said.

"We showed [him] areas in that game (against Tasmania) where he plays 35 [minutes], that these are the areas that you drop off a little bit when you play that many minutes [and asking] 'Can you sustain [it]?', 'How long can you sustain the sprints and the things that we need you to do?'.

"So, he knows we're a better team having Ariel [Hukporti] play more minutes and he plays at a higher level as well but y'know, he held those minutes down outstandingly.

"What I loved about Jo was, he was a captain of Baylor [University] which is a huge thing to captain that kind of team in college and we always believed that his leadership would grow with us.

"But now, you get to a point where you're being a dominant player in our league, he's become an even better leader where he's critical of himself to the point that other players are like 'Wow, you're playing so well but you're still seeing the areas of improvement and talk about the things you didn't do well and I think that leadership has really grown."

Melbourne United host the Perth Wildcats to John Cain Arena on Saturday, February 12 from 8 pm, in what is an NBL21 Grand Final rematch.