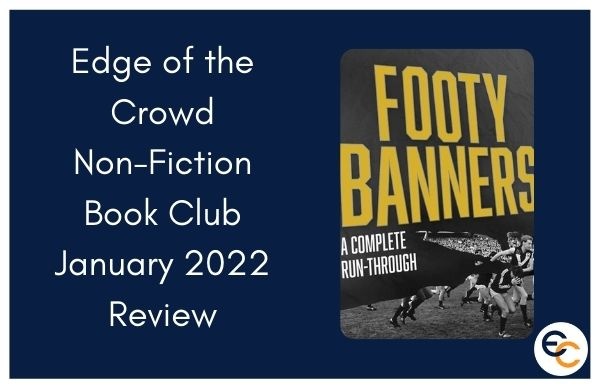 As January comes to an end we review our non-fiction book for the month of January which was Footy Banners by Leigh Meyrick and Matthew Hagias.

As January comes to an end we review our non-fiction book for the month of January which was Footy Banners by Leigh Meyrick and Matthew Hagias.

Footy Banners - A complete run through by Leigh Meyrick and Matthew Hagias was our non-fiction pick for the Edge of the Crowd's Book Club for January and it was exactly the tonic for this time of year.

Meyrick has long been a footy tragic and was involved in the GWS Giants for an extended period. Hagias describes himself as a football romantic, and for a stint, wrote the texts that sat on the GWS Giants footy banners.

It seems that relationship blossomed, as the two found a shared love for footy stories, and for one of the unique traditions that stems from Aussie Rules football.

After two lean years with banner appearances, it seems that banners are on the return this season, and the book captures the essence that has been missing while Covid-19 restrictions have prevented banners from being flown.

The Melbourne Demons and Western Bulldogs run through their respective banners during Round 1 of the 2022 AFLW Season. (Images: Elly Mcnerney)

Footy Banners captures its dual purpose beautifully. On one hand, it has the images, the reminders of great banners of past years, both the actual photographs and stylised versions of the best banner slogans.

On the other hand, it tells the story of how and why they became so important to football, and how they became a representation of how non-players and coaches are involved in the game.

'Banners have always been a reflection of the fans themselves and have evolved with our cultural landscape. While there have been some deplorable run-throughs in the psat, today's socially aware banners represent a grat step forward in the effort to unite, rather than divide our community.'

Some of the highlights of the history of footy banners involve comical moments, like Kevin Bartlett tripping over a special banner in honour of his 400th game, and the chaos that happened in the moments leading up to that. Some involve touching moments, like banners for Pride Round, Sir Doug Nicholls Round, or in remembrance of Phil Walsh.

Footy Bannerswas a great choice of book, as a reminder of that journey. It cuts back to the football moments that live in so many fans minds, and that has affected the relationship that footy fans have had with the game over the years.

Whether the stories told, or simply the photos connect with the reader, every football fan should have a rifle through the pages, and be reminded of just how great the national game is.

And for every fan that gets out to a game this year, seeing the banner will be a glimpse, an insight into all of the history of football, and the effort that people go to every week to make sure that the game is ready to be played.

It is a great choice for football fans, young and old. It is worth a read now, in the summer, or sometime before the season, as an inspiration for the love of football.

Leigh Meyrick and Matthew Hagias have run through to the essence of football and put it up for all the fans to see, as the game runs through.