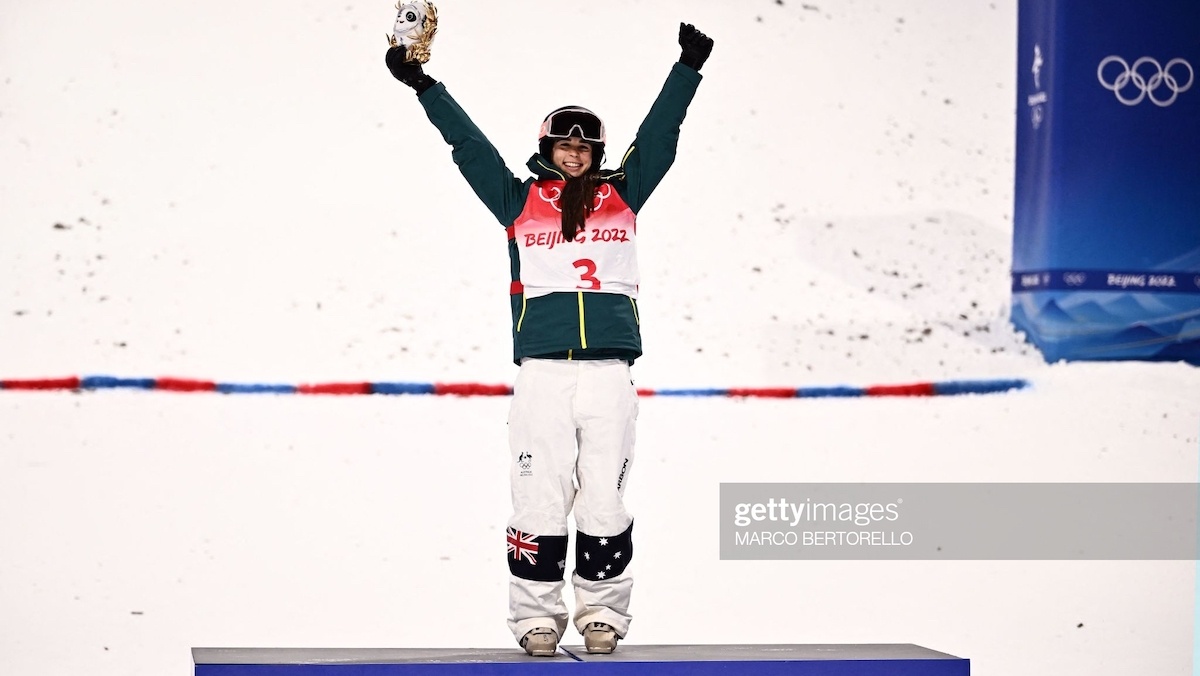 After dominating the competition at Beijing 2022, Anthony became the Australian first female to medal in the moguls.

She set the pace in her first qualifying run on Thursday evening and was flawless through to the Super Final. It's a challenging task when each finals run is a cleared score sheet, but it didn't matter for Anthony, who continued to put herself at the top of the standings with each run.

In the Super Final, she won gold with a score of 83.09, ahead of American Jaelin Kauf who won Silver and ROC teenager Anastasiia Smirnova, who took home the Bronze.

Speaking to the Channel 7 broadcast team after the special victory, Anthony had no words to describe what she had just achieved.

"It's really incredible to know that all the hard work I've been putting to my whole skiing career is really paying off.

In the first Final, Anthony watched on as her fellow Australians put down clean runs that unfortunately didn’t score high enough to progress. Britt Cox finished 14th, while Sophie Ash made the first final, placing 16th on debut.

Japanese moguler Anri Kawamura moved into the lead with a fast and impressive run, scoring 80.72.

It was a jostle for second place, and penultimate skier, Frenchwoman Perrine Laffont, took over the position with a score of 79.86.

Anthony, going last after she qualified first with 83.75, was clean and fast through the moguls course.

Down in 27.70 seconds, and with an impressive air score of 17.53, Anthony moved into top position for Final Two.

It was time for the second Final, the top 12 competing for the six spots in the Super Final.

Canadian Sofiane Gagnon fell in her second run, while Kazakhstan’s Yuliya Galysheva missed the edge of a mogul and would not progress with her low score either.

American Kai Owens recovered from a form break into the bottom air, but made it through the course and still scored 65.49, but would not move into the top six.

Fellow American Jaelin Kauf was fast, catapulting into first with her score of 80.12 and qualifying for the Super Final.

The reigning champion Laffont had a minor break going into the bottom air. A successful landing and a speedy run gave a score of 77.62.

A controlled run from Kawamura eased her into the Super Final, 78.84 qualifying her for the final in third position.

Anthony, going down last in Final Two, wasn’t as clean off the top air as she was in her first run, but she cleaned it up through the middle turns, before a slight break going into the bottom air.

A backflip with the mute grab was enough to steal top qualifying position, with a score of 81.29.

BEIJING 2022 DAY 1 ON SNOW: ELATION AND HEARTACHE FOR AUSSIES ON THE MOGULS

In the Super Final, American Olivia Giaccio was a little on the slow side and only managed 75.61.

Pyeongchang gold medallist Laffont went fast through the middle section, but slowed down into the bottom air. She was still happy with her run, despite it being uncharacteristically off her best and scored 77.36.

Smirnova went third with a strong 360 mute grab off the top air, which set her up for a solid run that took her to the top of the standings with 77.72.

Kawamura turned beautifully, but her exit out of the bottom air was not clean enough for the judges who marked her down to a 77.12.

The fastest competitor of the day, going down in 26.37, Kauf moved into the gold medal position with 80.28 points and set the challenge for Anthony.

But the Australian was cool under pressure and did not falter at all.

A clean run into the top air, which she exited expertly, ran into a clean moguls section through the middle, before she landed the bottom air and took home the gold with one of the best runs of the competition.

It was a somewhat nervous wait to have it confirmed, but Anthony became Olympic Champion with an incredible 83.09 and maintained her position as the best skier on the Genting Snow Park course in the Women’s Moguls.

There were stunning scenes of Anthony hugging her teammate Cox, who had tears of pride in her eyes as her good friend became Australia’s first female Moguls Olympic Champion.

Alisa Camplin was similarly emotional, as the Aerials-skier-turned-coach welcomed one of her athletes into the exclusive club of Australian Winter Olympic gold medallists.

Camplin herself became the second member when she won Gold in the Aerials in Salt Lake City 2002, just days after Australia's first Olympic Champion Steven Bradbury some 20 years ago.

It was a different experience for Anthony in Beijing, coming in as one of the top contenders and, after the first qualifying run, solidifying her position as a favourite to take home Gold.

Far from her fourth place finish as an unknown teenager at Pyeongchang four years earlier.

Speaking about how she kept her mind focussed the whole time, Anthony spoke of her team and the work they've done - admitting she had no idea of the scores that had gone before her, or even her score, only noting the number one next to her name at the end of the third run.

"That's a real testament to the work myself and the team I've got around me have put in the last four years, building some really solid processes to follow and it really hasn't been easy, but I think that I'm a much better athlete and also a much better person because of it.

"And I think that that's the best think that's come out of this...

"My mind was thinking to what the outcome could be, and then I'm like 'no, hang on, come back, this is what you need to do right now, this is what you can control' and just flicking between that the whole time.

"As much as you don't want to go thinking about results, it happens, it happens to everyone and its how you manage that, that really pays off."