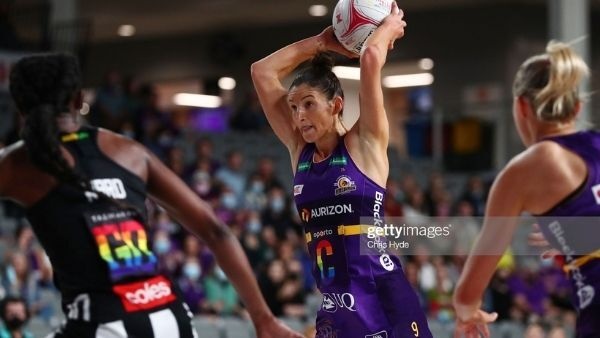 'It’s an absolute honour to captain this club': Kim Ravaillion on new role

The Queensland Firebirds announced today that Kim Ravaillion will captain the club from 2022 and beyond with Lara Dunkley named as vice-captain.

'It’s an absolute honour to captain this club': Kim Ravaillion on new role

The Queensland Firebirds announced today that Kim Ravaillion will captain the club from 2022 and beyond with Lara Dunkley named as vice-captain.

Queensland Firebirds star Kim Ravaillion is adding captain to an already impressive resume with the 28-year-old being named the captain of the Firebirds afterGabi Simpsonstepped down earlier in the week.

Voted in by her teammates, Ravaillion said it's an honour to lead the Firebirds and to lead alongside new vice-captain Lara Dunkley.

"It’s an absolute honour to captain this club and I am so grateful that the girls picked me to be their captain and I just can’t’ wait to get out there in 2022 and show the amazing stuff we’ve been working on as a group," Ravaillion said.

"The feeling in the group at the moment is a feeling I’ve felt before which is very exciting and to do it with Lara [Dunkley] as my vice is icing on the cake."

The feeling around the club is something that Ravaillion said she hasn't felt since 2015 and 2016, which were the years the Firebirds famously went back-to-back in winning the then-ANZ Championship.

"It’s that feeling of winning and the girls really wanting to be there and the buy in of the culture we’ve created," she stated.

"Megz (Megan Anderson) Larz (Lara Dunkley), myself and all the girls have done a lot of hard work soul searching and we’ve come up some really core values for this group and the club and we’re all living by it.

"We’re having genuine conversations. That’s that feeling that you want in an environment, it just feels really good so we just need to get out there and put it into action."

While Ravaillion and Dunkley may be in the formal leadership roles, Ravaillion said she's privileged to be a part of a team with so many leaders.

"I’m very lucky that I’ve got a team full of leaders and there is so much experience in the group and I’m not alone" she told.

"I feel like I’ve got obviously Gabi [Simpson] who was in the role before me but I’ve got Larz right next to me so the pressure is really on all of us. I mean I’ve got to wear it but the girls will give me their all and I’m just excited for the opportunity to get out there. It’s not just me doing it it’s all of us."

It was a stunning comeback to Super Netball for Ravaillion who missed the 2020 season before relocating back to Queensland with her daughter Georgie to continue her Super Netball career.

"I mean I’ve had one hell of a journey but I guess everyone has their own story, mine is just out there in the media a bit" she mentioned.

"I’m so lucky to have such a supportive partner in Adam who allowed me to get back out there and chase my dreams and to do that in front of my daughter is very special and something I aspire all these girls to chase their goals and dreams and all the younger girls coming through the pathway."

Since coming back to the Firebirds last year, Ravaillion has made a close friendship with Dunkley both on and off the court with Ravaillion saying she's happy to have Dunkley by her side.

"I think everything happens for a reason and I’m grateful that Larz is a really close friend of mine and  I get to do this leadership thing with Larz and I couldn’t think of anyone better to do it with", she said.

Dunkley echoed that sentiment saying it's a privilege to be named vice-captain of the Firebirds and work alongside Ravaillion.

"To be by Rav's (Kim Ravaillion) side, she’s an incredible athlete and person on and off the court and she’s been there and done it all and is still doing so.

"So to be there with her is an absolute honour but it isn’t about us, it’s about the team and we’ll do whatever it takes together and we have a goal we really want to achieve and we’re going to do everything that it takes."