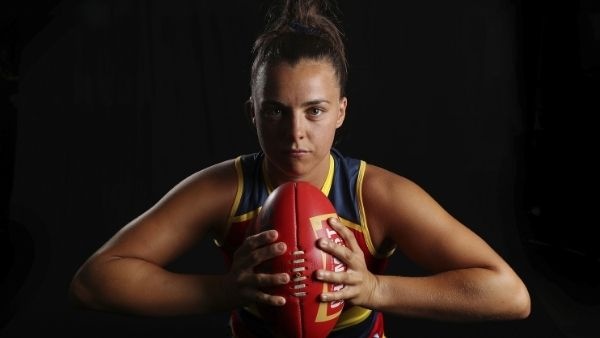 Ebony Marinoff is one of three AFLW players this weekend that will make history when she reaches her 50th game milestone against Collingwood on the weekend.

Ebony Marinoff is one of three AFLW players this weekend that will make history when she reaches her 50th game milestone against Collingwood on the weekend.

Ebony Marinoff is one of three AFLW players this weekend that will make history when she reaches her 50th game milestone against Collingwood on the weekend,just two weeks after becoming the first AFLW player to reach 1000 disposals.

Marinoff is a two-time premiership player with the Adelaide Crows and the Crows' first selection in the inaugural AFLW draft.

While it's an amazing individual achievement Marinoff said that it means a lot that all 50 games were in Crows colours.

"A very proud moment when I run out with the girls on Sunday. It's been a long journey six years I guess to get to this point. It's amazing to do it for such a special club that means so much to me."

Marinoff hasn't missed a game for Adelaide since debuting in the side's first ever AFLW match and while it's a special occasion she says it would have been nice for another inaugural Crow to join her.

"I was really hoping that Stevie [Stevie-Lee Thompson] would be joining me, we went into the season kind of like on par. We'd never missed a game and then unfortunately she missed with COVID protocols.

"It would have been cool to do that, with Stevie considering we've been playing from the inaugural year but I guess it's pretty cool to be one of the first given the fact that I've never missed a game.

"So the club has played in 49 games, as have I and we'll run out on Sunday for our 50th, myself as well as the club representing 50 games."

Marinoff will run out in her 50th game on the Crows fortress that is Norwood oval, with her friends, family and Crows faithful sure to pack out the stands.

"I feel like I'm very grateful that my 50th will be at home, I'll have so many friends and family be able to come watch. I'm glad it wasn't last week my mum and dad would be devastated because we weren't allowed into Perth.

"The Crows' support crew are the best in the business and a packed out Norwood Oval is hopefully what we get on Sunday."

HAWTHORN AFL SEASON PREVIEW- THE DAWN OF A NEW ERA

While the two premierships are a standout, there was one home and away match in 2017 that stands out as a highlight.

"I know it was five years ago, but it was Round Two in 2017, our inaugural year. We didn't know if we'd have a team and we played the Giants in Round One, we didn't really know where we were at as the Giants hadn't ever played in the Hampson-Hardeman Cup. It was kind of Melbourne and the Doggies who were going to be the teams to beat.

"I remember we were playing on a Friday night at Whitten Oval under lights, and we were travelling along the Westgate in Melbourne in absolute peak traffic we were so late to the game.

"Everyone was standing up on the bus needing to go to the toilet like it was just hectic to get to the ground. It [was] chaos and we just go out and we absolutely kill the doggies.

"Like I said they [the Bulldogs] were one of the premiership favourites and I knew from that game and it was round two that the girls were going to do special things in that first year.

While it's a special occasion, Marinoff still recognises that her side has a big task ahead of them, when they face Collingwood on Sunday.

"It's my 50th game and the girls and the club certainly got around me but I'm here to do a job and that is - help this team into finals.

"I think we're in finals now but we don't want to just make finals we really want to cement a top two spot.

"It's a pretty big clash and we've had some amazing games against Collingwood over the journey of AFLW.

"It's gonna be an amazing day but I just hope we get the four points and like I said really cement that top two spot and hopefully gain home finals."

The Crows will take on Collingwood on Sunday at Norwood Oval at 2:40pm local time in Marinoff's 50th AFLW game.