With the Olympics heating up the question is why we have not already received a reality tv show on ice dancers? 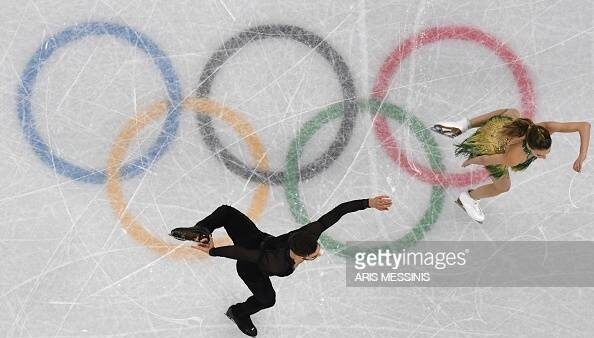 In the lead up to the Beijing 2022 Winter Olympics, the Olympic Committee has released a docuseries following the leading Ice Dance competitors as they prepare for the world stage. After having watched all 12 episodes of 'On Edge', I am left questioning why we have not already received a reality tv show on ice dancers.

Although the exact rules of the Ice Dance program remain hazy, I did learn the following:

Costuming is perhaps half the reason why I watch figure skating and, to my delight, seems to take up a significant amount of the ice dancers' preparation period prior to the Olympics.

The importance of costumes is introduced in the first episode, where we learn that Team France, Papadakis and Cizeron, missed out on gold in the 2018 Games because of a wardrobe malfunction. Their coach later refers to this incident as “traumatic.”

As the episodes progress, we see Madison Chock design her own costumes, and a wholesome clip of Madison Hubbell’s mother lugging a sewing machine on a flight so she can continue her work as the team’s seamstress.

I have also never seen so many sheer shirts on men. Although not an obvious choice for a winter sport, the ice dancers do make a strong argument for the sheer shirt as sportswear which I hope catches on amongst the other winter sports.

No one ever says no to any ideas in Ice Dance

In the words of one of the coaches, “you are always putting on a show” in Ice Dance, and it is truly a show where anything goes.

As the Ice Dance competition is divided into the Rhythm Dance and the Free Dance, there is no limit to the range of music, dance styles, and costuming (so long as it remains respectable and non-offensive). For the 2021-2022 season, we have an ‘Alien and Astronaut’ program, a Billie Eilish program, and a Zorro program. And why not?

They all beat another program set to Ravel’s Boléro (of which we will already see too much of at the Olympics).

A personal favourite is Papadakis/Cizeron’s program that incorporates waacking-inspired choreography. Emerging from the LGBTIQA+ community in the 1970s, the street dance style of waacking is not what I thought I would see in Ice Dance, but boy am I glad it made an appearance.

Team France not only wore my favourite combination of red, velvet and sheer mesh for their costumes, but their program was also a cross-over of sport and culture that could only be possible in Ice Dance. What will they be inspired by next? Absolutely no one knows, least of all the dancers.

They say it takes a village to raise a child, and in the case of Ice Dance, it takes experts across almost every discipline to produce a program worthy of Olympic gold.

Throughout the episodes, we see professional hip-hop, contemporary and ballroom dancers lend their skills and techniques to finessing Ice Dance programs.

There are also music designers who draw together the diverse music choices to create a cohesive soundtrack, with the added special effects of sword fighting for Smart/Diaz’s Zorro program. Ice Dance sure does keep a lot of people in business.

As a result of the absolute confluence of disciplines, there is a beautifully artistic and emotive synergy to Ice Dance that I originally missed from my casual viewing of the sport.

They are ‘Stronger Together’

It would not be a docuseries produced by the Olympic Committee if the Olympic spirit did not make an appearance. With the theme of the 2022 Beijing Olympic being ‘Stronger Together,' Ice Dance certainly shows the benefits of friendship and collaboration.

The friendships between the couples is an endearing aspect of the series, demonstrating the solidarity of the Ice Dance competition. Chock remarks “we love that [Madison Hubbell/Zachary Donohue] are our rivals,” as each couple have a deep appreciation and respect for each other, which elevates their relationships.

As the featured couples all train together in Montreal, they are understandably very close. So close in fact, that Laurence Fournier-Beaudry and Nikolaj Sorensen are romantic as well as sporting partners, Team USA’s Madison Hubbell is engaged to Team Spain’s Adrian Diaz, and Madison Chock and Evan Bates have been dating since 2017. Beyond the romantic pairings, there are layers of increasingly complex partnering that would take days to unravel. What other sport can claim such entanglements?

If ‘On Edge’ has raised any questions of your own, you can watch the Ice Dance Ryhtym Dance on Saturday 12 February, and the Free Dance on Monday 14 February.