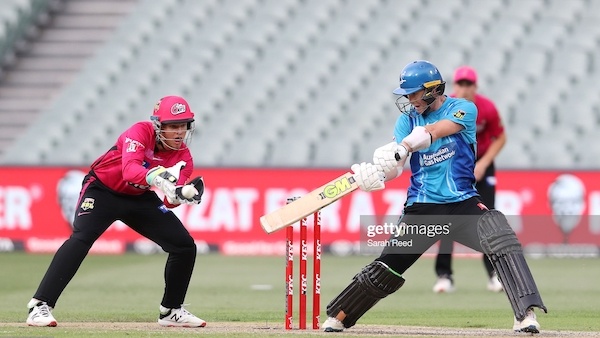 The Adelaide Strikers continue their unbeaten run with Ian Cockbain in the side, the English batter smashing them into the finals with a win over the Sydney Sixers

The Adelaide Strikers continue their unbeaten run with Ian Cockbain in the side, the English batter smashing them into the finals with a win over the Sydney Sixers

The Adelaide Strikers continue their unbeaten run with Ian Cockbain in the side, the English batter smashing them into the finals with a win over the Sydney Sixers.

Cockbain was signed by the Strikers just four days ago, coming across as a replacement player, he made 71 runs with the bat in the eight wicket win.

He is so new to the side that Matt Renshaw admitted post-match that he hasn't "really met him",

"That’s the first time I’ve batted with him, I met him a couple of days ago when I got out [of isolation].

“He seems like a really ripper fella, coming over at pretty short notice from Melbourne to play for us - he probably wasn’t expecting that, but he’s offered a lot and his innings today probably pays for itself.”

The Englishman has looked comfortable out in the middle, despite playing levels below the Big Bash in Melbourne.

“He’s probably got nothing to lose, he’s coming over here and playing with a lot of freedom - feels like that when I was batting with him today, but he looks like he is playing with freedom, he’s watching the ball and hitting the ball, he’s doing really well,” Renshaw said.

There was one change to the Strikers side, with Henry Hunt replacing Matt Short who has a low-grade quad strain, while the Sixers rested Steve O'Keefe, who Moises Henriques admitted post-match was rushed to return in the previous match.

Batting first, the Sixers opening partnership ended at 1/44. Fawad Ahmed broke through, picking up the wicket of Josh Philippe. However, the bowler didn't realise he had in fact taken the top of the off-stump and launched into an appeal, either way Philippe was sent back to the dugout.

Renshaw took the wicket of Henriques bowled, before Fawad was back to take a second and third wicket in consecutive ball. Unfortunately, the hat-trick ball was unsuccessful.

In the opening over of the Power Surge, the Sixers, who were having a tough run, made just six runs.

However, it wasn't long before the momentum swung in the other direction.

Renshaw attempted to take the catch to remove Christian, but he was too close to the boundary and in trying to save runs, he ended up dropping the ball on the rope for six.

Henry Hunt tried to do something similar but was also caught too close to the rope. He thought he'd thrown the ball up, hopped outside the rope and then back in before holding onto the catch. However, on review, the TV umpire confirmed Hunt had stepped on the rope in the act and Avendano was safe.

Both set batters were lucky to stay at the crease and they ran with the opportunity, whacking maximums as the Strikers bowling fell apart.

Finally, after Avendano and Christian had had some fun, Thornton found a wicket, dismissing Christian for 22, Cockbain took the catch in the outfield.

Avendano hit his half-century with a six, but his innings was ended a short while later by Siddle and Cockbain picked up another catch.

Siddle then bowled Sean Abbott before he made an impact, to bring up a second hat-trick opportunity for a Strikers bowler this match. He was also unsuccessful. The Sixers finished 7/161 off their 20 overs, leaving a few runs out there.

In the absence of Matt Short, Renshaw opened the batting with Henry Hunt.

Renshaw was teeing off early, seeing the ball beautifully and finding the boundary with ease. Post-match he seemed pleased with how he saw the ball in the middle - "except in the field - [he] didn’t really see that one too well."

He said his Covid-19 symptoms were largely just fatigue, which made returning to exercise difficult.

“I just got really cooked, really quickly. I tried to do some fitness stuff in the hotel, but every time I seemed to try and do it, I got cooked and wanted to lie down."

Otherwise, the symptoms weren't too bad for the batter, he has just had trouble adjusting to the outside light after a week in a hotel room.

“The big thing I found was [with] my eyes, because I couldn’t really go outside except for the two by one balcony, so my eyes were the biggest thing - they’re still adjusting. It’s quite tough to adjust into the light.”

Hunt was dismissed by Dwarshuis for 15, who became the fifth man to 100 Big Bash wickets.

Adelaide secured the Bash Boost point in the seventh over with a six smashed by Cockbain into the stands.

Renshaw and Cockbain pulled together a quick 50 run partnership, and then Renshaw ticked off the half-century milestone from just 30 balls. But he lasted just one more delivery - bowled by Hayden Kerr.

Cockbain also raced his way to a half-century off the same number of deliveries and finished with 71, as the partnership was solidified with Jono Wells and they guided Adelaide to victory.

The Sixers were unable to take regular wickets and their 161 was too short for the win tonight.

Henriques lamented the runs left out in the middle but said he never gave up hope with full confidence in his bowling unit.

"I mean there’s always a team performance, it’s never batters verse bowlers, but I think we definitely could have [scored more].

"It was a really good wicket, it was going to be very hard work for our bowlers to defend that, but having said that I still thought with the quality of our bowlers, that we were still a chance.

"From then they just continued with their positive mindset, really… they were proactive with the risk they took in the Powerplay and it was pretty hard to defend from there because of how docile the wicket was.

With both sides locked in for Finals, and the Ashes series wrapping up last night, the question becomes can - or will - any Test players make their way back into the squads?

Cricket Australia has not announced the release of any players, however, they themselves seem keen to play a role in the BBL|11 Finals.

Henriques thinks the Sixers may benefit from the addition of Nathan Lyon, while the Strikers could potentially welcome back Travis Head and Alex Carey.

"He always says that he loves playing for us and he enjoys coming back.

“I’m pretty sure he’ll be back available for either next game in Brisbane or the finals, I don’t know exactly how that’s looking - he’s just played five Test matches pretty close together... and he’s been in a hard bubble as well.”

Meanwhile, Renshaw was also unsure about when the players would be available, but it would create a selection headache for the coaches should they be released and wish to play.

“Depending on who comes back, whether we see Trav (Travis Head) or Kez (Alex Carey) come back, it’s sort of the unknown at the moment, but feels like we’re really gelling as a group and we’ve got a good group of young guys coming through as well...”

“Trav’s been playing the Ashes like a Twenty20, [it'd be] nice to welcome him back and Kez as well - not envious at all of the selectors.

"It’s going to be interesting to see how they go with it, but it’s just about if you get the game to step up.”

The Strikers now wait on their first Final opponent, while the Sixers travel to Brisbane for one more regular season match against the Heat.