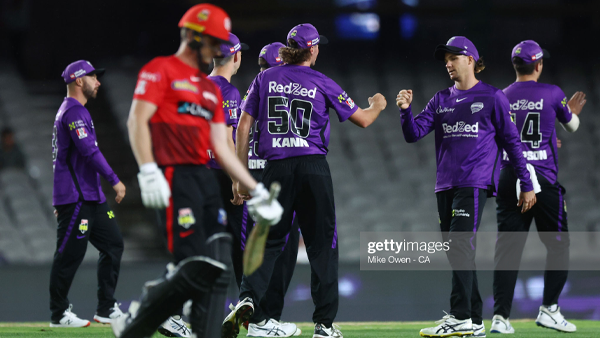 The Hobart Hurricanes have qualified for the BBL|11 finals with a six-run win over the Melbourne Renegades who lost 4/15 in the closing stages of the run chase.

The Hobart Hurricanes have qualified for the BBL|11 finals with a six-run win over the Melbourne Renegades who lost 4/15 in the closing stages of the run chase.

The Melbourne Renegades made five changes to their lineup and utilised seven bowlers but it wasn't enough as they went down to the finals-bound Hobart Hurricanes by six runs.

Young US-based batter Unmukt Chand made his long-awaited debut for the Renegades, becoming the first Indian player to appear in the BBL, however, his impact was minute as the side lost in a close contest. However, it was a positive result for the Hurricanes as the victory secured their spot in this season's finals series.

Post-game, Hobart captain Matthew Wade, who starred with the bat, said the need to produce crucial victories to gain better ladder positions were challenging, but welcomed his team's efforts in achieving the feat with the performance tonight.

"We're doing what we can with the ball, it's challenging at times," Wade said toFox Cricket.

"We've got a lot of all-rounders, we're missing quite a lot of bowlers, like a lot of other teams are, so it's always going to be a challenge. We need to get a few runs, and get ourselves in the game but our starts... we've been pretty much whacked all over the park so we've dragged it back nicely and [I'm] just happy we won."

Josh Lalor started well with the ball for the Renegades, keeping a tight line to Caleb Jewel and Ben McDermott, the former getting the first boundary of the contest off Zak Evans in the second over, otherwise, kept a tight line too.

However, the two opening bowlers for the Renegades combined for the first wicket, that of McDermott (three off seven), a full-length slower ball that he looked to heave down the ground, but Evans made up plenty of ground from mid-on, running back to take a catch with outstretched hands, off of Lalor's bowling.

Matthew Wade's presence in the middle proved beneficial early on for the Hurricanes, hitting a couple of fours in consecutive overs, as he and Jewell began hitting even bigger as the side passed 50 runs. The 50-run partnership between Jewell and Wade also came up in the ninth over, with the final over before drinks seeing 13 runs added to the Hurricanes lineup.

Jewell (35 off 28) fell five balls after the break to Cameron Boyce, top-edging a sweep shot to deep midwicket where Lalor was waiting for the catch as spin once again proved helpful for the Renegades in slowing the run rate.

Wade (48 off 39) continued to edge closer to a half-century but came undone two runs short when he mistimed a scoop shot and found Zahir Khan at fine leg as Evans picked up his second wicket.

With two relatively new batters at the crease, D'Arcy Short and Jordan Thompson began to see the ball clearly and find the boundary, taking advantage of the power surge but Thompson (nine off four) was caught behind off Boyce's bowling moments after the conclusion of the two-over period.

Short and newcomer to the crease, Tim David started trading sixes, seeing who could hit the bigger maximum, and trading blows to the Renegades bowlers.

Although Short (37 off 22) got out, caught by Shaun Marsh at midwicket for Lalor's second wicket, the duo of Short and David (46* off 20) accounted for 62 runs off the final four overs to finish the innings 5/182.

It was a brilliant first couple of overs of the chase for the Renegades with James Seymour and Aaron Finch heading into the middle, where the former started hitting boundaries at a blistering pace, hitting four fours and one six as he faced 11 of the first 12 deliveries.

Finch then teed off during the third over of the innings, bowled by Sandeep Lamichhane, getting 12 runs off it, including a four, before unleashing a six towards deep midwicket. Despite Thompson's best efforts on the rope, it was awarded a maximum, one that became Finch's 100th six in his BBL career to be just the fourth player to achieve the feat in W/BBL history.

Seymour was the first wicket to fall for the Renegades, caught by Joshua Kann at cover in an attempt that was close to the ground, after hitting a full delivery from Tom Rogers. Shaun Marsh came to the crease and continued the boundaries as the team ended the powerplay 1/43 - the second-best powerplay score of BBL|11.

The Hurricanes were able to settle things and restrict runs to their opponents, with the three overs following the powerplay yielding three, two, and three runs throughout the fifth to seventh overs respectively as spin played a large part of the runs drying up.

The required run-rate had climbed to over 10 an over, but with Finch and Marsh set at the crease, both batters were keen to strike hard, and fast, as the midway point approached. In amongst some handy overs leading up to the drinks break, the 50-run partnership was brought up, lead mostly by Marsh hitting a six, and two fours off Kann, with Finch also finding the other side of the rope.

Finch and Marsh picked up where they left off after the break, continuing to hit boundaries, with at least one coming in each over as they cashed in with the hitting prowess they were exhibiting and took the power surge.

After taking Rogers for 12 runs in the first over of the power surge - where Finch brought up his half-century off 37 balls with a four down the ground -, Lamichhane bowled the second and although he was hit for four by Marsh - who also brought up his half-century, off 36 balls, and the pair's 100-run partnership -, the Nepalese spinner got him out, caught by David at backward point.

Finch continued to punish the Hobart bowling lineup, cashing in on any ball that looked good to hit towards the boundary, and with Chand(six off eight) entering the middle, he needed some time to get in but eventually departed in the 18th over, caught by Jewell off the bowling of Lamichhane.

Chand's wicket was the start of a collapse by the Renegades who would lose 4/15, and although Finch (75 off 52) tried to battle on, he and Jonathan Merlo (zero off one) fell in consecutive Rogers deliveries, the hat-trick unable to be completed.

Needing 15 runs off the final over, it was over to Will Sutherland (six off four) and Sam Harper (three not out off three) to get a result for the Renegades, however, Riley Meredith bowled well, and despite needing a six to take the game to a super over, Sutherland was caught by Wade off the last ball of the match, confirming the result.

Both teams still have one more regular-season game of BBL|11 to play, with the Melbourne Renegades taking on the Sydney Thunder at the MCG on Wednesday, January 19 from 4:10 pm AEST, while the Hobart Hurricanes face the Melbourne Stars immediately after, forming a doubleheader, from 7:50 pm.