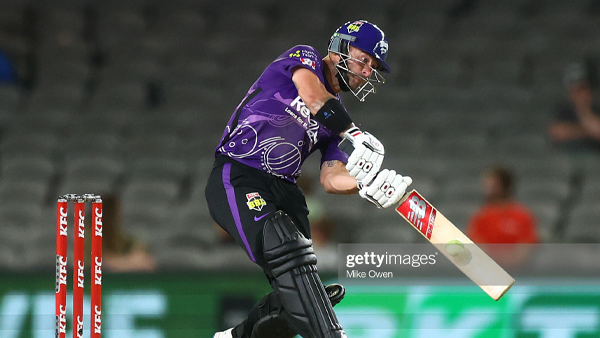 The Hobart Hurricanes held on for a nail-biting nine-run victory over the Sydney Thunder, thanks to Matthew Wade's return.

The Hobart Hurricanes held on for a nail-biting nine-run victory over the Sydney Thunder, thanks to Matthew Wade's return.

In a top-four clashthat had plenty of momentum swings, the Hobart Hurricanes completed a nine-run win over the Sydney Thunder at Marvel Stadium, complemented by the return of captain Matthew Wade.

It took almost two overs for Hobart's openers, Caleb Jewell and Ben McDermott to get going, with dot balls and ones taking up most of that opening period, before the former connected on a Gurinder Sandhu short ball which found a top edge to backward square for four.

McDermott (18 off 15) would be the first casualty of the contest when he found Tanveer Sangha in the gully off the bowling of Daniel Sams.

Jewell celebrated his half-century off 31 balls with a full-toss six over square leg from Sandhu's third over, however, the seamer would get his revenge the next ball, the batter slicing the ball to Oliver Davies who took the catch at backward point.

D'Arcy Short entered the middle and immediately made his presence felt, cutting a wide Sandhu delivery for four, to backward point. However, he was hampered down for the next two balls, before Short departed on the final ball of the over - a slower ball that caught the edge of the bat, caught by Baxter Holt.

The inclusion of Wade back into the side proved to be showing his importance as he brought up his half-century off 33 balls in the 15th over, continuing to find the boundary as he would be the experienced batter at the crease.

The start of the 16th over saw the Thunder take two wickets in two balls, firstly seeing Tanveer Sangha have Tim David (three off four) caught behind, before Peter Handscomb (one from one) got himself run out as he looked to run two, but came up short.

Wickets kept tumbling around Wade as Jordan Thompson (two from three) fell cheaply too, bowled by Mohammad Hasnain as the Hurricanes captain needed to wrestle back control as the side elected to take the power surge.

The power surge began with a four to Wade, lofting his shots that cleared the infield circle, as x-factor sub Mitchell Owen got in on the boundary-hitting action too. In the second over of the power surge, Wade launched a six into the second level of Marvel Stadium, with the period yielding 23 runs in total ahead of the final over, ending the innings 6/177.

The Thunder was cruising in reply, and despite Matthew Gilkes (one from four) departing in the first over, caught by Tim David at midwicket off the bowling of Riley Meredith, fellow opener Alex Hales and first-drop Jason Sangha launched some huge hits at Marvel Stadium as the Thunder remained ahead of its opposition early.

A quickfire 38 off 17 from Hales helped the score climb high, including taking Tim David for 20 runs - five fours - either side of the wicket, in the second over of the encounter.

Sangha got into the boundary hitting too, finding the rope three times in Tom Rogers' first over - the third of the innings. The following over, Hales, back on strike, picked up where he left off against, this time against Riley Meredith, taking the fast bowler for 16 runs, starting off with a six, and two fours to end the over to end the powerplay at 1/56 - the best of BBL|11 thus far.

Sangha took Thompson for six over deep midwicket inside the fifth over as both batters looked damaging, however, the pacer got the wicket of Hales, slicing a delivery to Rogers at backward point, flashing at a wide-pitched ball.

Daniel Sams was elevated to number four as he became the destructive batter, hitting a couple of boundaries as his fellow batter, Sangha's runs dried up, eventually going for 31 off 19.

Despite the wickets, the Thunder was at 3/100 at the midway point, until the Hurricanes claimed three wickets in four balls - two for Riley Meredith (who couldn't complete a hat-trick ball) and one for D'Arcy Short, which changed the momentum of the game and run chase.

A 45-run partnership between Baxter Holt (17 off 20) and Nathan McAndrew (30 off 20) tried hard to bring the elevated required run rate down but Sandeep Lamichhane had different ideas.

The Nepalese spinner took the wickets of both of the aforementioned batters, both within the 18th over, which almost guaranteed the result as Sandhu (11* from nine), Sangha (two from three) and Hasnain (four* from two) couldn't find the big hits to bring a positive result for the team.