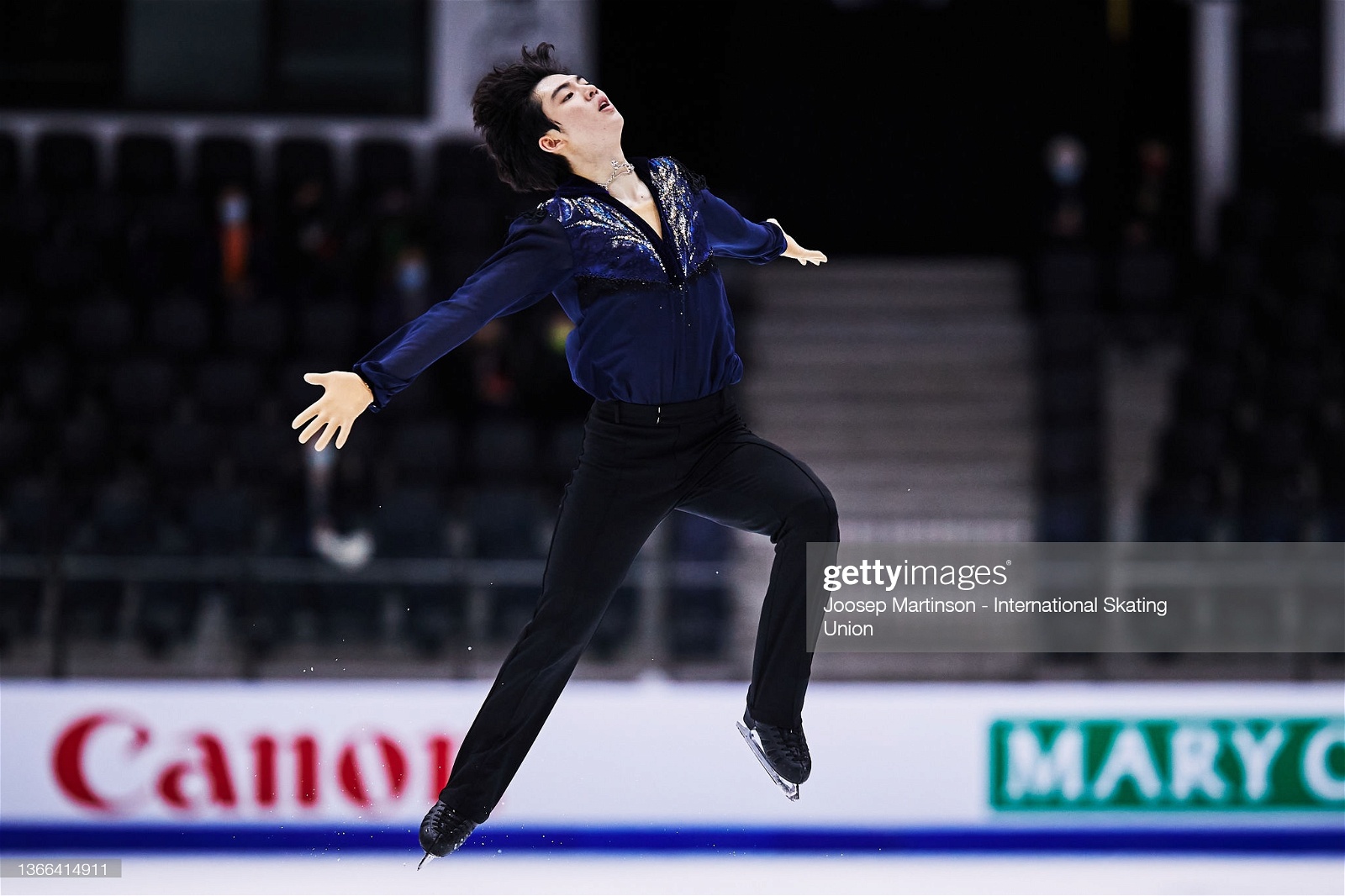 History is made at 2022 Four Continents Championship

History is made at 2022 Four Continents Championship

Thus far, only one positive COVID case has been discovered throughout the competition and did not lead to any skaters withdrawing from the event.

Junhwan Cha won his first senior international gold medal with two solid skates. Despite a fall on his opening quadruple toe loop and a shaky landing on his triple axel-double toe loop combo, a clean short program and high component scores kept him in the lead.

Cha becomes the first Korean man to medal at Four Continents, and only the second ever Korean skater to win gold. Yuna Kim previously won the title in the women's in 2009.

Such a result puts him in good standing heading into the Olympics in less than two weeks.

Tomono had the highest technical element scores in both programs, despite a shaky landing on the quadruple toe loop in his opening combination jump and a fall on the solo quad toe.

While Miura made similar jump errors to Cha and Tomono, some errors and lost levels on his spins and step sequences ultimately landed him in third.

After the short program, Australian Brendan Kerry was in reach of the podium in fourth place.

In the free skate, the technical content he performed varied vastly from his planned program content, requiring some quick thinking on his part to figure out how to maintain a high base value score. Ultimately he lost out on a few too many points through popping intended triple jumps into doubles, finishing eighth in the free skate and sixth overall.

His compatriots James Min and Jordan Dodds both had a few too many falls across both their programs, finishing in 15th and 16th respectively.

Mai Mihara won her second Four Continents title and her fourth Four Continents medal in Tallinn. An error on her final spin in the free skate was the only blip in either of her two programs.

On the podium with her are Korean skaters Haein Lee in silver, and Yelim Kim in bronze.

This is a particularly impressive result for Lee, given that Four Continents is only her second senior international competition of her career. She narrowly missed a spot on the Korean Olympic Team to Lee and Young You, who finished sixth after falling on all her axel jumps across her programs.

In the Australian face-off, Kailani Crane (12th) finished ahead of Victoria Alcantara (17th). Crane had a solid showing but was held back from finishing in the top 10 due to getting multiple edge and under rotation calls on her jumps.

Alcantara finished 16th in both her programs and earned a personal best score of 49.73 in the short program. A fall on her opening triple lutz and repeating the double toe loop a few too many times prevented her from finishing higher.

Audrey Lu/Misha Mitrofanov won gold with the cleanest performances in a pairs event full of errors. They had one of the few clean short programs in the competition, and a fall (Lu) on the side-by-side triple salchows was not enough to fall down the rankings.

Canadians Evelyn Walsh/Trent Michaud were second after the short program, with a low catch on their triple twist being the only blip in an otherwise clean skate with high levels. However a popped triple toe by Walsh during their side-by-side combo jump, as well as imperfect landings on the side-by-side triple salchow and throw triple loop, and shakiness on their final lift proved costly, dropping them into third place overall.

Emily Chan/Spencer Howe wound up with the silver medal. An underrotation by Chan on the side-by-side triple toe loops had them in third after the short program, and a fall and minor errors proved enough to rise up to second in the free skate.

Caroline Green/Michael Parsons continue the United States' gold medal run in the ice dance, winning the country its fourth consecutive title. They earned new personal best scores in the rhythm and free dance and earned over 200 in the combined total for the first time in their careers.

Kana Muramoto/Daisuke Takahashi made history in Tallinn, as their silver medal finish, it becomes the highest-ranking that a non-North American team has achieved at Four Continents since its establishment in 1999.

Muramoto previously held this record with her former partner Chris Reed, with whom she won a bronze medal in 2018.

Takahashi becomes the first athlete to medal in two different disciplines at Four Continents, having now podiumed in both the men and the ice dance.