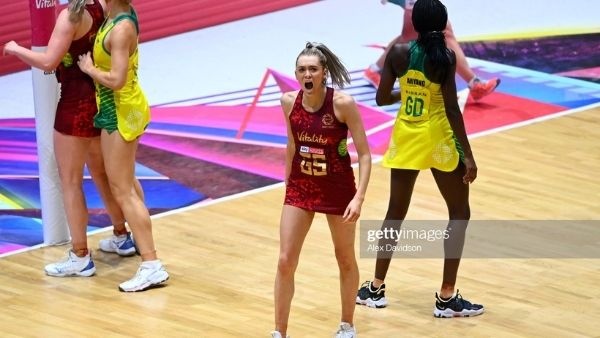 A final quarter surge led by Roses goaler Helen Housby saw the Roses and Diamonds draw 48 all in the final regulation match.

A final quarter surge led by Roses goaler Helen Housby saw the Roses and Diamonds draw 48 all in the final regulation match.

A last quarter comeback from the England Roses saw that game drawn 48 apiece after the Australian Diamonds led at the three changes it wasn't enough to stop the Roses from coming back from a six point deficit at three quarter time.

There were a few changes from Australia's last test, with Jamie-Lee Price getting her first start of the series in centre with Liz Watson coming straight back into wing attack in what was her 50th international cap.

After missing the second test Jo Weston returned goal defence and joined Swifts defender Sarah Klau back in goal keeper. Paige Hadley and Maddy Turner made way in the squad for Watson and Weston.

After a scrapping first couple of minutes, it was England's Eleanor Cardwell opening the account with a goal after Australia turned it over in the defensive end.

Cardwell continued her fine form after that first goal, scoring another two back to back goals on top of the game opener. It took a while for the Diamonds to kick into gear but after back to back goals to tie the score three a piece.

Sarah Klau was dominant in the first term having four intercepts and two deflections. It was a great first quarter from the Diamonds going into the first break with a three goal lead, 12-9

The combination of Wood and Koenen gave the England defenders a headache with the pair proving how strong of a combination they are.

Cardwell was strong in attack for the Roses having a 100 per cent goal accuracy going into the half time break.

Although the Diamonds were able to weather the storm of a Roses comeback going into the half time break with a 23-19 lead.

There were changes across the board for both sides coming out of the half time break, with Gretel Bueta and Sophie Garbin coming on at goal attack and goal shooter respectively. Sunday Aryang came on at goal defence and Geva Mentor came on in goal keeper for the Roses.

It was game on during the halfway mark of the third quarter with a long range shot from Cardwell tieing the score for the Roses.

Once Garbin and Bueta found their feet out on court they were able to put the foot on the gas and extend the Diamonds lead back out to four.

In an attempt to shake up England's attacking end, coach Jess Thirlby brought Sophie Drakeford-Lewis into wing attack with Laura Malcolm going into centre towards the end of the third quarter.

ROSES CONTINUE TO BE THE THORN IN THE SILVER FERNS’ SIDE

There was lots of work ahead going into the last for the Roses with the Diamonds holding a 38-32 advantage, but the Roses drew the first blow with a goal from Housby bringing the Diamonds' lead down to five.

Housby came to life in the last quarter helping the Roses bring back the Diamonds' lead to two points with coach Stacey Marinkovich bringing on Courtney Bruce into goal keeper to stop Housby's impact.

Cardwell tied the game back up with eight minutes to run in the last quarter with all the momentum going the way of the Roses.

From there it was goal-for-goal with both teams being extra careful with possession, until an intercept from Bruce was able to give the Diamonds some breathing room.

Thirlby had one last card up her sleeve bringing on Stacey Francis-Bayman into goal defence to be able to regain possession.

A missed shot from Garbin kept the door ajar for the Roses with Cardwell scoring down the other end but as she did in the 2018 Commonwealth Games final, it was Helen Housby that drew a dagger into the hearts of Australia drawing the game with two seconds to go.

Cardwell was player of the match, finishing the game with an 87 per cent shooting accuracy.

Although disappointed with the way the match ended, Australian coach Stacey Marinkovich said that Diamonds were here to play in these sort of matches.

"This is what we're over here to do, I guess is to be playing games but that sort of intensity, that sort of pressure and you know there's some vital lessons to be learned from it," Marinkovich said post match.

"So you know, going into tomorrow's game the girls will reflect on it, we'll see what we can do a bit better and then we'll retest what we're trying to put out on the court."

With the game being so close, captain Liz Watson said that there is a lot of learnings to come from the match.

"The beauty is we're back here tomorrow it's a really quick turnaround but really simplify it," Watson said post match

"As players, you got three or four things that we need to focus on, and then bring it together as a team. You just want to get back out there right now as an athlete and play again. We're in a great position to come back tomorrow and hopefully have a win."

The Diamonds and Roses will face off in the Quad Series final tomorrow at 6:30 am AEST.