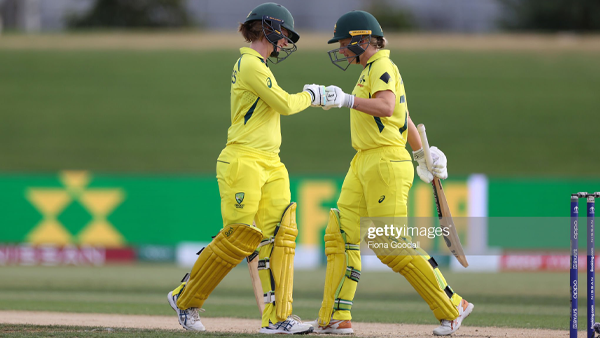 Australia cruised to a comfortable seven-wicket victory against Pakistan in the side's second World Cup match, with Alyssa Healy and Alana King clinical in determining the result.

Australia cruised to a comfortable seven-wicket victory against Pakistan in the side's second World Cup match, with Alyssa Healy and Alana King clinical in determining the result.

Australia has improved its position in the Women's Cricket World Cup, winning its second game in a row, beating Pakistan by seven wickets, assisted by opener Alyssa Healy scoring 72 runs in the chase.

With Australian captain Meg Lanning winning the toss and choosing to field, it proved to be a worthwhile decision as Pakistan's opening pair of Sidra Amin (two from nine) and Nahida Khan (nine from 10) both departed inside the first four overs, to have the side at 2-11.

Megan Schutt claimed the first wicket of the match, that of Khan's, when she got the Pakistan batter to edge to Lanning in the slip cordon. Lanning would again be involved in the second wicket of the day, holding onto a Amin edge, this time off the bowling of Ellyse Perry.

First-drop Bismah Maroof was a shining light for Pakistan, cruising to a score of 78* from 122 balls, supported by Aliya Riaz (53 from 109), the pair putting on a 99-run partnership - the highest partnership for Pakistan at a Women's World Cup - after the side fell to 4-44 with the wickets of Omaima Sohail (12 from 25) and Nida Dar (five from eight). Spin played a part in those two wickets with Alana King bowling Sohail, and Amanda-Jade Wellington getting Dar, caught by Lanning.

The partnership of Maroof and Riaz took Pakistan from the 13th over to the 45th before the latter departed, with Nicola Carey trapping her on the pad in front of the stumps. Despite the low score, Pakistan, with the help of Maroof was able to pile on another 50 runs in the final five and a half overs, with Fatima Sana (14 from 15) the only other wicket to fall, with King claiming her second wicket.

Australia needed just 34.4 overs to chase down Pakistan's total of 193, with many of its partnerships helping guide the team to victory.

First, Healy and Australia's centurion from the first match of its World Cup campaign, Rachael Haynes, put on a 60-run opening stand. At the 10-over mark, Australia was 0-59 - the highest powerplay score of the tournament so far - before the latter went for a run-a-ball 34, undone by the bowling of Nashra Sandhu, caught by Maroof.

Healy and Lanning then combined for 63 runs, with the high rate of scoring continuing as the Australian captain fell for 35 from 37 balls, bowled by Sohail. Healy (72 from 79) eventually fell in the 28th over when Sohail picked up her second wicket, though Australia was seeking just 41 runs for victory at that point.

Ellyse Perry (26* from 33) and Beth Mooney (23* from 26) remained composed at the crease, destined to bring the result home for their side, eventually doing so in the 35th over with a four through cover by Mooney.

USMAN KHAWAJA FALLS SHORT OF A FAIRY-TALE FINISH IN PAKISTAN

Speaking post-game, Lanning complimented the side's all-round performance, indicating the team had focused on different parts of their game to counter a different opponent, with the tactics working out well.

"I think, all round, it was a much better performance. I think, in the field we certainly lifted which was important, we really wanted to bring some energy there," she said.

"Pakistan brought a different threat to us today, their spin options were different and we had to make sure we adapted. I think we did that pretty well so [I'm] pretty happy with the performance tonight. I think we'd love to take 10 wickets, wickets slow down the run rate pretty quick so that's certainly our aim but Pakistan batted extremely well, they made it difficult for us to take those wickets.

"I think we were pretty disciplined through our bowling innings while we weren't taking wickets and sort of keeping that run rate in check which was important."

With Healy's half-century at the top of the order, and handy contributions from the top five batters in the lineup, the captain commended her teammates and the form they find themselves in, but expressed that it needs to be consistent going forward too.

"We sort of speak a lot about those match-winning not-outs from our top-four, which Pez (Ellyse Perry) was able to do today but we've all got starts I guess. We're all feeling in good nick, but we do need to make those match-winning contributions which we'll need to do coming up against New Zealand next."

Australia's next fixture of the Women's Cricket World Cup is against host country New Zealand at Basin Reserve, Wellington on Sunday March 13 from 9am AEDT.