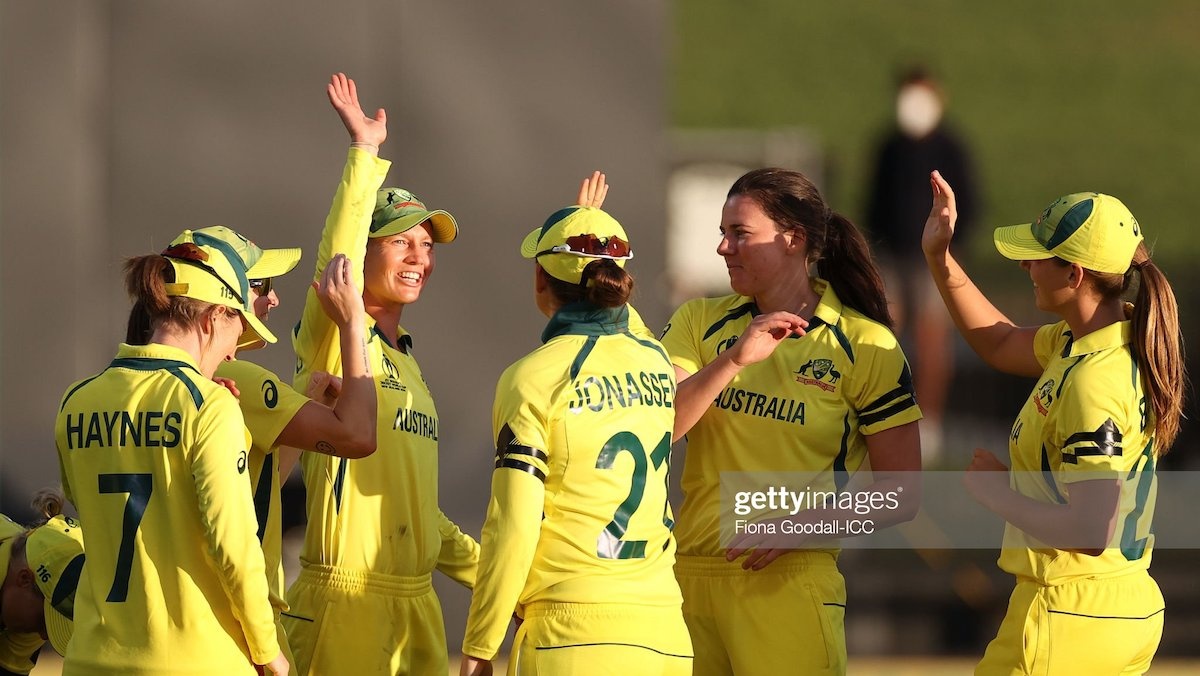 On a day when Australia was mourning the loss of two cricket greats Shane Warne and Rod Marsh, the Australian women's team have opened their World Cup campaign with a 12 run win over England.

On a day when Australia was mourning the loss of two cricket greats Shane Warne and Rod Marsh, the Australian women's team have opened their World Cup campaign with a 12 run win over England.

On a day when Australia was mourning the loss of cricket great Shane Warne, a day after the passing of another legend in Rod Marsh, the women - led by a Rachael Haynes century - opened their World Cup campaign with a 12 run win over England.

At Seddon Park, centurion Rachael Haynes batted Australia to an impressive 310 runs, which was defended by the likes of spinner Alana King taking wickets, before Jess Jonassen expertly held up England in the final over for victory.

Speaking after the win in Hamilton, Haynes said it had been a challenging two-day period leading into the game, learning of Marsh's passing and then waking up on match day to the news of Warne's death.

"We woke up to the news (of Warne's passing)," she said after the game.

"It was obviously really shocking. We'd known obviously that Rod Marsh had passed away and to wake up this morning and hear that a legend of the game in Shane Warne had passed away, it was just utter shock within the group.

"Alyssa Healy and I were chatting before the game and just sitting in the change rooms and saying life is really fragile and we think a tournament like this is pretty significant, but [it] probably just reinforced to us the ability to go out there and actually enjoy today and enjoy the game, because it's just obviously really sad that things can be taken away so quickly from you.

It wasn't just the players who were battling to keep their mind on the task either, as Haynes acknowledged many of the staff travelling with the group had spent time with Marsh as well.

"Obviously some of our staff knew Rod Marsh quite well too, so yeah obviously you know there's people processing grief and those sorts of things at the moment.

"So yeah, it was certainly a challenging 48 hours leading in."

England won the toss and elected to bowl, sending Australia in to bat with a strong line-up that was dominant against England in the recent Ashes win in Australia.

Although the wickets are different in New Zealand, and the World Cup is a completely different task, the Australians were upbeat heading into the opening game.

After getting off to a cracking start, Healy went upstairs to have her early wicket reviewed and the LBW decision was overturned to keep her in the middle.

She did fall though, caught just three deliveries later by Katherine Brunt at mid-wicket, a fairly comfortable take for the bowler.

Meg Lanning and Rachael Haynes took their time to settle in and adjust to the conditions, before building an incredible partnership that set Australia up for its first World Cup victory.

Both players surpassed 50 after getting through the challenging opening period, biding their time before elevating on the improving surface.

In the 41st over of the innings, Lanning smacked a pull shot over the boundary fence, which was fumbled by a member of the crowd but registered Australia's first six for the day.

A short while later, as both batters were tracking towards 100, Lanning flat-batted a cut shot to Tammy Beaumont and her innings ended on 86.

Beaumont, who had received some medical attention for a shoulder injury in the overs prior, took a strong catch on the final delivery for Brunt's day with the ball.

A marathon partnership of 196, the second-highest for Australia for any wicket in Women's World Cup history, was cut just short of the 200 mark, though, it didn't end the Australian runs as Haynes went on to make her century.

The century was Haynes first at a World Cup, which was a strong start to her 2022 tournament and Australia's: "it's always nice to score runs".

"It's funny coming into this game I was probably a little bit light on runs, I didn't feel out of knick but I was just getting out early. So yeah, it's really nice to make a contribution today.

"I think our top four is going to play a really big role in this tournament and our ability to go and score big hundreds is going to be really important, as I said - particularly on flatter wickets."

Nat Sciver ended Haynes' innings on 130 (from 131), an impressive effort from the Australian, who was caught at deep midwicket trying to send it over the fence for another six in the penultimate over.

Australia finished 3/310 off their 50 over innings with the bat, setting England quite the challenge.

With the target decided, Tammy Beaumont and Lauren Winfield-Hill opened the chase for England, though it wasn't an opening partnership to remember with Winfield-Hill sent packing by an incredible diving catch from Annabel Sutherland, off the bowling of Megan Schutt.

Captain Heather Knight joined Beaumont at the crease and they were able to combine to start England on a better path.

Beaumont made her way to 50, though she didn't get much further before her batting partner Knight's innings was done on 40, caught by Lanning, Tahlia McGrath the bowler.

King claimed her first World Cup wicket, dismissing Beaumont for 74 runs, and in her next over ended Amy Jones' day for four. Haynes took the catch at midwicket.

Between Sciver and Brunt a new partnership was formed; Brunt supporting Sciver, who brought up her century with a four, reverse-tapped fine to the boundary.

Given the ball at the death, Jonassen took an incredible one-handed catch to remove Brunt for 24.

Just a few balls later, off the final delivery of the match, Beth Mooney caught Sophie Ecclestone and Australia recorded its first win for the tournament.

Jonassen, with ice in her veins, held off the strong efforts of England for Australia to hold on in a thrilling opening match.

Jonassen wanted that ball in her hand for the final over and she delivered, just as she did on March 5 2020 in the T20 World Cup semi-final against South Africa.

"She wanted to bowl it, definitely," Haynes revealed after the game.

"And the thing about Jess Jonassen is she's been a real clutch player for us in the past and really stepped into those moments in years gone by.

"When we were talking about it she was actually already walking to the bowler's end to take the ball, so I think it was going to be pretty hard to get that over away from her."

The role of King was also crucial to the victory today, the leg spinner wrote on Twitter earlier in the day about the "idol and the biggest inspiration" Warne was to her.

"Her delivery to dismiss Tammy Beaumont was just exceptional leg spin bowling and got some momentum back for our side.

"And her ability to take wickets throughout the innings, particularly when the wickets are flattening out a little bit, I think it's going to be really crucial for us throughout the tournament."

It was a brilliant ball that lured Beaumont in, before Healy took her stumps, and King made an apt tap to her black armbands, acknowledging the idol that was Warne.

Australia takes on Pakistan on Tuesday at Bay Oval, Mount Maunganui in its second World Cup match, from 12pm AEDT.