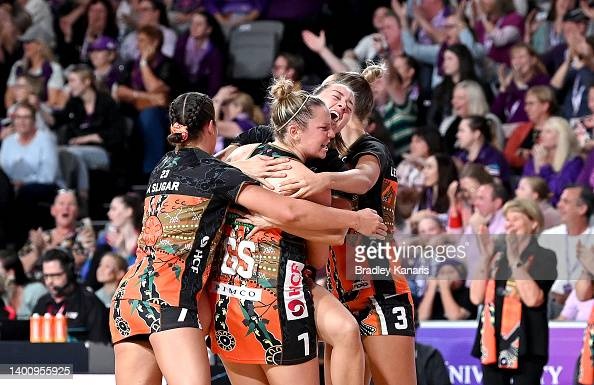 Thanks to a gutsy super shot from Jo Harten, the Giants have come away with a season-defining win against the Firebirds.

The Queensland Firebirds and Giants kicked off the second week of the First Nations Rounds on Turrbal and Yuggera Country. Back in Round Four, the Firebirds came out victorious, 72-59. This time, it was the Giants who made it out on top, 73-72.

During today’s game, the tournament’s two First Nations players, Donnell Wallam and Jemma Mi Mi were wearing ochre. White ochre is made from sediment from the land, connecting those who wear it.

Of the two teams, the Firebirds needed the win more, only just making it into the top four on their goal percentage. The Giants had a win up on the teams ranked 4th-7th, meaning a loss could still keep them in the top four.

The Giants were able to start off the match in enemy territory before Wallam quickly converted. The sea of purple in the crowd rejoiced when the Firebirds got an early turnover, but April Brandley denied them of their goal.

A held ball allowed to Giants to be the first to break the score. Soon it was the Firebirds' chance to capitalise off a held ball, allowing them to get ahead following another mistake from the Giants.

Immediately on the Power Five siren, Sophie Dwyer put two points on the board, putting her team up 12 - 9. After Wallam’s lay-up the Firebirds called a tactical time out. As it was the Giants’ centre pass, Dwyer flexed her long-range shooting skills, with another super shot.

Earlier in the week, the Firebirds’ Ruby Bakewell-Doran was elevated into the 2022-2023 Australian Diamonds squad. In today’s game, she was showing just why the Diamonds selection squad couldn’t ignore her. Despite her defensive efforts, the Giants were continuing to pump out the super shots. To close out the quarter, Wallam made a super shot of her own, putting the Firebirds 17-19.

The Firebirds kicked off the second quarter, but it was the Giants who once again broke the shot-for-shot play. An injury time out was called as Kim Ravallion limped off court. Lara Dunkley came on as centre for the first change of the game. Ravallion's injury appeared to be minor, coming back on court later in the game.

The Giants were starting to get away from the home team, with Dwyer continuing to drop long-distance shots even when the second point wasn’t in play. She closed the first half with no missed goals.

With a few misses and turnovers going their way, the Firebirds were coming back into the game, drawing even with two and half minutes to go. Quickly, the Giants called a timeout in an attempt to reset. Interestingly, the team called another with sixteen seconds left, up 34-33.

At half-time, April Brandley commented, “It feels intense, from the moment we got out here we knew it was going to be a tough game.”

“They always come out super tough at home. The intensity’s great, it’ll be interesting to see what happens in the second half.”

Coming in hot for the second half, the Giants pulled away once again. After the scores hit 43-37, the Firebirds called a timeout. Following this, they had a four-goal run, hitting the final five minutes 44-45.

With the Firebirds up one with two minutes to go, Coach Julie Fitzgerald pulled her team off court to talk tactics. Lauren Moore came in at goal keeper for Tilly McDonell who appeared to have something in her eye. By the fourth quarter, Tilly returned to court.

On the buzzer, Donnell Wallam made a super shot and the crowd erupted. This put the home team up one point into the final quarter.

"So that sort of stuff in those scenarios that we do at training, she smashes it every week at training, so we're not surprised."

As the minutes wound down in the final quarter, the Firebirds started to create a gap between themselves and the Giants. It didn’t last long, as the Giants came drew level with a three-goal run.

With four minutes to go, it was 67-66 in the Firebirds' favour. Gabi Simpson called a time out for the leading team. After a breaking call against Gretel Bueta, the Giants had a chance to get the win without extra time.

VIXENS A STEP CLOSER TO MINOR PREMIERSHIP WITH WIN OVER LIGHTNING

GIANTS TAKE DOWN THE THUNDERBIRDS TO STEAL THIRD SPOT

The desperation in both teams made for a thrilling final passage of play. Harten backed herself for the super shot, denying the Firebirds an extra time show-down.

Post-match, Coach Julie Fitzgerald discussed the nail-biting finish, "I left the court almost straight away, I said hello to friends and went to the change room because I was still shaking. Like I think games like that, that are so close all the way through take a lot out of you."

"I really respect the fact that fact that were brave enough to go for the two and look for the win and not just be settling for draw."

Centre Jamie-Lee Price was named player of the match, leading her team in Nissan Net Points. Price ended the game with 24 goal assists, two gains and one intercept.

The Giants will host the Lightning next Saturday at Ken Rosewall Arena. On Sunday, the Firebirds will head down to New South Wales to face the Swifts.