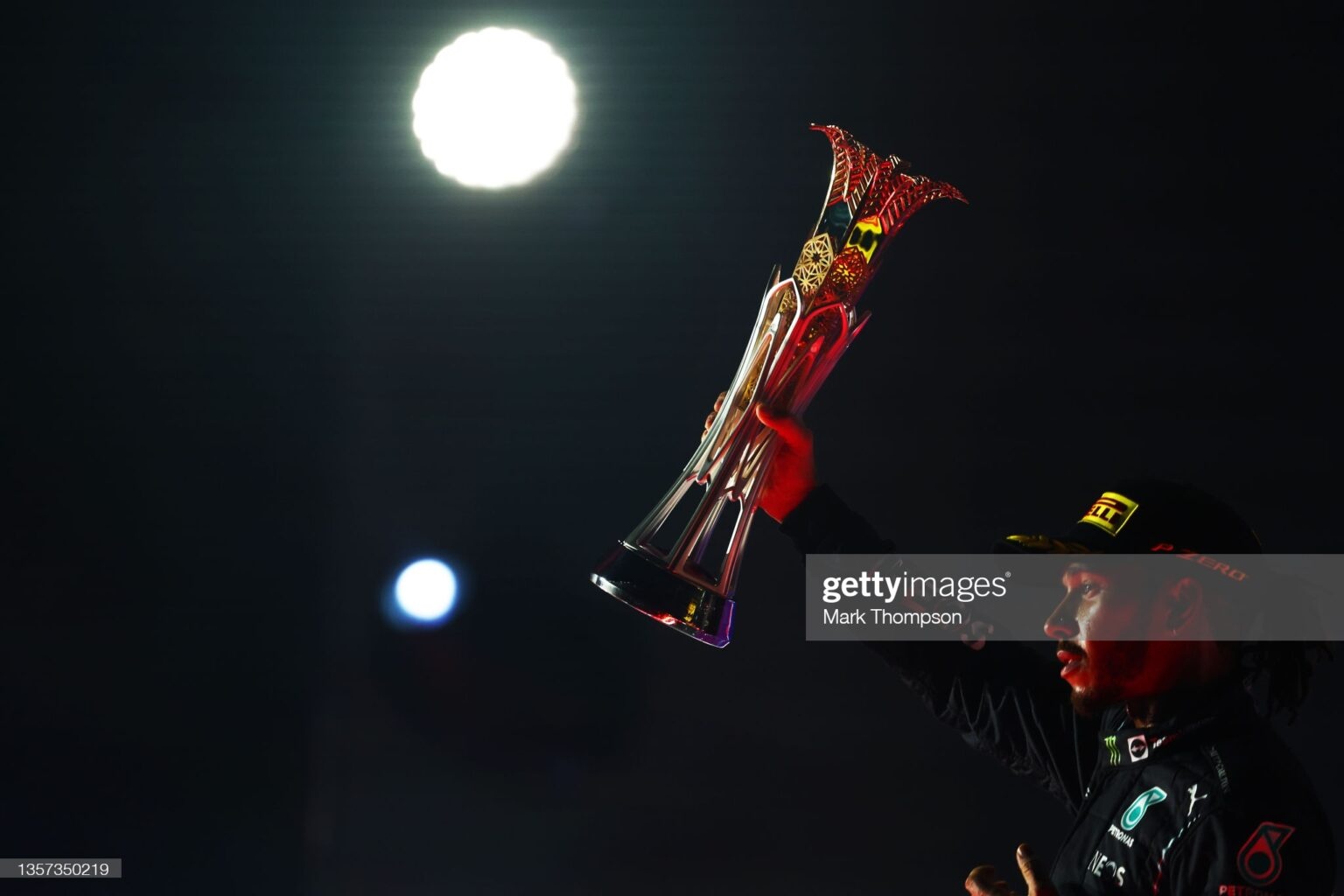 It's all tied up in heading into the season finale as Lewis Hamilton secured victory against Max Verstappen in a dramatic race in Saudi Arabia.

It's all tied up in heading into the season finale as Lewis Hamilton secured victory against Max Verstappen in a dramatic race in Saudi Arabia.

The World Championship is tied with one race to go after Lewis Hamilton securesvictory over Max Verstappen in an inaugural Grand Prix in Saudi Arabia.

Rounding out the podium, was Hamilton's teammateValtteri Bottas, who snatched the third position fromEsteban Oconon the final straight.

But this race did not come without controversy as Hamilton and Verstappen were embroiled in a dramatic on-track duel. Neither party was happy once the race concluded, both feeling frustrated by the officiating and their rival's antics.

Mercedes, leads Red bull by 28 points in the Constructors' Championship, thanks to both its drivers earning podium finishes. Redbull's campaign encountered a huge blow asSergio Perezdid not finish the race.

A frustrating, controversial race for sure, it sets up a nail-biting finale to what has been a tight, entertaining season of Formula One.

The Jeddah Corniche Circuit is the ultimate Formula One track. It's the quickest street circuit and has been likened to Silverstone, with Monza-like speeds and Monaco-style walls.

However, despite anticipation and excitement, it’s had an atmosphere of concern and impending doom surrounding it, even before teams touched down in Saudi Arabia.

Many feared the track would be incomplete come the Grand Prix, but luckily, construction was completed in the nick of time. It gave the FIA time to approve it the week of the Grand Prix.

Despite the approval, concerns have not been alleviated entirely as safety apprehensions lingered across race weekend.

Many noted the track’s narrow walls, high-speed corners, and blind corners, fearing a safety car would be deployed. This fear came into fruition throughout the race.

The Formula Two drivers shared the track this weekend, experiencing similar difficulties and incidents to their Formula one counterparts.

Turn 22 in particular caused headaches for drivers. Ferrari’sCharles Leclerccrashed into the wall in the dying minutes of the second practice while Haas' Mick Schumacherwas its first victim during the Grand Prix. He collided with the barrier during lap 10 andprompting a safety car and eventually a red flag to call the race off momentarily.

Whatever the result, there is no doubt the track’s safety will be an important discussion point going forward.

A gamble pays off

Turn 22 was cursed for many including Schumacher, but a blessing for Verstappen.

During lap 10, the Haas driver hurtled into the barrier, prompting a safety car spanning over the next four laps. In that time, numerous drivers including both Mercedes drivers took the opportunity to take a pit stop. Redbull took a gamble, keeping Verstappen out on the track allowing him to remain first.

However, Verstappen was unhappy with Hamilton’s teammate’s antics as Bottas drove slowly during the safety car, allowing Mercedes a double-stack pit stop.

This gamble paid off for Redbull as the race was red-flagged to let stewards to a punctured barrier. Verstappen received a free pit stop – allowing him to keep the lead over the two Mercedes.

The red flag was waved again only seconds after lights out, as a crash at turn one forced three drivers to retire. Leclerc andPerez collided, leavingGeorge Russellwith nowhere to go but back to the sheds afterNikita Mazepinran into the car's rear. Of the quartet, only Leclerc could continue on.

But before the stewards could pull out the red flag, Hamilton and Verstappen were embroiled in another incident.

Hamilton had the better start, overtaking Verstappen almost instantly. The Dutchman attempted to regain the lead by going off track at turn 2 and rejoining ahead of Hamilton. Among the chaos, Ocon snuck from fourth to second, separating the two championship rivals.

However, the officials weren't happy with Verstappen's overtake, as he went off the road and onto the curb.

From that point on, it rained penalties, drama, and controversy between the two World Championship candidates.

Ocon sat at P1 for the third restart after race officials told Verstappen to hand his place back to Hamilton. Verstappen sat in third behind his rival as racing got underway again in Saudi Arabia.

However, this time, Verstappen took the inside line to lead the pack, overtaking Hamilton, and then Ocon within a few turns. Hamilton then passed Ocon, putting both championship candidates in first and second with over 30 laps left.

The first of many virtual safety cars came during lap 29 asYuki TsunodaandSebastian Vettelmade contact and struck the barrier. Tsunoda was handed a 5-second penalty while the rest of the grid underwent a virtual safety car until lap 33.

Three laps later, Vettel had another incident, this time withKimi Raikkonenwhich damaged his car further. A virtual safety car was once again deployed as debris from the Aston Martin was scattered across the track.

This interruption could not have come at a better time for Verstappen, as Hamilton was well within DRS range and ready to take over.

Once released from the virtual safety car, Hamilton attempted to take the lead from Verstappen, who went wide off the track to avoid being overtaken. The race officials gave Verstappen a five-second penalty for the move later on.

Next lap, Verstappen was also directed to give his place back to Hamilton, which he decelerated to do so. However, Verstappen's order was not communicated to Hamilton, causing him to collide with the Red Bull's rear and damage his Mercedes' front wing.

Upon review of the collision, the FIA decided Verstappen needed to surrender his place to Hamilton again. He complied, allowing Hamilton to take the lead for a moment, but cleverly snatching back the lead in seconds.

During lap 43, Hamilton utilised DRS to overtake Verstappen and ultimately lock in victory at the Saudi Arabian Grand Prix.

His teammate locked in the final podium position, edging out Ocon who had sat in third for most of the race.

It was abundantly clear neither party was happy with the officiating, both during and post-race.

Both drivers and their respective teams felt hard done by the officiating, writing another chapter in the Mercedes-Red Bull saga of 2021.

Verstappen exited the podium after official proceedings and did not participate in the usual celebrations with the victorious Mercedes team.

Although he came second, Verstappen also won Driver of the Day which seemed to be a consolation prize at least after a dramatic day.

"Luckily the fans have a clear mind about racing. I’m just trying to race. This sport is more about penalties than racing. I’m pleased the fans enjoyed it and I gave it my all today," he said upon being informed.

Post-race, Hamilton was equally as unimpressed.

"I really had to just try and keep my cool out there which was really difficult to do," he told Sky Sports F1.

"I've raced a lot of drivers through my life in the 28 years [of racing] and I've come across a lot of different characters and there are a few at the top which is kind of over the limit. Rules kind of don't apply, or don't think of the rules."

The eight-time world champion said his rival fell into that category of drivers who were 'over the limit.'

Both drivers were summoned to the stewards.

Daniel Ricciardofound himself in the points again, after going three straight Grand Prix without scoring.

Heading into the race, the McLaren Driver started 11th on the grid but inched his way up to ninth place. Not long after, he overtookPierre Gaslyand locked in eighth position before the first safety car.

During the safety car, he and his team elected not to pit, enabling him to finish in fifth place. In hindsight, it was a crucial, and correct decision as he, like his former teammate Verstappen, had a free pit-stop.

When lights went out for a second time, Ricciardo moved into fourth after overtaking Bottas. He remained there until Bottas passed him in the last few laps.

It was a welcome result for Ricciardo and McLaren, who took home 10 points. He now sits in eighth position on 115 points for the season.