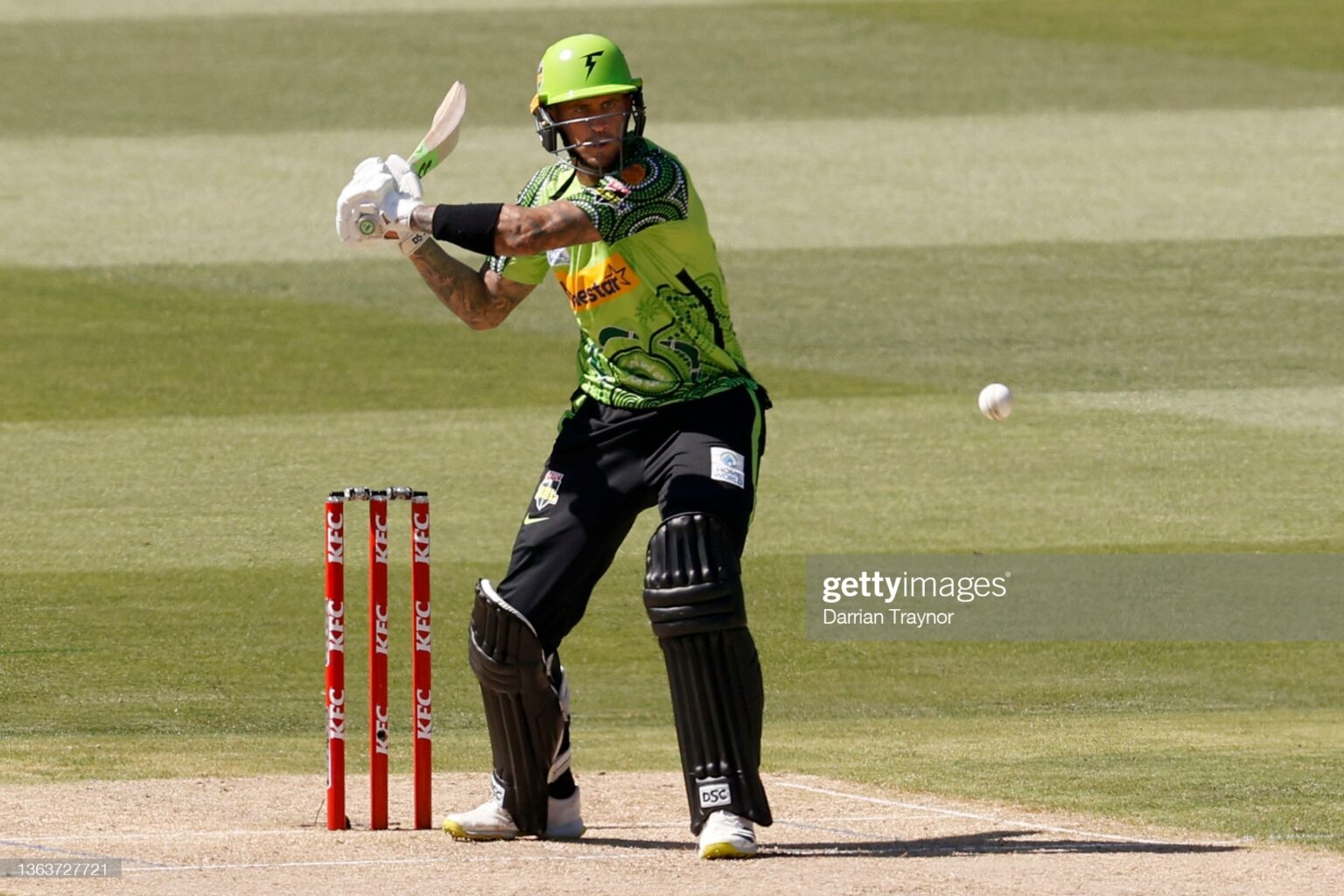 Hales and Thunder rained down at the MCG as the Sydney Thunder made it six in a row in BBL 11, they were led by an Alex Hales 80.

Hales and Thunder rained down at the MCG as the Sydney Thunder made it six in a row in BBL 11, they were led by an Alex Hales 80.

The Sydney Thunder have run over the top of the Hobart Hurricanes at the MCG to take home three points and push themselves to second on the table with an 8-3 record.

The Hurricanes who are still missing Matthew Wade due to personal reasons, struggled to get a good score together on what was a difficult, up and down pitch.

They never really put any momentum together with Ben McDermott and Pete Handscomb putting together the best partnership of the innings with 53 runs 44 balls. While there was the occasional boundary, the rotation of singles just wasn’t there as slower balls got consistently stuck in the pitch with the batters often finding the infield.

Alex Hales spoke after the match about how difficult the pitch was.

“I was trying to go early but it wasn’t coming off, the pitch was up and down it took time to get used to the pace.”

McDermott was eventually out the 10thover just before the drinks break unfortunately for the Hurricanes they couldn’t grow any momentum without the competitions leading run-scorer in McDermott. Pete Handscomb continued to push the ball around but was eventually out for only 21 from 25.

It seems that Handscomb is mostly playing on reputation at this point, his century for the Stars was quite a few years ago and since then he hasn’t really made a huge difference in T20 cricket. That being said he is the captain in Wade's absence and therefore probably keeps his spot going forward.

D’Arcy Short’s troubles with the bat continued, he barely could hit the ball off the square for a lot of his innings. It wasn’t until his three fours at the end of the power surge that he got his strike rate above 100. He is such a talent but is clearly struggling with the bat.

Through the Thunder bowling innings, it was pretty clear that the ball was sticking into the pitch, especially the slower balls and everything from the spinners. Nathan McAndrew was the best of the bowlers with 2-31 from his four overs, his slower balls into the pitch made it almost impossible for the Hurricanes batters.

Jason Sangha has been promoted into the captaincy role over the last couple of games with Chris Green out of the side due to COVID. Perhaps the only mistake he made today was not bowling the Pakistani import Mohammad Hasnain his full quota, he only managed three overs for 15 runs.

That being said Sangha brought himself on for an over, and who doesn’t love seeing a 22-year-old captain using that power to have a bowl. He did well as well, with the over only going for three runs.

The Englishman Jordan Thompson came in late to smash two sixes and bring the total to 139, a low score but just not good enough against the Thunder.

Alex Hales and Matt Gilkes then came out for the Thunder and were batting positively. The pair managed to get through the powerplay without loss while putting 32 on the board. It felt like the Thunder would get the win with ease.

However, in the next over D’Arcy Short took the wicket of Gilkes who tried to come down the wicket. That allowed Jason Sangha the captain to come to the crease with Hales to try and get to the Bash Boost target of 64.

It wasn’t to be though with the pitch working against the Thunder, the squeeze was on especially by the spinners from the Hurricanes D’Arcy Short and Sandeep Lamichhane. It got to the point where Hales needed four from the last ball before drinks to get the extra point, but it wasn’t to be with the ball squeezing out to mid-wicket for one.

Alex Hales also discussed his batting experience on the pitch.

“I got there eventually, the first 20 or 30 balls was quite hard, it was a pretty difficult pitch to bat on.

“Jason Sangha and I identified that it was going to be difficult to bat on for new batters, so we had to soak up some balls and then go at the power surge, thankfully it came off today.

“Sandeep was their main threat, so I tried to keep him quiet while we were getting settled. You could read the ball but the odd one was spinning and the odd one was skidding, we looked to take the seamers on later in the innings.”

It really was the seamers and the power surge that Hales targeted. In fact, hales became the first player to face all 12 balls of the power surge hitting 31 runs from those two overs, the second most of all time in the surge for one player.

In the process Hales registered his 59th fifty of his T20 career as the runs needed off the last five overs was only 36. Hales finished with a score of 80 his highest of the season while Jason Sangha finished on 35 to increase his average to 65.80 in BBL11.

It was always going to be tough for the Hurricanes with both Matthew Wade and Nathan Ellis out of the side. The par on the pitch was probably closer to 160. If Ben McDermott had come off again they might have got there but the Hurricanes need to be careful not to just rely on him in every match.

The Big Bash continues tonight with the Melbourne Stars taking on the Adelaide Strikers live from the MCG.