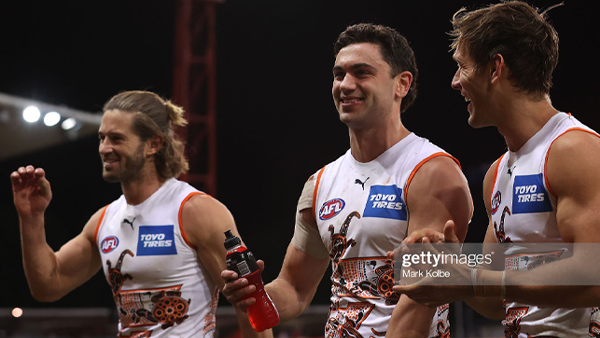 The GWS Giants will look to celebrate three milestones this weekend as Callan Ward is set to play his 250th AFL game, with Tim Taranto and Jesse Hogan lining up for their 100th.

The GWS Giants will look to celebrate three milestones this weekend as Callan Ward is set to play his 250th AFL game, with Tim Taranto and Jesse Hogan lining up for their 100th.

The Greater Western Sydney Giants look set to have three players celebrating their milestone games this weekend, with Callan Ward, Tim Taranto and Jesse Hogan all in line to do so against the Richmond Tigers at the MCG on Sunday afternoon.

Ward, who has been with the club since its inaugural season in 2012 after crossing from the Western Bulldogs where he spent the first four years of his AFL career, is preparing to play his 250th career game - 189 of which so far have been with the GWS Giants.

Ward entered his first season at Blacktown with 60 games under his belt, and enjoyed his first season in the orange, winning the inaugural Kevin Sheedy Medal as the club's best and fairest player in 2012. He was also entrusted with the co-captaincy in the first year of the club's inclusion into the AFL, alongside former Crow Phil Davis and former Lion Luke Power, a position he'd hold with Davis until the end of the 2019 season.

Speaking to media on Thursday morning, GWS coach Leon Cameron spoke highly of Ward's character, especially bringing attention to his manner in all areas of the club and within the game, which ha culminated in bringing up the 250-game milestone.

"He's picked himself up and moved from the Bulldogs... and been a super player for us, his character is just unbelievable on and off the field," Cameron said.

"He's a well-rounded person, we know what he does on the field in terms of his hardness and his competitiveness, he never gives up so when those milestones come along for such a special person at a footy club, you want to put your best foot forward and I'm sure the other 22 players that run out with him will want to make sure it's a significant day for him. Hopefully, we can celebrate Wardy in the right manner."

Fellow milestone man Tim Taranto also praised his teammate for his output on and off the field, but more so for being someone he looked up to at the very beginning of his playing career since joining the Giants via the 2016 draft.

"He's huge, he's someone that I clinched onto as soon as I walked through the doors, he welcomed me with open arms, he's probably one of the best people at the club, terrific person first and foremost, gets along with everyone, most-loved bloke I've ever met," Taranto told media on Thursday.

"Obviously everyone knows how good he is on the field but he's the most courageous player in the AFL this week and probably one of the most skilled.

"His on-field stuff speaks for itself, his courage and his leadership, someone we all get behind every week and [he's] been doing it for 250 games so, super proud and super lucky to be running alongside him, he's one of the best people I know and [I] couldn't be happier for him."

Taranto himself is preparing for his own milestone against Richmond this weekend, set to line up for his 100th game. Since making his debut in Round One in 2017, Taranto has played in four finals series, one Grand Final, and won the Kevin Sheedy Medal in his third year at the top level, in that Grand Final year of 2019.

The 24-year-old midfielder acknowledged the achievement, including how quickly it had come about but remained thankful and grateful for a network of friends and family, as well as the club he's been a part of for the past five years.

"[I] never really thought about it once I got drafted here, I thought 'Wow, this is gonna be a hard team to break into', 'Am I gonna last?', 'Am I gonna get to 100 games?' but it's come around pretty quick.

"To play alongside a couple of other guys who have already played 100 games and then Wardy this week, 250, is pretty crazy so [I'm] just very happy and thankful for my family. I just feel really loved and really supported by my friends and family which is really nice to feel."

His coach echoed just how little time had passed since Taranto made his debut to playing his 100th game, explaining that his adaptability has seen him become a vital player for the Giants throughout the years.

"He has got there (to 100 games) quick. Clearly we rate him, 100 games at his age is a phenomenal effort, he's always there, he's had one major injury and that was his shoulder but he bounced back pretty quick from that," Cameron said.

"He's flexible, he's adaptable, he's been playing forward, he plays mid[field], he plays on the wing, so, those sort of players, and he's got a huge motor, they're hard to come by. We rate him that highly... young leader for our footy club and he's got such a good group of friends that help combine and bind our footy club together.

OPINION: AS MEN, THIS WEEK WE FAILED WOMENIN SPORT

The final player who could be celebrating a milestone achievement - his 100th AFL game - this weekend is Jesse Hogan, the second-year Giant and former Demon and Docker.

Hogan, a Rising Star Award winner in 2015, suffered some hardships both on and off the field from 2017 onwards, including injury, a testicular cancer diagnosis, plus some personal matters and mental health issues, returned to his home state of Western Australia in 2019, and after two years, moved once more, to New South Wales.

The forward had been dealing with soft-tissue soreness during the 2022 pre-season which lead him to miss Round One, consigned to playing limited minutes in the VFL, however, both Cameron and Taranto hope to see him on field this weekend, each declaring he's a good chance to be selected in the team lineup.

"He is [ready to play at AFL level], no doubt he's put his hand up and he's most likely more [of a] chance to play because he [played] 60 or 70 minutes so he's had a good couple of weeks. He's had a pretty good pre-season up until he missed Round One in the AFL so we expect him to pull up really well", Cameron mentioned.