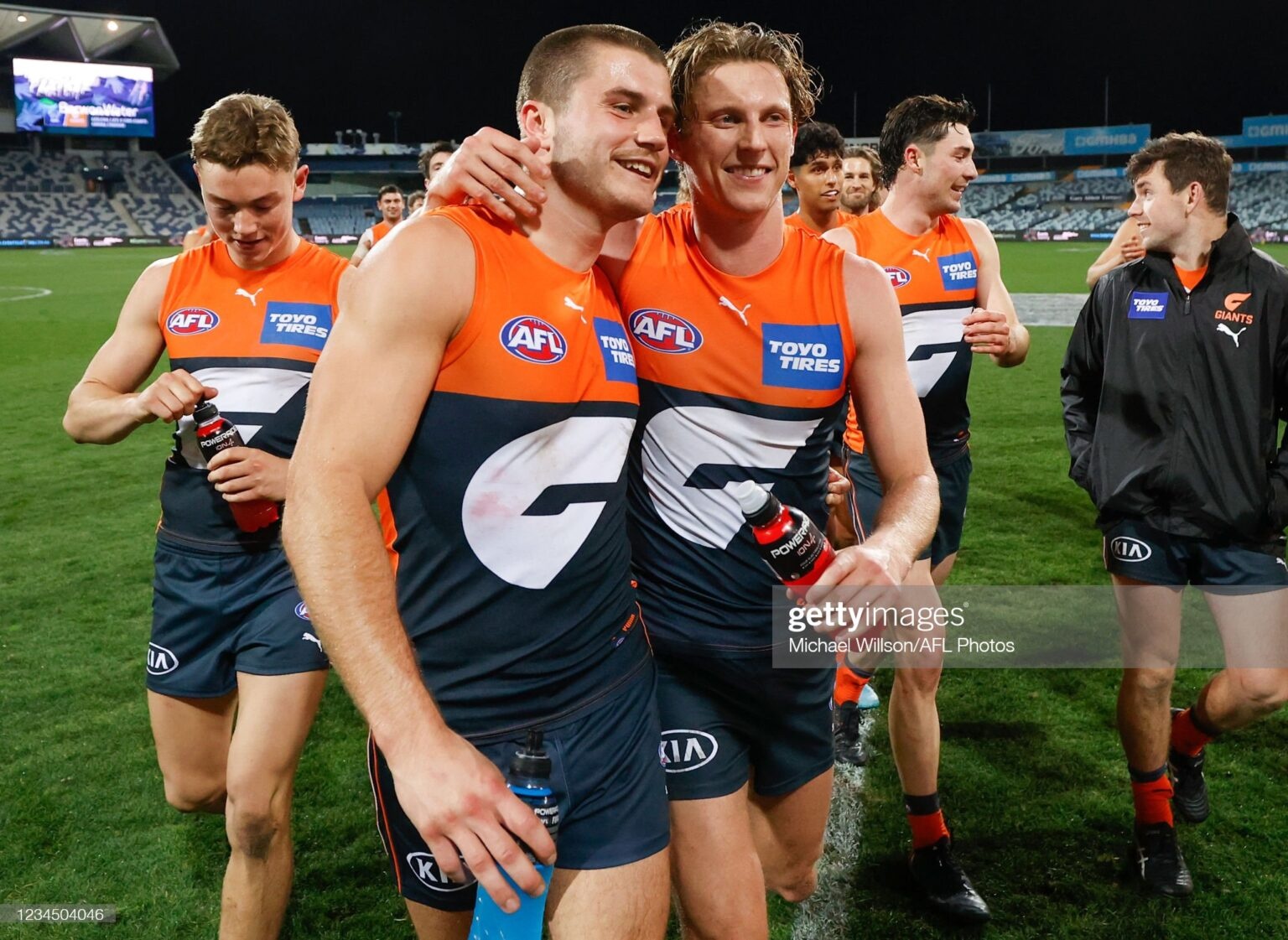 GWS Giants are primed for a huge 2022, after working through adversity last season, and retooling to be even better this season.

GWS Giants are primed for a huge 2022, after working through adversity last season, and retooling to be even better this season.

After threatening to break through for the past few years, has the adversity of being bundled out finals steeled the Giants for a run at the last Saturday in September?

The Giants were backing up from a year where they missed finals in 2020, and bounced back in style. Overcoming a raft of injuries, and an early-season form slump, the Giants found their way into the finals.

Toby Greene stepped into a leadership role while Stephen Coniglio was injured throughout the season, and the Giants found their way into the finals.

An elimination win over the Swans was one of the highlights of the season, as the one point thriller not only sent the Giants into the second week of the finals, but it had the added bonus of ending the Swans' season.

The downside of the victory was the suspension of Toby Greene, which affected the semi final loss, and will now make it tougher for the Giants in 2022, as they will miss him for two rounds this season.

Health. The Giants had only four players appear in every match last year, and had only five players who only missed four games or fewer. While the injury epidemic plagued the Giants last year, it may help them this season.

If they can stay on the park, the Giants will be bolstered with great depth and the top flight talent that spent much of last year on the bench. The Giants will hope that they can have selection challenges due to internal competition, not injuries and suspensions.

The other key for the Giants to improve will be to improve the effectiveness of their key forwards. Jesse Hogan managed just 20 goals last season, while Jeremy Finlayson (who has since departed the club) had 13 goals.

Toby Greene led the way with 45 goals, but the Giants will be hoping to have more effectiveness from a genuine marking target in 2022.

The Giants started slowly in 2021, with three losses out of the gates, before Callan Ward and Josh Kelly returned to the midfield. The changed combination worked, as the Giants found a way back into the competition and into the mix for finals.

The new generation of midfielders also stood up, growing week in and week out to show the bright future of the club. Jacob Hopper was rewarded with a place in the All-Australian 40-man squad, and Tim Taranto grew into a future leader for the Giants.

Despite a 10 week road trip, including five 'home' games played away from Sydney and Canberra late in the season, the Giants made it to the semi-final, where they fell to Geelong by 35 points.

The run out of defence.

The Giants have long had stars like Nick Haynes provide rebounding run from defence. Over the last few years, Lachie Whitfield has grown into the role as well, with the polish of the former No. 1 draft pick slicing through defences and setting up attacking play.

Leek Aleer is freshly drafted, but showed flashes of X-factor with the SANFL last season, and may make an impact with his speed and explosiveness later in the season if thrown into defence, in a similar way to Jordan Dawson and Elliot Yeo have long helped their teams do so.

With quality ball movers like Josh Kelly, Tim Taranto and Stephen Coniglio in the midfield, if the Giants can rapidly turn defensive turnovers into attacking momentum, they will be able to score quickly and cover some of the other deficiencies in the side.

The Giants will be hoping that the fleet-footed brigade of Cummings, Haynes, Whitfield and Co will be able to turn the Giants into a counterattacking machine for season 2022.

The Giants are still lacking genuine key forward options. Jesse Hogan has shown flashes as a key forward, but only played nine games last season, and hasn't played a full healthy season since 2018 (20 games for Melbourne).

Jeremy Finlayson showed some ability in the role but has departed the Giants, and Harry Himmelberg has shown that he is better as a second (or even third) choice key forward.

For the Giants to succeed in 2022, they cannot rely on Toby Greene as a marking target. Greene, who will miss the first handful of games due to suspension, is a diminutive figure anyway. His aerial prowess is best used when he has a run and jump at the ball, and not with a defender hanging on.

As prolific as the midfield has been in the past, relying on Josh Kelly and Tim Taranto to maintain their 0.6 and 0.4 goals per game, relying on midfielders to chip in enough goals to regularly kick a winning score is a dangerous strategy.

The Giants will be hoping that Hogan stays fit, and Zach Sproule returns from his shoulder injury sooner rather than later.

Tom Green has played 24 games for the Giants, including 18 last season, and the Academy product looks to be a genuine star.

The young midfielder has bulked up since being a top-10 draft pick in 2019, but his clean hands and vision inside the clinches have been hallmarks of his game since before then.

Green has fitted into an AFL-standard midfield with ease, and has two Rising Star nominations to his name as a result.

In his first two years, he has 19 disposals and three tackles a game, and will hope that season 2022 brings even more growth. His trajectory is only helped by playing with people like Josh Kelly and Stephen Coniglio, who will attract a tag more often than him, allowing Green to go under the radar for longer.

Expect Green to become a household name and a star of the competition for the Giants this year.

The Giants have too much talent, and have been through too much adversity for the wheels to fall off. Despite this year looking to be a very competitive competition, expect the Giants to do well.

If the Giants can grab two to three wins while Toby Greene is suspended for the first five rounds, they will be in prime position to make a run at finals, and even a double chance.

These Giants are ready to make a big big sound.