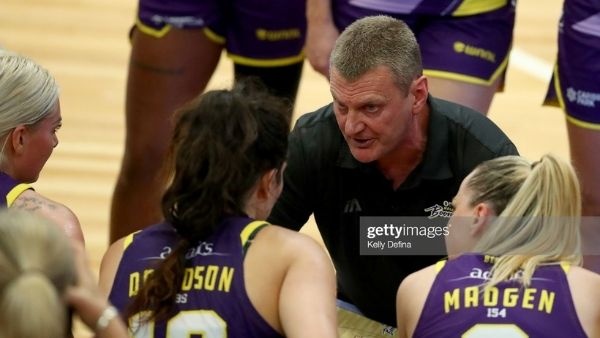 Guy Molloy: Leaving a legacy at the Melbourne Boomers

Guy Molloy: Leaving a legacy at the Melbourne Boomers

“I've been coaching men's basketball for a long time,” Molloy told Edge of the Crowd.

“I started my career coaching women's basketball and had some approaches from some pretty influential people around the Bulleen Boomers Basketball Club in the WNBL.

“They were interested in me to take on the head coaching role. I wasn't sure if that was the direction that I wanted to go. In my mind that I would agree to it but only do it for a year and nine years later here I am.”

When Molloy joined the Boomers, they were in the process of rebranding from the Bulleen Boomers to what is now known as the Melbourne Boomers.

“I think that we're looking to move out of the association footprint and embrace the wider basketball population of Melbourne which is clearly a pretty huge beast.

“We were trying to create a footprint that was just bigger than the Bulleen Templestowe basketball area.

“The rebranding to Melbourne Boomers happened before the first game or not long after I was signed on to coach the club and that's been a great success and a big part of this journey.”

The first season Molloy was at the helm of the club his team included Rebecca Allen, Rebecca Cole, Tess Madgen and Amelia Todhunter just to name a few. With the Boomers being one of the first steps in their Basketball journey.

“They were a little blue-collar, can-do team and they're probably the reason that I stuck around with it.

“I mean, they were overachievers, they were a great team. I think we've been predicted preseason to finish in the bottom two, they made the finals and were knocked out in the first round of the finals.

“Our import had blown her ACL and wasn't available and the fact that they got so far without even having an import player just spoke volumes for that group and that was what really got me excited.

“I think about the new club and the direction it was going and you know, we had some tough times after that. When Bulleen Templestowe handed back the licence, but that first group there was certainly a memorable one."

Molloy’s first Boomers side has gone on to achieve great things with Allen now playing in the WNBA and Cole being one of the best 3x3 basketball players in the world.

“It's been a huge thrill, a couple of those girls went from where they were to become WNBA players and European players.

“Bec Cole had a really strong career at the Boomers and then became an Australian representative at three on three and now a very dominant player for the Southside Flyers so they were just great stories out of that group.

“Really proud of them all.”

Molloy went from training the side at a local primary school at 7 pm to training in a world-class facility in Melbourne.

“We often tell the stories that we would train at seven o'clock at a local primary school where we'd have to get the rubbish off the floor and sweep it ourselves.

“The girls would train really hard and grab some Maccas on the way home. That was the lifestyle of it and we try and tell the players these days that they've climbed on the shoulders of those giants in many respects because now they're living a much more professional lifestyle.

"They turn up to training in a wonderfully redeveloped high-performance athletic centre with strength and conditioning and meals provided and massages, wonderful facilities and they do that during the day.

"So the growth of the club to become, I think the probably the standard-bearer for women's basketball in Australia has just been, it's been a great journey.”