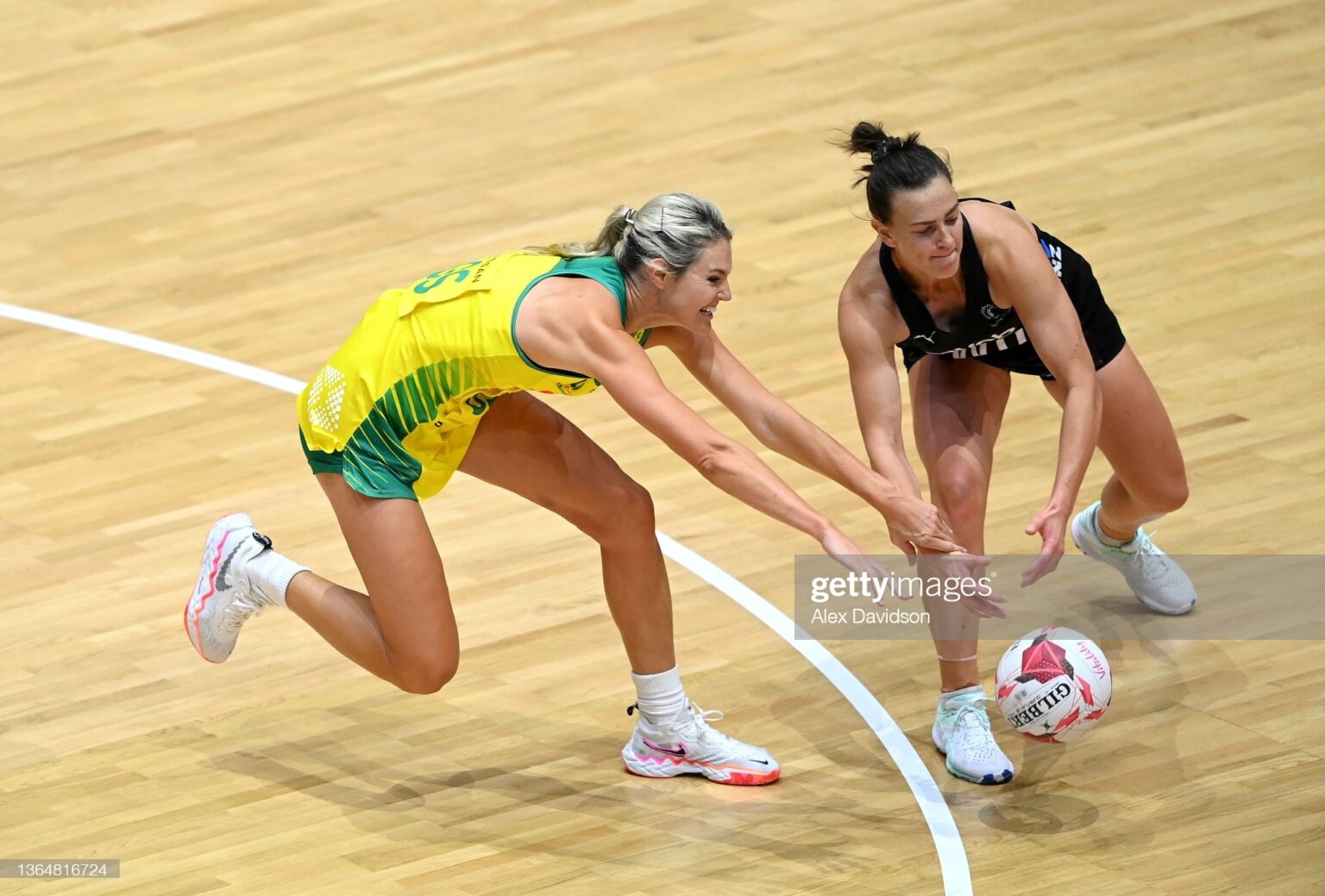 Gretel Bueta and Steph Wood led the way for the Diamonds as they dominated the Silver Ferns to kick off the Quad Series with a big 53-39 win.

Gretel Bueta and Steph Wood led the way for the Diamonds as they dominated the Silver Ferns to kick off the Quad Series with a big 53-39 win.

In their first appearance in 315 days, the Australian Diamonds returned to international netball with a bang against the New Zealand Silver Ferns. In the first match of the Quad Series for either side, Australia started out of the blocks and never looked back.

Liz Watson was playing her first professional netball match in the same time period, and as she stepped out on court, it looked like she hadn't missed a beat. She finished with 34 feeds, with 18 of them resulting in an attempt, and played all 60 minutes of the match.

Watson was in control at all times, and her midcourt combination with the previously overlooked Paige Hadley (in centre) and Ash Brazill (in wing defence) powered Australia's attack with speed and crisp ball movement.

"We've had quite a few when you look at the lineup that have either been out for 12 months or two years in this group because of covid or because of personal circumstances.

"Paige had a great SSN season last year, and she certainly worked really hard from last Constellation Cup, taking some really key feedback, and she's certainly brought that into the training environment.

"Her role is that she brings an intensity and an honesty to the group, which has really helped not only the people around her, but the way in which she's built those relationships within the combination."

The Diamonds started well, with 17 goals at 100 per cent accuracy in the first quarter, while the Silver Ferns duo of Maia Wilson and Tiana Metuarau were less accurate, shooting 10 goals from 13 attempts. Ash Brazill also had two intercepts in the first quarter, as she set the scene for a Player of the Match performance.

"We obviously haven't been out in the international environment for a while, and we had a really strong focus on the brand that we want to keep putting out on court, and how do we contribute the way in which we bring that to life, and I thought the girls really went out there and executed it for a large part of that game," Marinkovich said.

Silver Ferns coach Noeline Taurua rang the changes at the beginning of the second quarter, bringing Grace Nweke on for Metuarau and Claire Kersten into the defensive end, but it was to no avail, as the Diamonds extended their lead.

"They've got so many variations that they can go to, as well as using their interchange," Marinkovich explained of the Silver Ferns' tactics.

"We were fully aware Noeline was coming to use different combinations. She has done [that] before, and all coaches here have got a bigger vision towards the Commonwealth Games. I know we've seen a little taste of that, and they've seen a combination of ours."

It didn't seem to matter what the Silver Ferns tried, they were unable to get any traction in the match, and were unable to find rhythm in their ball movement.

The third quarter continued Australia's domination, as the Diamonds blew out the lead as Gretel Bueta and Steph Wood ran riot in the circle. The Diamonds put together an eight goal streak to start the quarter, allowing them to blow the score out, despite New Zealand making defensive adjustments.

"I think you can't underestimate New Zealand at all and we came out of half time knowing that there's a chance that they're going to surge on us," Watson explained after the game.

"They've done that before, so you can't relax at all. No matter if you're 15, 16 goals up, you do not feel safe and comfortable against the team like the Ferns.

OVER A THIRD – QUAD SERIES PREDICTIONS AND DIAMONDS’ SEVEN

Bueta was particularly dominant, as she showed off her agility and athleticism, troubling both Kelly Jury and Sulu Fitzpatrick through the first three quarters. The combination with Wood was made more effective by Wood's long-range shooting, It meant that the Silver Ferns couldn't settle in defence and take away the baseline, because Wood would torch them from distance, and if they went to meet Wood at her arc, she would find Bueta under the post.

Watson explained after the game how important Wood's performance was.

"Steph is such a playmaker out there on the court, so it's almost like another feeder for us. She reads the play so well, I think they did an amazing job, the way they were able to fend off the defenders and draw the attention of the player we didn't want to give the ball to and have a really clear option.

"We spoke about being patient, being clear with how we're moving, where the ball needs to be placed, and I think we executed that well for the majority of the game."

The fourth quarter was won by New Zealand, who piled on 10 goals to Australia's six, as Cara Koenen, Jamie-Lee Price and Sarah Klau all played out on the court. Klau racked up four gains in her time on court, and had a few minutes at the end recreating her NSW Swifts' partnership with Maddy Turner.

With a final score of 53-39, the Diamonds made an early statement to start the Quad Series, and after an extended period of no international netball, there will be an element of relief for the team after the extended break.

Brazill also spoke after the game about her player of the match performance, and the team performance.

"It's very nice to be back in the green and gold, especially with Lizzie [Watson], with us both having a year off in different years, makes you definitely love the game more, and makes you really respect the dress that you get to play in playing for your country.

"Super excited that we got the win, but it's been really nice that we got to try the structures that we've been working on for the last year and actually finally get an opportunity to see if it actually works."

Both teams will take the knowledge of which combinations worked and which didn't as they prepare for the remaining matches of the Quad Series.

"I think they're going g to learn so much for that, and I think whoever they play next is probably going to have to watch out, because they won't be happy with that," Watson explained of the Silver Ferns.

"They set their standards very high, so it's going to be a tough battle against them again."

The Silver Ferns next play England, while the Diamonds take on South Africa tonight.