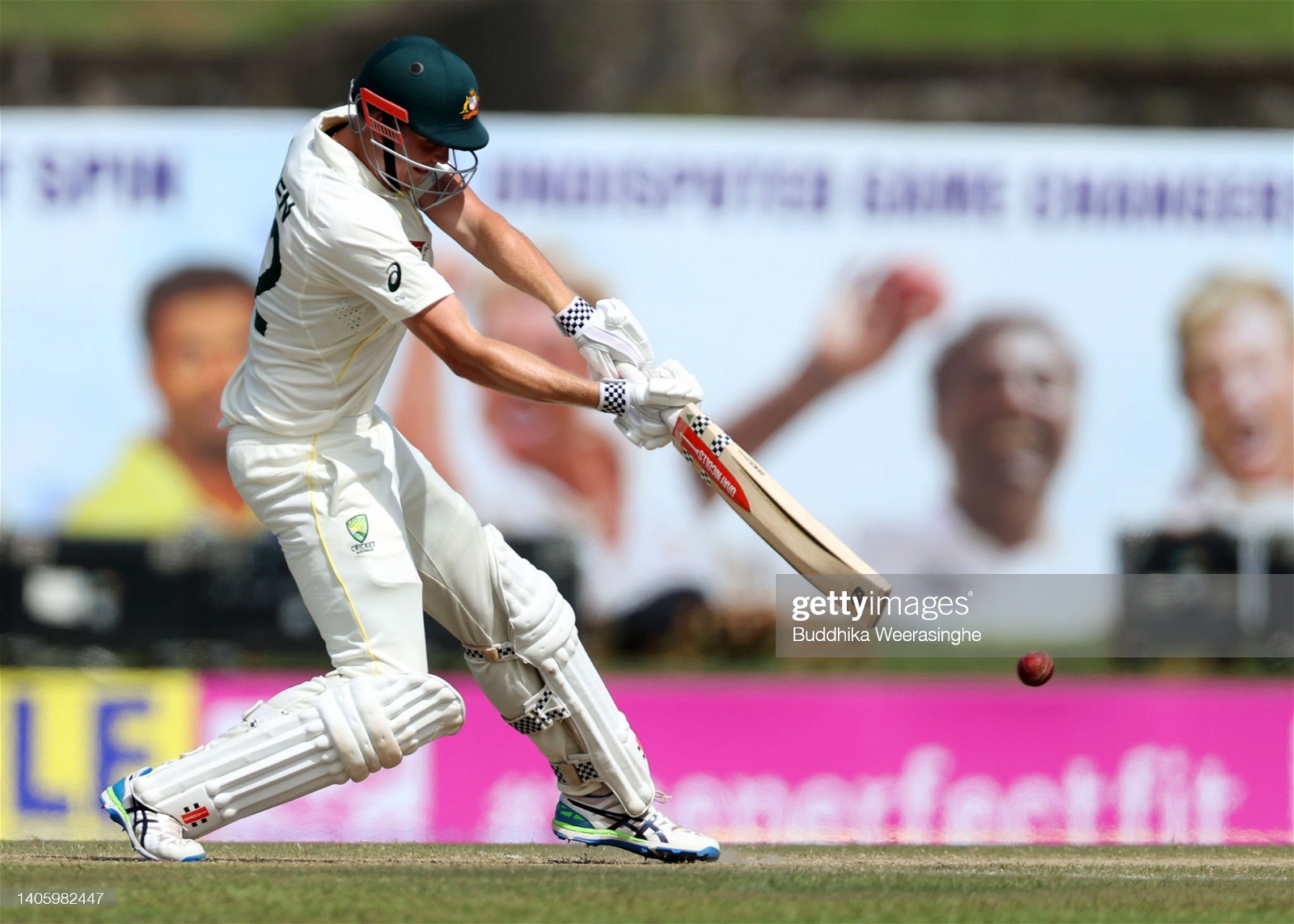 Australia dominated Day Two of the Galle Test Match against Sri Lanka, putting the tourists in a dominant position with three days to go.

Australia dominated Day Two of the Galle Test Match against Sri Lanka, putting the tourists in a dominant position with three days to go.

A big chunk of time was lost at the start of the day, as wild winds wreaked havoc in Galle, including blowing down one of the temporary grandstands. The sightscreens were also affected, and there was little play in the first half of the day.

When the Aussies did resume, at 3/98, disaster struck early, as Travis Head scooped a return catch to Dhananjaya de Silva in the second over of the day.

From there, the Aussies appeared to enjoy themselves. After being involved in a mixup last night, where Steve Smith was dismissed, Usman Khawaja started positively, passing 50 for the seventh time since he was recalled to the test setup.

Batting alongside the lanky Cameron Green, Khawaja batted aggressively, looking to sweep against the spinners.

Khawaja was eventually dismissed for 71, edging a Jeffrey Vandersay legspinner to short leg, where it was snatched up by Pathum Nissanka.

The Sri Lankans were up and about as Khawaja's wicket fell, leaving the Aussies at 5/157, and still well short of the first innings total.

As Alex Carey entered, there was a shift in the game. Carey swept mercilessly, looking to sweep or reverse sweep almost every ball. He and Green scored aggressively, putting together an 84 run partnership in just 93 balls.

Carey holed out to long off for 45, in his first shot trying to hit down the ground, skying the ball for Dinesh Chandimal to stand underneath and take.

As Carey attacked, Green started to loosen up as well, using his feet, and his reach, to tick over the strike and dominate the spinners.

Green was well past 50, and looked poised to finally score his maiden test century, when disaster struck on 77, as he was hit on the pad by Ramesh Mendis. Despite a (very optimistic) review, Green was confirmed out, and forced to wander back to the pavilion, still short of that magical milestone.

Mendis was one of the few bright lights for the home side today, as he finished the day with 4/107 from 31 overs, and clearly the most economical and threatening of the Sri Lankan bowlers.

Jeffrey Vandersay took his maiden test wicket, and then a second, when he had Mitch Starc caught and bowled, but there was no end in sight for the home side.

As the light started to fade, Nathan Lyon and Pat Cummins took them to task, as Lyon chirped, while Cummins held strong. In what was to be the final over of the day, Cummins hit two sixes and a four from one Vandersay over, including a six that landed on the road outside Galle on what was the last ball of the day before the umpires called stumps for bad light.

After the day's play, Usman Khawaja explained why he and the rest of the Australian side had taken such an aggressive attitude with the bat.

"Trying to block on that wicket too often, it's 'goodnight'. I don't know if you can see it watching the game, but that wicket is ragging. The guys have batted extremely well.

"I was laughing about it, joking with the boys that with 230 or 240 lasttime we were here for the whole game, so it's a step up on that one."

"You can lose wickets like that, in clumps, but you score quickly too. You have to be able to execute that, but it's just the way the wicket plays."

Khawaja was noticeably relaxed while batting today, smiling and laughing as he compiled his innings. He explained after the day's play that that was because he was struggling.

"The smile on my face was because it was so hard," the opener explained. "When it's not hard and you're expected to score long, you're trying to get into the game.

"It's a challenge out there - there's not much else you can do except have your area where you're trying to score runs, and there are going to be balls that do some random stuff.

"You've just got to laugh it off, so that was pretty much it."

Khawaja was full of praise for his towering batting partner today as well, commenting on how well he put together his innings, and how quickly he has adapted to the dusty conditions.

Green was the top scorer for the innings, and as a young allrounder, innings like today's will solidify his importance to the Australian side.

"He batted beautifully. It took a lot of courage the way he batted, when he came out and played the sweep shot straight away. It's one of the toughest wickets I've played on, so the way he came out and batted was a credit to Greeny.

"I just kept trying to help him throughout his innings, just tried to help him with the right sort of messaging to keep him going, for what I thought was the right play on the wicket, but most of it's just about intent. And then he's the one who has to actually do it."

Australia will resume at 8/313 tomorrow, with Nathan Lyon and Pat Cummins at the crease, with a lead of 101 runs.