This years Grammys were filled with amazing performances and a few upsets with Jon Batiste's We are winning the Grammy for Album of the Year. As well as Olivia Rodrigo and Silk Sonic winning other major categories 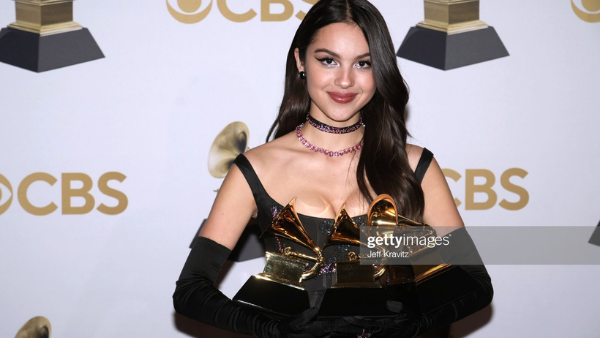 This years Grammys were filled with amazing performances and a few upsets with Jon Batiste'sWe arewinning the Grammy for Album of the Year. As well as Olivia Rodrigo and Silk Sonic winning other major categories

The Grammys were held in Las Vegas with South African Comedian Trevor Noah taking the reigns as host.

It only took seven minutes into the broadcast for Noah to bring up the infamous Chris Rock and Will Smith incident but all in all it was a great night.

There were many outstanding performances with one of them being upcoming artist Olivia Rodrigo turning the stage into a suburban street to sing her 2021 hitdriver's licence.

Billie Eilish took to the stage to perform her hit Happier Than Ever which left the audience as well as viewers at home with goosebumps.

During the In Memoriam segment among a medley of songs was West Side Stories Rachel Zegler who performedSomewherefrom the film which didn't leave a dry eye in the house.

BTS took to the stage to perform their smash hitButterwith a spy like opening sequence.

Although if there was one artist that stole the show it was H.E.R who performed a medley of songs. She was firstly joined on stage by Jam and Lewis who was on the bass while she sang her hit songdamage.

She was then joined by Lenny Kravitz as they performedAre You Gonna Go My Way?with Travis Barker on the drums.

THREE ALBUMS FROM AUSTRALIAN ARTISTS COMING OUT THIS APRIL

Silk Sonic surprised many by taking out the award for Record of the Year and Song of the Year forLeave The Door Open.

Although the biggest award of the night went to Jon Batiste who etched out the likes of Taylor Swift'severmore, Olivia Rodrigo'ssourand Lil Nas X'sMonteroto win Album of the Year for his albumWe are.

Jack Antonoff who worked with the likes of Lana Del Rey and Taylor Swift won the Grammy for Best Producer (Non-Classical). With Lana Del Ray taking to social media to praise the producer on the award.

Album of the year

Jon Batiste –We Are

HER –Back of My Mind

Record of the year

ABBA –I Still Have Faith in You

Lil Nas X –Montero (Call Me by Your Name)

Jon Batiste –We Are

HER –Back of My Mind

Song of the year

HER –Fight for You

Lil Nas X –Montero (Call Me by Your Name)

Jason Aldean and Carrie Underwood -If I Didn’t Love You

Ryan Hurd and Maren Morris -Chasing After You

AC/DC –Shot in the Dark

Black Pumas –Know You Better (Live From Capitol Studio A)

Chris Cornell –Nothing Compares 2 U

Foo Fighters -Waiting on a War

Weezer -All My Favorite Songs

Kings of Leon -The Bandit

Chris Cornell –No One Sings Like You Anymore Vol. 1

Halsey -If I Can’t Have Love, I Want Power

Jazmine Sullivan –Pick Up Your Feelings

Jon Batiste –I Need You
BJ the Chicago Kid, PJ Morton and Kenyon Dixon featuring Charlie Bereal –Bring It on Home to Me
Leon Bridges and Robert Glasper –Born Again

HER –Fight for You

Lucky Daye featuring Yebba –How Much Can a Heart Take

Jazmine Sullivan –Pick Up Your Feelings

Tyler, the Creator –Call Me If You Get Lost

Maren Morris –Better Than We Found It

Chris Stapleton –You Should Probably Leave

Luke Combs -Forever After All

Jason Isbell -All I Do Is Drive

Producer of the year, non-classical

Lewis Black -Thanks for Risking Your Life