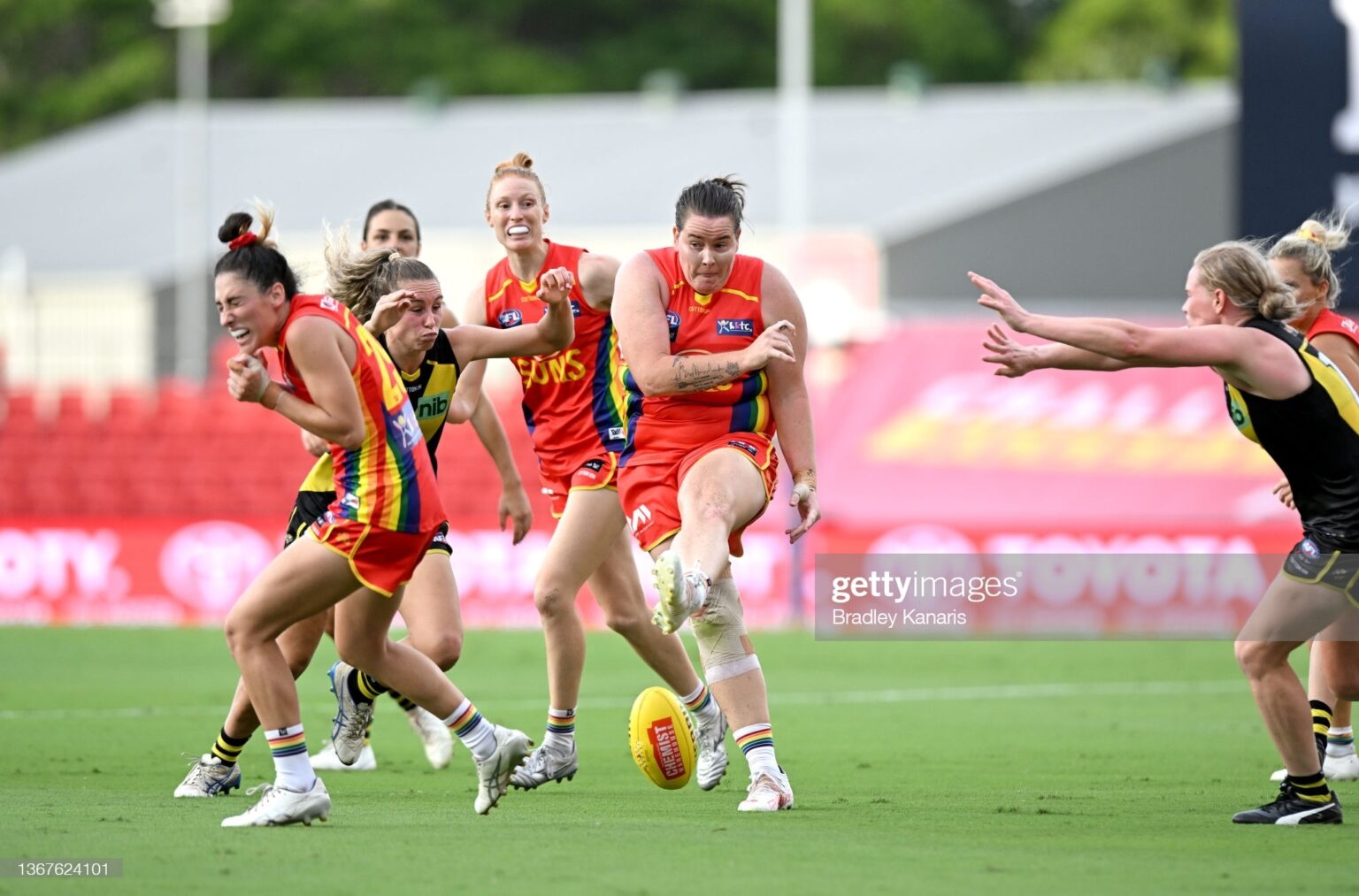 The Gold Coast Suns hung on in a thriller to defeat the Richmond Tigers by two points and record back to back wins for the first time in their AFLW history.

The Gold Coast Suns hung on in a thriller to defeat the Richmond Tigers by two points and record back to back wins for the first time in their AFLW history.

The Gold Coast Suns found an extra gear late to overrun a fast-finishing Richmond Tigers side, and were lucky that inaccuracy did not cost the Suns a second consecutive win.

The Suns won their Round Two match, but missed their Round Three clash due to Covid-19. At the first bounce today, the Suns had never won back to back games, but it didn't seem to weigh on the team.

The Suns came to play, with a fast start. They were wasteful with the ball, however, and at the first break had a five-point lead, after each Tara Bohanna and Katie Brennan goaled in the first quarter.

The Tigers continued to bring defensive pressure on the Suns, with Bohanna and Sarah Perkins playing strong hands in attack against the Tigers defence.

That display of pressure was on show as Monique Conti saved a certain goal with a brilliant run down tackle in the goalsquare.

Tessa Lavey cut through for the Tigers to kick their second, as she backed up from her WNBL performance yesterday.

Perkins goaled from outside 50 late in the second, after her attempted pass to the top of the square ran away from the play and bounced through.

Bohanna then provided her own magic with a bending, bouncing goal just seconds later, to put the Suns in front at the break.

The Tigers pressure was enough to slow a tough Gold Coast forward line, who had 25 inside 50s in the first half, with the Tigers having just seven. Despite that, the gap was just four points at half time.

The Tigers continued their strong play in the third quarter, as they kicked two goals straight in the third term, and kept the Suns scoreless.

Monique Conti had ten tackles for the match (to go with 21 disposals) as she continued her strong start to the season.

Kate Dempsey and Jess Hosking were also key for the Tigers through the middle of the field, with 19 and 16 disposals respectively.

But the Tigers pressure wasn't enough, as the Suns fought their way back into the match, behind Ali Drennan and Charlie Rowbottom. Drennan continued to show up time and again at every contest as she put her aerobic capacity on display, while Rowbottom reminded everyone of the silky skills that saw her picked as the Number One draft pick.

As the match wore on, the Suns seemed to be coming harder, but were unable to get ahead of Richmond on the scoreboard. The Tigers continued to hang on as Kate Surman goaled early in the last, with a bomb from the edge of the 50.

The decisive moment was with about seven minutes to play, as Drennan cleared the ball from a stoppage inside the Suns forward 50. The ball dribbled to Perkins, who showed her lightning-quick hands to set the ball up for Cheyenne Hammond, who ran into the open goal square to put the Suns in front, in what was eventually the match-winner.

Gold Coast was then forced to weather a Tiger storm, as Richmond through everything it had at the ball and the contest to try and get in front.

There were multiple opportunities for the Tigers, but they were unable to convert in front of goal, and the Suns continued to find ways to push the ball forward and lock it in the midfield.

Along with Drennan, Perkins and Rowbottom, the Suns had unheralded stars, as Jade Pregelj went down, with Kalinda Howarth throwing everything on the line to touch a Katie Brennan snap with less than two minutes on the clock.

In the end, the Suns held on 39-37 as the final siren sounded, showing maturity beyond their experience in the dying moments.

Jamie Stanton also filled her role for the day as well, picking up 19 disposals, and doing everything she could to slow down Conti, who she ran with throughout the match.

The Suns will take the back to back wins for the first time in their history as they prepare for Melbourne in the next round, while the Tigers will hope to arrest their three-game losing streak against the Western Bulldogs.