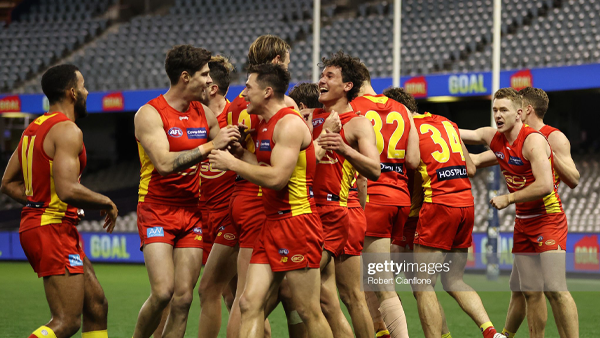 Gold Coast AFL Season Preview: Will the Suns shine even after losing their King?

After finishing in the bottom four last season, the Gold Coast Suns will be lead into 2022 with a new co-captain and a coach in the final year of his contract, all hoping for a change of fortune.

Gold Coast AFL Season Preview: Will the Suns shine even after losing their King?

After finishing in the bottom four last season, the Gold Coast Suns will be lead into 2022 with a new co-captain and a coach in the final year of his contract, all hoping for a change of fortune.

The Gold Coast Suns finished last season down towards the bottom of the ladder, however, with a new co-captain in Touk Miller leading the side, can the club do enough for its maiden finals appearance, and ease the pressure of coach Stuart Dew's final year of his contract?

The Gold Coast Suns started the 2021 season with three wins across the first seven rounds, which included back-to-back wins; a 40-point victory over to-be elimination finalists Sydney, and a 24-point win over 2020 semi-finalists Collingwood.

However, as the season wore on, the Suns either lost games they might've been expected to win if they wanted to show progress (such as Round Eight's nine-point loss to St Kilda and Round 15's nine-point loss to North Melbourne). However, they showed some fight with shock wins against Richmond and Greater Western Sydney, however, it was marred by big losses at the end of the season.

During the off-season, the Suns weren't too prolific in the trade and draft periods, but have added some much-needed assistance to their list in key areas. As well, the young players the club has recruited in previous seasons look to come to fruition.

The Suns' first hit-out of 2022 was apre-season practice match against Port Adelaidein which the side won by 21 points, highlighted by off-season addition, former Tiger Mabior Chol's three goals in a victory that saw many scoring chances created and plenty of other contributors looking to set up a big 2022.

WHERE CAN THEY IMPROVE?

Gold Coast will need to improve upon its ball use inside 50 especially if it's to create chances and avenues towards goals and improve the side's scoring abilities, which will have to be more of a team effort withBen King's pre-season season-ending ACL injury.

The Suns were ranked last in the league for goals, and goal assists per game in 2021, and without their key forward target, it could present more headaches for the club who need to find a worthy replacement so this issue isn't repeated, in a worse way.

The pre-season practice match against Port Adelaide appeared to have identified this area of concern, and as such, through Mabior Chol (three goals) and Josh Corbett (two goals), that shared load should hopefully become the norm for this season, with contributions from other talls, and smalls.

The Suns have the capacity to work the ball from the middle of the ground, in centre clearances, and even through transition from the backline, all varied ways to get inside 50 cleanly and efficiently, though the midfield unit will need to ensure their kicks reach the intended targets, finding an appropriate amount of space, and hope the forwards can finish off the work.

The Gold Coast Suns had minor spurts of brilliance and got on the end of a few upset victories throughout the 2021 season, however, were involved in some heavy losses at the same time, especially across the final month of the campaign.

The 2021 season started off on a sour note - despite a 59-point Round Two win against North Melbourne - with co-captain and 2019 Club Champion, first-choice ruck Jarrod Witts succumbing to a season-ending ACL injury in Round Three. It meant the club's ruck stocks were tested, with Zac Smith and Chris Burgess managing the increased workload.

The highlights of Gold Coast's campaign last year was a 10-point victory against reigning premiers Richmond in Round 16, and a 40-point win against Sydney in Round Six.

However, as mentioned before, the margins of the Suns' losses far outweighed the wins, with a 98-point loss to eventual premiers Melbourne in Round 20 and an 87-point loss to Sydney in Round 23, contributing to a lowly finish for the club.

The Suns' midfield is their biggest strength, although, with the unfortunate departure of Hugh Greenwood who had some of his best years in the league with the club, it might just be tested again, however, the make-up of the on-ball unit is there and ready to fire once more.

Reigning Club Champion Touk Miller enjoyed a career-best year in the middle last season and will be assisted by the experienced ex-two-time-premiership Tiger Brandon Ellis, former co-captain David Swallow, and former Docker Lachie Weller. The midfield unit will be rounded out by the younger players such as Matt Rowell, Noah Anderson, Charlie Constable and Jeremy Sharp.

While the loss of Greenwood will be felt in a big way, not only as a senior player who has been at the top-level in the competition since 2017 but also as an attacking, in-and-under player who was able to get the Suns out of unfavourable situations within games. However, the midfield proved its strength last year, and with the emergence of those young players, will be strong again this year in picking up the pieces.

The team's performance at either end of the ground, in defence, and in the forward line, are both areas in which the Suns need to improve. The club found it difficult to kick an adequate number of goals in 2021, while at the same time, giving up too many scores to opposition sides.

On the defensive end, Gold Coast was the sixth-ranked team for intercepts (69.6 per game) and fifth for one-percenters (50.2), however, that could be down to the fact that there was a lot of work going the way of the defenders. As such, it could be the reason why the Suns had the most rebound 50s on average (42.9 per game), due to the amount of traffic opposition side's generated in their own forward half.

In front of their own goals, the Suns saw a low number of shots on goal, which didn't always translate to accurate shots either with the Suns averaging 9.1 goals a game and 6.0 goal assists per game (both the lowest totals in the league).

While there was no issue with the Suns' entry inside 50 (averaging 48.7 inside 50s per game), keeping the ball in there, and finding a marking target was where the Suns found a real problem, even if the club's leading goalkicker Ben King (47 goals) took 2.1 marks a game, followed by the club's second-highest goalscorer Josh Corbett (23 goals) averaging 1.9 marks per game.

While King was a shining light for the Suns in 2021, he won't be featuring throughout the 2022 season after sustaining an ACL injury that will see him sitting on the sidelines and missing the entire year. It's a bitter blow to a team that has been reliant on him up forward in previous years but means that incoming former Tiger Mabior Chol and former Blue Levi Casboult might need to step up their duties more than they were anticipating and be assisted by talls Corbett, Sam Day, and Nick Holman.

While it's easy enough to select third-year player Matt Rowell to be the Suns' rising star in 2022, in only 17 games he's already proved his capabilities at the top level, and stamped his credentials on being one of the best prospects of the competition, shaping to be a high-quality player in years to come.

However, Jeremy Sharp showed glimpses of what he can do out on the park last year and is definitely ready to take his game to the next step.

After playing in two games throughout his debut 2020 season, Sharp played nine games towards the back-end of the season in 2021. While down in performance against Melbourne and Sydney in the final stretch of the season, Sharp was otherwise a handy performer for Gold Coast, averaging 18.33 disposals on the year, including back-to-back weeks of 30+ touches.

He picked up his first Brownlow Medal vote of his career, polling a single vote in Round 18 - where he also picked up a Rising Star nomination - against the Western Bulldogs. It was a game where he tallied 30 disposals, 10 marks, two tackles and seven rebounds in the losing side.

Playing primarily as a winger, he's had to compete for a spot with the likes of Rory Atkins and Brandon Ellis, but through his athleticism with endurance and acceleration top factors to his game, Sharp should be looking to take another step forward, which should be noticed by all within the game as he tries to cement his place in the side, and the competition as a whole.

The Gold Coast Suns have all the makings of a team that can perform well at the best of times, and need this to be exemplified more often if the club is keen to make up for dismal results in the past, and work through any past scrutiny levelled towards the club.

Injuries have and will continue to play a major part in the Suns' fortunes in 2022, and while the replacements won't reach the heights of those that will be missing, a hopeful team effort without relying on just one player, might share the load and feel like a team-focused environment is being created.

The younger players, now entering their formative years in the AFL need to step up just as much as the senior players and show where the future of the Gold Coast Suns is headed. A cohesive effort from all players on the list, in training and on game-day should be encouraged by the coaching staff, none more than Stuart Dew, who has plenty of pressure on him already regarding the very real inevitable possibility his tenure will be up, either way, come the end of the season.