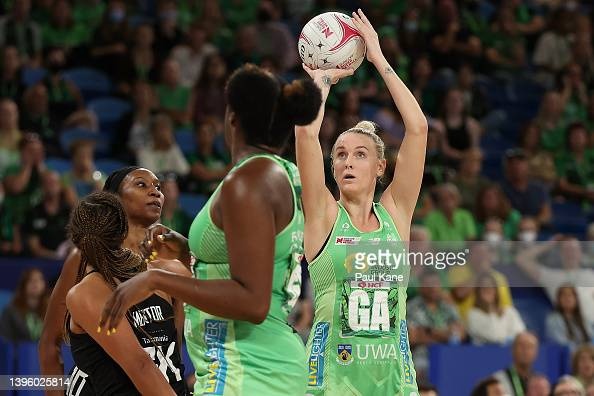 The Collingwood Magpies and West Coast Fever put on a show for fans at RAC Arena, with Sasha Glasgow coming in clutch for the Power Five.

The Collingwood Magpies and West Coast Fever put on a show for fans at RAC Arena, with Sasha Glasgow coming in clutch for the Power Five.

In a nail-biting match, the Collingwood Magpies took on the West Cover Fever in their hometown, but went down 74-69.

Team Girls Cup and then in Round Two. The Fever won both, dominating in Round Two 70-53. Whether they won or lost, the Magpies had the potential to be in the top four on the ladder. If they were to win, they would also have three straight wins for the first time in the season.

Prior to the game, we learned that two key players would be missing. Gabby Sinclair was missing due to illness, replaced by Nyah Allen. Earlier in the season, Allen played in shooter Sophie Garbin’s place for two games. Although she was on the team list, she didn’t take the court until late in today’s game, despite playing the full 60 minutes earlier in the season.

Fever’s Vice Captin Jess Anstiss was also out, due to a foot injury. Extended squad member Zoe Cransberg was named as her replacement and listed as a substitute. Cransberg wasn’t on court immediately, subbed in and out throughout the game.

The Magpies got an early turnover from the Fever’s centre pass, but lost the ball at their end, allowing Jhaniele Fowler to make the first goal. Early on, Courtney Bruce was coming in hot, with several deflections to her name. The Magpies were staying patient, making sure to get points from every ball.

Both teams’ defensive pressure was intense, causing a back and forth battle, before the Magpies scored. It was an intercept from Jodi-Ann Ward that allowed the Magpies to get ahead for the first time in the game. Now two up, it was super shot time.

Up until this round, the Magpies were ranked the worst in the tournament for super shots, sinking only 46 per cent. On the other hand, the Fever were the best ranked, with 55 per cent. It was Garbin who attempted the first of the game, with her miss allowing the Fever to even the score once again. By the end of the quarter, the score was 17-16, with the Fever staying ahead with a goal in the closing 30 seconds.

One key matchup in the game was between international icons Geva Mentor and Jhaniele Fowler. The last time they played, Mentor was a little quiet, although defending the best team in the competition for offensive rebounds is no easy feat. Mentor’s Nissan Net Points are reflective of just how good Fowler is, scoring very low in comparison to games against other opponents.

In the second quarter, it was the Magpies once again who got the first break in the scores, although Bruce quickly changed this. Cransberg first entered the game at centre five minutes into the quarter, in just her second SSN game. The game was continuing to be a tight contest, with the margin only ever reaching two points. With six minutes left to go, Coach Dan Ryan called a tactical time out, closing with one simple mantra: “We want ball.”

Following the time out, Rudi Ellis came on as goal keeper, pushing Bruce out to replace Sunday Aryang. This quarter, the super shot didn’t seem to be on anyone’s mind until Sasha Glasgow made her attempt. Despite her miss, it was easily rebounded by Fowler, showing how riskless a super shot attempt is for the team.

Garbin took her chance as well, this time getting the two-point shot. This allowed the Magpies to have a slight edge on the Fever in the final minutes. Jodi-Ann Ward was doing a fantastic job of keeping Glasgow unavailable for a two-point shot. Garbin went for her second super shot of the quarter, with Bruce getting her hand in to allow the Fever to equalise once again. On the buzzer, Glasgow made her fourth shot of the game, tying the quarter and keeping the Fever one up.

Glasgow's super shot ability was something the Magpies needed to watch out for, and something coach Nicole Richardson discussed post-match.

"Sasha's had a hot hand in that range this season, so we needed to make sure we did cover that and try to limit that," Richardson said.

"Unfortunately, to Sasha's credit, she found space in that last five minutes and was able to put in some two-point shots which got them back in the game and eventually won the game for them."

After halftime, the Fever came out strong, with an early turnover putting them two ahead. The Magpies responded quickly, with the defensive end causing the teams to be neck and neck once again. With such a back and forth game, it wasn’t long before the Fever attempted to storm ahead. Richardson called a timeout for the Magpies, allowing the team to regroup before things started getting out of hand.

At the power five buzzer, it was time for the Magpies to decide how they wanted to play it out. Take the risk and potentially let the Fever make easy shots to get ahead? Or play it safe and hope for some turnovers? They stuck with the one-point shots until the final 30 seconds, with Garbin putting the Magpies ahead. Closing the quarter, 19-16, the Magpies' chances were looking optimistic, 54-52. If they could hold on for another 15 minutes, the win would be theirs.

For the fourth quarter, Aryang was in wing defence, swapping with Stacey Francis-Bayman who took on Garbin at goal defence. Emma Cosh also came in for Glasgow at goal attack for the Fever. Ryan commented on this change post-match:

"We were struggling to impact across that transverse line, we had to keep searching for answers to try and see if we could make them a bit uncomfortable and get hands on ball.

"That last-minute switch of Sunday across the wing caused a bit of confusion for them, and I thought Stacey Francis-Bayman's hustle around the circle, and inside, particularly, started that momentum swing in our favour."

In the final 10 minutes, the Magpies were up three and on their centre pass. The Fever’s defensive end were starting to show some desperation, whilst the Magpies remained patient. With eight minutes to go, Ryan called a timeout, giving his team a much-needed pep talk. Finally, Francis-Bayman made a turnover, cheered on loudly by the crowd.

Immediately as the power five siren sounded, Glasgow made her move, her super shot making the scores equal before the Magpies' centre pass. Once the ball was at the Fever’s end, she made another, putting them ahead for the first time in the quarter.

By the time the score reached 67-65, Richardson called a tactical time out for the Magpies, asking her team to stick with the one-point shots for the time being. She commented on this decision post-match, "it was still about 3-and-a-half, four minutes to go... I'm still happy with that, we actually didn't even get the ball to a shot anyway, so that didn't really play into it.

"I think we lost the ball with Sophie throwing it out of court, and we lost one bouncing back to the outside of the circle. Not at all happy with how we played that last five minutes from a strategic perspective, we just weren't able to execute."

With three minutes to go, Allen came in at goal attack for the first time in the game.

During her gameplay earlier in the season, Allen sunk six of her 13 super shot attempts, putting her slightly ahead of Garbin.

In the blink of an eye, the Fever were five up with a minute left.

With the weight of the team on her shoulders, Allen made her first attempt at a goal for the game, a super shot. Despite her shot making it, time had run out for the Magpies.

With a 22-15 quarter, the Fever were victorious. The 74-69 win puts them on the top of the ladder, pushing the Melbourne Vixens down to second place.

Post-match, Ryan commented on the win: "I thought Magpies were sensational throughout the entire game, and really had our backs against the wall for most of it, to be honest.

"Really proud of my group to know that when the pressure was on and the game was in the balance, they had that ability to lean into it and make it happen. Really pleased to get that win today, because it was bloody tough out there."

The West Coast Fever will play the Sunshine Coast Lightning on Saturday at USC Stadium. The Magpies will head to Tasmania to play the Firebirds on Sunday.